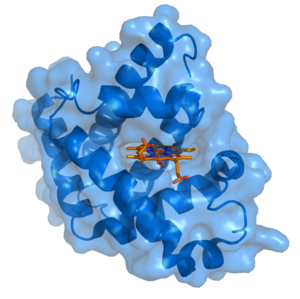 Myoglobin (blue) with its ligand heme (orange) bound. Based on PDB 1MBO
For other uses of "Ligand", see Ligand (disambiguation).

In biochemistry and pharmacology, a ligand (from the Latin ligandum, binding) is a substance that forms a complex with a biomolecule to serve a biological purpose. In a narrower sense, it is a signal triggering molecule, binding to a site on a target protein.

The binding occurs by intermolecular forces, such as ionic bonds, hydrogen bonds and van der Waals forces. The docking (association) is usually reversible (dissociation). Actual irreversible covalent binding between a ligand and its target molecule is rare in biological systems. In contrast to the meaning in metalorganic and inorganic chemistry, it is irrelevant whether the ligand actually binds at a metal site, as is the case in hemoglobin.

Radioligands are radioisotope labeled compounds and used in vivo as tracers in PET studies and for in vitro binding studies.

The interaction of most ligands with their binding sites can be characterized in terms of a binding affinity. In general, high affinity ligand binding results from greater intermolecular force between the ligand and its receptor while low affinity ligand binding involves less intermolecular force between the ligand and its receptor. In general, high affinity binding involves a longer residence time for the ligand at its receptor binding site than is the case for low affinity binding. High affinity binding of ligands to receptors is often physiologically important when some of the binding energy can be used to cause a conformational change in the receptor, resulting in altered behavior of an associated ion channel or enzyme. 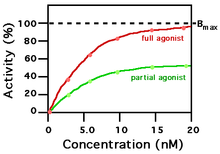 In the example shown to the left, ligand-binding curves are shown for two ligands with different binding affinities. Ligand binding is often characterized in terms of the concentration of ligand at which half of the receptor binding sites are occupied, known as the dissociation constant (Kd). The ligand illustrated by the red curve has a higher binding affinity and smaller Kd than the ligand illustrated by the green curve. If these two ligands were present at the same time, more of the higher-affinity ligand would be bound to the available receptor binding sites. This is how carbon monoxide can compete with oxygen in binding to hemoglobin, resulting in carbon monoxide poisoning.

Binding affinity is most commonly determined using a radiolabeled ligand, known as hot ligand. Homologous competitive binding experiments involve binding-site competition between a hot ligand and a cold ligand (untagged ligand).[1] Non labelled methods such as surface plasmon resonance and dual polarisation interferometry can also quantify the affinity from concentration based assays but also from the kinetics of association and dissociation, and, in the later case, the conformational change induced upon binding. Recently, Microscale Thermophoresis (MST), an immobilization-free method[2] was developed. This method allows to determine the binding affinity without any limitation to the ligand's molecular weight.[3]

For the use of statistical mechanics in a quantitative study of the ligand-receptor binding affinity, see the comprehensive article[4] on the configuration integral.

Binding affinity data alone does not determine the overall potency of a drug. Potency is a result of the complex interplay of both the binding affinity and the ligand efficacy. Ligand efficacy refers to the ability of the ligand to produce a biological response upon binding to the target receptor and the quantitative magnitude of this response. This response may be as an agonist, antagonist, or inverse agonist, depending on the physiological response produced.[5]

Selective ligands have a tendency to bind to a very limited types of receptors, whereas non-selective ligands bind to several types of receptors. This plays an important role in pharmacology, where drugs that are non-selective tend to have more adverse effects, because they bind to several other receptors in addition to the one generating the desired effect.