Not to be confused with: Ion Television or Ion implantation. 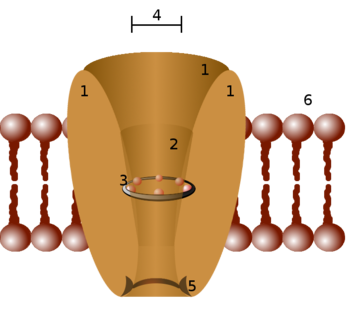 Ion channels are pore-forming proteins that help establish and control the small voltage gradient across the plasma membrane of cells (see cell potential) by allowing the flow of ions down their electrochemical gradient.[1] They are present in the membranes that surround all biological cells. The study of ion channels involves many scientific techniques such as voltage clamp electrophysiology (in particular patch clamp), immunohistochemistry, and RT-PCR.

Ion channels regulate the flow of ions across the membrane in all cells. Ion channels are integral membrane proteins; or, more typically, an assembly of several proteins. They are present on all membranes of cell (plasma membrane) and intracellular organelles (nucleus, mitochondria, endoplasmic reticulum, golgi apparatus and so on). Such "multi-subunit" assemblies usually involve a circular arrangement of identical or homologous proteins closely packed around a water-filled pore through the plane of the membrane or lipid bilayer.[2][3] For most voltage-gated ion channels, the pore-forming subunit(s) are called the α subunit, while the auxiliary subunits are denoted β, γ, and so on. Some channels permit the passage of ions based solely on their charge of positive (cation) or negative (anion). However, the archetypal channel pore is just one or two atoms wide at its narrowest point and is selective for specific species of ion, such as sodium or potassium. These ions move through the channel pore single file nearly as quickly as the ions move through free fluid. In some ion channels, passage through the pore is governed by a "gate," which may be opened or closed by chemical or electrical signals, temperature, or mechanical force, depending on the variety of channel.

Because channels underlie the nerve impulse and because "transmitter-activated" channels mediate conduction across the synapses, channels are especially prominent components of the nervous system. Indeed, most of the offensive and defensive toxins that organisms have evolved for shutting down the nervous systems of predators and prey (e.g., the venoms produced by spiders, scorpions, snakes, fish, bees, sea snails and others) work by modulating ion channel conductance and/or kinetics. In addition, ion channels are key components in a wide variety of biological processes that involve rapid changes in cells, such as cardiac, skeletal, and smooth muscle contraction, epithelial transport of nutrients and ions, T-cell activation and pancreatic beta-cell insulin release. In the search for new drugs, ion channels are a frequent target.[4][5][6]

There are over 300 types of ion channels in a living cell.[7] Ion channels may be classified by the nature of their gating, the species of ions passing through those gates, the number of gates (pores) and localization of proteins.

Further heterogeneity of ion channels arises when channels with different constitutive subunits give rise to a specific kind of current.[8] Absence or mutation of one or more of the contributing types of channel subunits can result in loss of function and, potentially, underlie neurologic diseases.

Also known as ionotropic receptors, this group of channels open in response to specific ligand molecules binding to the extracellular domain of the receptor protein. Ligand binding causes a conformational change in the structure of the channel protein that ultimately leads to the opening of the channel gate and subsequent ion flux across the plasma membrane. Examples of such channels include the cation-permeable "nicotinic" Acetylcholine receptor, ionotropic glutamate-gated receptors and ATP-gated P2X receptors, and the anion-permeable γ-aminobutyric acid-gated GABAA receptor.

There are other types of ion channel classifications that are based on less normal characteristics, e.g. multiple pores and transient potentials.

Almost all ion channels have one single pore. However, there are also those with two:

There are channels that are classified by the duration of the response to stimuli:

Channels differ with respect to the ion they let pass (for example, Na+, K+, Cl−), the ways in which they may be regulated, the number of subunits of which they are composed and other aspects of structure. Channels belonging to the largest class, which includes the voltage-gated channels that underlie the nerve impulse, consists of four subunits with six transmembrane helices each. On activation, these helices move about and open the pore. Two of these six helices are separated by a loop that lines the pore and is the primary determinant of ion selectivity and conductance in this channel class and some others. The existence and mechanism for ion selectivity was first postulated in the 1960s by Clay Armstrong.[9] He suggested that the pore lining could efficiently replace the water molecules that normally shield potassium ions, but that sodium ions were too small to allow such shielding, and therefore could not pass through. This mechanism was finally confirmed when the structure of the channel was elucidated. The channel subunits of one such other class, for example, consist of just this "P" loop and two transmembrane helices. The determination of their molecular structure by Roderick MacKinnon using X-ray crystallography won a share of the 2003 Nobel Prize in Chemistry.

Because of their small size and the difficulty of crystallizing integral membrane proteins for X-ray analysis, it is only very recently that scientists have been able to directly examine what channels "look like." Particularly in cases where the crystallography required removing channels from their membranes with detergent, many researchers regard images that have been obtained as tentative. An example is the long-awaited crystal structure of a voltage-gated potassium channel, which was reported in May 2003.[10][11] One inevitable ambiguity about these structures relates to the strong evidence that channels change conformation as they operate (they open and close, for example), such that the structure in the crystal could represent any one of these operational states. Most of what researchers have deduced about channel operation so far they have established through electrophysiology, biochemistry, gene sequence comparison and mutagenesis.

Channels can have single (CLICs) to multiple transmembrane (K channels, P2X receptors, Na channels) domains which span plasma membrane to form pores. Pore can determine the selectivity of the channel. Gate can be formed either inside or outside the pore region.

The fundamental properties of currents mediated by ion channels were analyzed by the British biophysicists Alan Hodgkin and Andrew Huxley as part of their Nobel Prize-winning research on the action potential, published in 1952. They built on the work of other physiologists, such as Cole and Baker's research into voltage-gated membrane pores from 1941.[12][13] The existence of ion channels was confirmed in the 1970s by Bernard Katz and Ricardo Miledi using noise analysis. It was then shown more directly with an electrical recording technique known as the "patch clamp", which led to a Nobel Prize to Erwin Neher and Bert Sakmann, the technique's inventors. Hundreds if not thousands of researchers continue to pursue a more detailed understanding of how these proteins work. In recent years the development of automated patch clamp devices helped to increase significantly the throughput in ion channel screening.

The Nobel Prize in Chemistry for 2003 was awarded to two American scientists: Roderick MacKinnon for his studies on the physico-chemical properties of ion channel structure and function, including x-ray crystallographic structure studies, and Peter Agre for his similar work on aquaporins.[14]

The ion channel in fine art 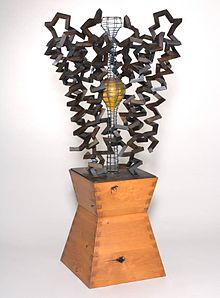 Birth of an Idea (2007) by Julian Voss-Andreae. The sculpture was commissioned by Roderick MacKinnon based on the molecule's atomic coordinates that were determined by MacKinnon's group in 2001.