Homology (biology)
For use of the term 'homologous' in reference to chromosomes, see Homologous chromosomes. 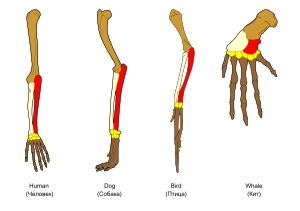 The principle of homology: The biological derivation relationship (shown by colors) of the various bones in the forelimbs of four vertebrates is known as homology and was one of Darwin’s arguments in favor of evolution.

Homology forms the basis of organization for comparative biology. In 1843, Richard Owen defined homology as "the same organ in different animals under every variety of form and function". Organs as different as a bat's wing, a seal's flipper, a cat's paw and a human hand have a common underlying structure of bones and muscles. Owen reasoned that there must be a common structural plan for all vertebrates, as well as for each class of vertebrates. 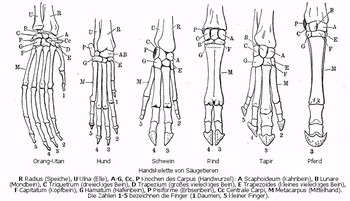 Forelimbs in mammals provide one example of homology.

Homologous[Etymology 1] traits of organisms are due to sharing a common ancestor, and such traits often have similar embryological origins and development. This is contrasted with analogous traits: similarities between organisms that were not present in the last common ancestor of the taxa being considered but rather evolved separately. An example of analogous traits would be the wings of bats and birds, which evolved separately but both of which evolved from the vertebrate forelimb and therefore have similar early embryology.

Whether or not a trait is homologous depends on both the taxonomic and anatomical levels at which the trait is examined. For example, the bird and bat wings are homologous as forearms in tetrapods. However, they are not homologous as wings, because the organ served as a forearm (not a wing) in the last common ancestor of tetrapods.[1] By definition, any homologous trait defines a clade—a monophyletic taxon in which all the members have the trait (or have lost it secondarily); and all non-members lack it.[1]

A homologous trait is often called a homolog (also spelled homologue). In genetics, the term "homolog" is used both to refer to a homologous protein, and to the gene (DNA sequence) encoding it.

The word homology, coined in about 1656, derives from the Greek homologos, where homo = agreeing, equivalent, same + logos = relation. In biology, two things are homologous if they bear the same relationship to one another, such as a certain bone in various forms of the "hand." 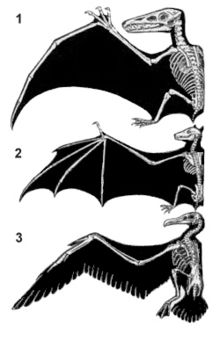 The wings of pterosaurs (1), bats (2) and birds (3) are analogous as wings, but homologous as forearms.

Shared ancestry can be evolutionary or developmental. Evolutionary ancestry means that structures evolved from some structure in a common ancestor; for example, the wings of bats and the arms of primates are homologous in this sense. Developmental ancestry means that structures arose from the same tissue in embryonal development; the ovaries of female humans and the testicles of male humans are homologous in this sense.

Homology is different from analogy, which describes the relation between characters that are apparently similar yet phylogenetically independent. The wings of a maple seed and the wings of an albatross are analogous but not homologous (they both allow the organism to travel on the wind, but they didn't both develop from the same structure). Analogy is commonly also referred to as homoplasy, which is further distinguished into parallelism, reversal, and convergence.[2]

From the point of view of evolutionary developmental biology (evo-devo) where evolution is seen as the evolution of the development of organisms, Rolf Sattler emphasized that homology can also be partial. New structures can evolve through the combination of developmental pathways or parts of them. As a result hybrid or mosaic structures can evolve that exhibit partial homologies. For example, certain compound leaves of flowering plants are partially homologous both to leaves and shoots because they combine some traits of leaves and shoots.[3][4]

Homologous structures in other phyla

Discussions of homology commonly limit themselves to the limbs of tetrapod vertebrates, occasionally touching on other structures, such as modified teeth as in whales and elephants. Homologies provide important insights into classification elsewhere in the animal kingdom, although some of them may be highly counterintuitive. For example, within the arthropods, Brusca and Brusca [5] provide the following homologies for the first 10 somites (embryonic segments) in several groups of arthropods, but add that "...the subject of head appendage homology among the arthropods is quite unsettled and highly controversial..."

Systematists identify two forms of homology: primary homology is that implied by a researcher, who states a belief that two characters share an ancestry; secondary homology is implied by parsimony analysis, where a character that only occurs once on a tree is taken to be homologous.[6]

Modifications of primary leaves, stems, and roots occur in many higher plants.

As with anatomical structures, homology between protein or DNA sequences is defined in terms of shared ancestry. Two segments of DNA can have shared ancestry because of either a speciation event (orthologs) or a duplication event (paralogs).[7]

Homology among proteins or DNA is often incorrectly concluded on the basis of sequence similarity. The terms "percent homology" and "sequence similarity" are often used interchangeably. As with anatomical structures, high sequence similarity might occur because of convergent evolution, or, as with shorter sequences, because of chance. Such sequences are similar but not homologous. Sequence regions that are homologous are also called conserved. This is not to be confused with conservation in amino acid sequences in which the amino acid at a specific position has been substituted with a different one with functionally equivalent physicochemical properties. One can, however, refer to partial homology where a fraction of the sequences compared (are presumed to) share descent, while the rest does not. For example, partial homology may result from a gene fusion event.

A sequence alignment of two proteins, produced by ClustalW

Homologous sequences are orthologous if they were separated by a speciation event: when a species diverges into two separate species, the copies of a single gene in the two resulting species are said to be orthologous. Orthologs, or orthologous genes, are genes in different species that originated by vertical descent from a single gene of the last common ancestor. The term "ortholog" was coined in 1970 by Walter Fitch.[11]

For instance, the plant Flu regulatory protein is present both in Arabidopsis (multicellular higher plant) and Chlamydomonas (single cell green algae). The Chlamydomonas version is more complex: it crosses the membrane twice rather than once, contains additional domains and undergoes alternative splicing. However it can fully substitute the much simpler Arabidopsis protein, if transferred from algae to plant genome by means of gene engineering. Significant sequence similarity and shared functional domains indicate that these two genes are orthologous genes,[12] inherited from the shared ancestor.

Orthology is strictly defined in terms of ancestry. Given that the exact ancestry of genes in different organisms is difficult due to gene duplication and genome rearrangement events, the strongest evidence that two similar genes are orthologous is usually found by carrying out phylogenetic analysis of the gene lineage. Orthologs often, but not always, have the same function.[13]

Orthologous sequences provide useful information in taxonomic classification and phylogenetic studies of organisms. The pattern of genetic divergence can be used to trace the relatedness of organisms. Two organisms that are very closely related are likely to display very similar DNA sequences between two orthologs. Conversely, an organism that is further removed evolutionarily from another organism is likely to display a greater divergence in the sequence of the orthologs being studied.

Several specialized biological databases provide tools to identify and analyze orthologous gene sequences. These resources employ approaches that can be generally classified into those that are based on all pairwise sequence comparisons (heuristic) and those that use phylogenetic methods. Sequence comparison methods were first pioneered by COGs,[14] now extended and automatically enhanced by the eggNOG[15] database. InParanoid[16] focuses on pairwise ortholog relationships. OrthoDB[17] appreciates that the orthology concept is relative to different speciation points by providing a hierarchy of orthologs along the species tree. Other databases that provide eukaryotic orthologs include OrthoMCL,[18] OMA, Roundup[19], OrthoMaM[20] for mammals, OrthologID[21] and GreenPhylDB[22] for plants.

Tree-based phylogenetic approaches aim to distinguish speciation from gene duplication events by comparing gene trees with species trees, as implemented in resources such as TreeFam[23] and LOFT.[24] A third category of hybrid approaches uses both heuristic and phylogenetic methods to construct clusters and determine trees, for example Ortholuge,[25] EnsemblCompara GeneTrees[26] and HomoloGene.[27]

Homologous sequences are paralogous if they were separated by a gene duplication event: if a gene in an organism is duplicated to occupy two different positions in the same genome, then the two copies are paralogous.

Paralogous genes often belong to the same species, but this is not necessary: for example, the hemoglobin gene of humans and the myoglobin gene of chimpanzees are paralogs. Paralogs can be split into in-paralogs, (paralogous pairs that arose after a speciation event), and out-paralogs (paralogous pairs that arose before a speciation event). Between species out-paralogs are pairs of paralogs that exist between two organisms due to duplication before speciation, whereas within species out-paralogs are pairs of paralogs that exist in the same organism, but whose duplication event happened before speciation. Paralogs typically have the same or similar function, but sometimes do not: due to lack of the original selective pressure upon one copy of the duplicated gene, this copy is free to mutate and acquire new functions.

Paralogous sequences provide useful insight into the way genomes evolve. The genes encoding myoglobin and hemoglobin are considered to be ancient paralogs. Similarly, the four known classes of hemoglobins (hemoglobin A, hemoglobin A2, hemoglobin B, and hemoglobin F) are paralogs of each other. While each of these proteins serves the same basic function of oxygen transport, they have already diverged slightly in function: fetal hemoglobin (hemoglobin F) has a higher affinity for oxygen than adult hemoglobin. Function is not always conserved, however. Human angiogenin diverged from ribonuclease, for example, and while the two paralogs remain similar in tertiary structure, their functions within the cell are now quite different.

It is often asserted that orthologs are more functionally similar than paralogs of similar divergence, but several papers have challenged this notion [28] [29] [30] .

Ohnologous genes are paralogous genes that have originated by a process of whole-genome duplication (WGD). The name was first given in honour of Susumu Ohno by Ken Wolfe.[31] Ohnologs are interesting for evolutionary analysis because they all have been diverging for the same length of time since their common origin.

Homologs resulting from horizontal gene transfer between two organisms are termed xenologs. Xenologs can have different functions, if the new environment is vastly different for the horizontally moving gene. In general, though, xenologs typically have similar function in both organisms.[32]

Gametology denotes the relationship between homologous genes on nonrecombining, opposite sex chromosomes. Gametologs result from the origination of genetic sex determination and barriers to recombination between sex chromosomes. Examples of gametologs include CHDW and CHDZ in birds.