This article is about the plant family. For the former genus Cactus, see Mammillaria, Melocactus, and Opuntia. For other meanings, see Cactus (disambiguation)
"Cacti" redirects here. For the software, see Cacti (software).

A cactus (plural: cacti, cactuses or cactus) is a member of the plant family Cactaceae. Their distinctive appearance is a result of adaptations to conserve water in dry and/or hot environments.[1][2][3] In most species, the stem has evolved to become photosynthetic and succulent, while the leaves have evolved into spines. Many species are used for ornamental plants, and some are also grown for fodder, forage, fruits, cochineal, and other uses.

Cacti come in a wide range of shapes and sizes. The tallest is Pachycereus pringlei, with a maximum recorded height of 19.2 m,[4] and the smallest is Blossfeldia liliputiana, only about 1 cm in diameter at maturity.[5] Cactus flowers are large, and like the spines arise from distinctive features called areoles.

The cactus family is native to the Americas, where their range extends from Patagonia to southern Canada, but they are densest and most diverse in the regions of northern Mexico and the southern tropics of Argentina and Bolivia. Rhipsalis baccifera is the one exception; it is native to both the Americas and the Old World, where it is found in tropical Africa, Madagascar, and Sri Lanka. It is thought to have colonized the Old World within the last few thousand years, probably by being carried as seeds in the digestive tracts of migratory birds. Many other species have become naturalized outside the Americas after having been introduced by people, especially in Australia, Hawaii, and the Mediterranean region. Cacti inhabit diverse regions, from coastal plains to high mountain areas.

With a few exceptions, cacti are succulent plants and, like other succulents, they have a variety of adaptations that enable them to survive in hot and dry environments. 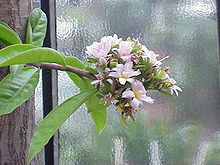 Pereskia grandifolia: Pereskia is a weakly succulent genus, which also possesses leaves, and is believed to be similar to the ancestor of all cacti. 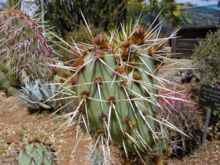 Many species of cactus have long, sharp spines.

In most species of cacti the leaves have evolved into spines which not only defend the cactus against herbivores but also provide shade that lowers the plant's water loss through transpiration. The spines grow from specialized structures called areoles, homologous to the nodes on other plants. Very few members of the family have leaves, and when present these are usually rudimentary and soon fall off; they are typically awl-shaped and only 1–3 mm. long. Two genera, Pereskia and Pereskiopsis, do however retain large, non-succulent leaves 5–25 cm long, and non-succulent stems. Pereskia has now been determined to be the ancestral genus from which all other cacti evolved.[6] Enlarged stems carry out photosynthesis and store water. Unlike other succulents, the stem is the only part of many cacti where this takes place. Cacti often have a waxy coating on their stems to prevent water loss and potentially repel water from their stems. Because of the plants' high water-retention ability, detached parts of the plant can survive for long periods and then grow new roots from anywhere on the plant body when rain comes.

The bodies of many cacti have become thickened during the course of evolution, and form water-retentive tissue that is in the optimal shape of a sphere or cylinder (combining highest possible volume with lowest possible surface area). By reducing its surface area, the body of the plant is also protected against excessive sunlight. The plant body itself is also capable of absorbing moisture (through the epidermis and the spines), which is especially important for plants that receive most of their moisture in the form of fog.

Most cacti have a short growing season and long dormancy. For example, a fully-grown saguaro (Carnegiea gigantea) can absorb up to 3,000 liters of water in ten days[citation needed]. This is helped by the ability to form new roots quickly. Two hours after rain following a relatively long drought, root formation begins in response to the moisture. Apart from a few exceptions, an extensively ramified root system is formed, which spreads out beneath the surface. The salt concentration in the root cells is relatively high,[7] so when moisture is encountered it is quickly absorbed.

Cacti often have very shallow roots that spread out widely close to the surface to collect water, an adaptation to infrequent rains. In one case, a young saguaro only 12 cm tall had a root system covering an area 2 m in diameter, but with no roots more than 10 cm deep.[8] The larger columnar cacti also develop a taproot, primarily for anchoring, but also to reach deeper water supplies and mineral nutrients.[8]

Areoles are unique features to cacti. The areole appears like a cushion with a diameter of up to 15 mm, and is formed by two opposing buds in the angles of a leaf[citation needed]. The upper bud develops into either a blossom or a side shoot, while the lower bud develops into spines. The two buds of the areoles can lie very close together or be separated by several cm.

Some cactus flowers form long tubes (up to 30 cm) so only certain species of moths can reach the nectar, and therefore pollinate the blossoms. There are also specializations for species of bats, hummingbirds and bees. The duration of flowering is highly variable. Some flowers, such as those of Selenicereus grandiflorus (Queen of the Night), are only fully open for two hours at night, while other species may flower for a whole week. Most cacti are self-incompatible, and thus require a pollinator. A few are autogamous and are able to pollinate themselves. Fraileas only open their flowers completely in exceptional circumstances; they mostly pollinate themselves or others with their flowers closed ("cleistogamy"). The flower itself has also undergone a further development: the ovary tends to be highly protected by thorns, hairs and scales. Seed formation is prolific, and the fruits are mostly fleshy, pleasant tasting and conspicuously colored. Goats, birds, ants, mice and bats may contribute to seed dispersal.

Among the remains of the Aztec civilization, cactus-like plants can be found in pictorial representations, sculpture and drawings, with many depictions resembling Echinocactus grusonii. Tenochtitlan (the earlier name of Mexico City) means "place of the sacred cactus". The coat of arms of Mexico to this day shows an eagle perched on a cactus while holding a snake, an image which is at the center of the Aztec origin myth.[9] 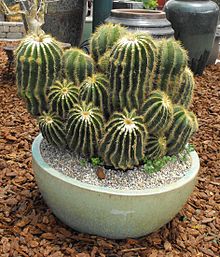 With few exceptions, the vast majority of cacti in habitat almost always are found growing in mineral based soils. Epiphytic cacti are the exception and prefer soils rich in organic materials, however, cacti in this group which prefer these types of soils produce healthier plants when allowed to dry completely between waterings. Some species of cacti such as Toumaya papyracantha (formerly Pediocactus papyracantha -- found in the high mesas of New Mexico) are mycorrhizal symbionts with the roots of various species of grasses[dubious – discuss] and grow underground on the roots of these wild grasses, only emerging above ground and initiating photosynthesis for sexual reproduction and flowering, forming deciduous cactus bodies that die back in winter or during droughts.

The vast majority of commercial "cactus soil mixes" which contain organic materials are unsuitable for growing most terrestrial cacti[citation needed], and many contain pumice, which exudes traces of heavy metals which will rot the roots of cacti if grown in these medium over a period of years[citation needed]. Surprisingly, most cacti prefer a mineral based soil cut with about half sand and allowed to dry out completely between waterings.

Although cacti are adapted to hot deserts and other xerophytic environments, most cacti evolved in mountainous areas[citation needed] and require moderate cold and/or cool night temperatures for some period of the year to initiate regular flowering. Overwatering of cacti is the single biggest cause of plant loss[citation needed]. Cacti are subject to Fusarium infections in their vascular cambium (the bundle of fibers and the "ring" inside the center of a cactus visible when cut in cross section) when overwatered or maintained in soils with high organic content[citation needed]. Fusarium mycelium typically grow into the cambium channels and plug up the plants transport system, causing tissue death and the classic rotting and collapsing observed when you overwater a cactus plant. Cacti are easy to grow if allowed to dry completely between waterings[citation needed]. Many species have specific periods of dormancy and should not be watered during these periods. 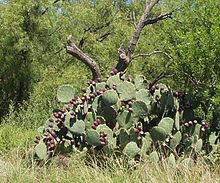 Cacti, cultivated by people worldwide, are a familiar sight as potted plants, houseplants or in ornamental gardens in warmer climates. They often form part of xeriphytic (dry) gardens in arid regions, or raised rockeries. Some countries, such as Australia, have water restrictions in many cities, so drought-resistant plants are increasing in popularity. Numerous species have entered widespread cultivation, including members of Echinopsis, Mammillaria and Cereus among others.

Cacti can be used for fencing material where there is a lack of either natural resources or financial means to construct a permanent fence. This is often seen in arid and warm climates, such as the Maasai Mara in Kenya. This is known as a cactus fence. Cactus fences are often used by homeowners and landscape architects for home security purposes. The sharp thorns of the cactus deter unauthorized persons from entering private properties, and may prevent break-ins if planted under windows and near drainpipes.

Many species of cacti have commercial uses; some cacti bear edible fruit, such as the prickly pear and Hylocereus, which produces dragon fruit or pitaya. The edible cactus, or nopal, industry in Mexico is worth $150 million each year and approximately 10,000 farmers cultivate the plant.[10] Opuntia are also used as host plants for cochineal bugs in the cochineal dye industry in Central America. Particularly in South America dead pillar cacti can yield valuable wood for construction. Some cacti are also of pharmaceutical significance.

The peyote, Lophophora williamsii, is a well-known psychoactive agent used by Native Americans in the southwestern United States. Some species of Echinopsis also have psychoactive properties. For example, the San Pedro cactus, a common specimen found in many garden centers, is known to contain mescaline.

Some species have become endangered in the wild because of overharvesting for sale as an ornamental plant. All cacti are covered by the Convention on International Trade in Endangered Species of Wild Fauna and Flora, and many species, by virtue of their inclusion in Appendix 1, are fully protected.

The word cactus is derived through Latin from the Greek κάκτος kaktos, which referred to the cardoon (Cynara cardunculus). Linnaeus in 1753 applied this name generically to a genus he called Cactus, which was later reassigned as a family, Cactaceae, and subdivided into multiple genera.[11] Cactuses, the Latin plural cacti, the Greek plural cactoi and the uninflected plural cactus are all used in English.[12]

Cactus at the Open Directory Project