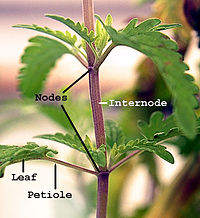 A stem is one of two main structural axes of a vascular plant. The stem is normally divided into nodes and internodes, the nodes hold buds which grow into one or more leaves, inflorescence (flowers), conifer cones, roots, other stems etc. The internodes distance one node from another. The term shoots is often confused with stems; shoots generally refer to new fresh plant growth and does include stems but also to other structures like leaves or flowers. The other main structural axis of plants is the root. In most plants stems are located above the soil surface but some plants have underground stems. A stem develops buds and shoots and usually grows above the ground. Inside the stem, materials move up and down the tissues of the transport system.

Stems have four main functions which are:[1]

Stems are often specialized for storage, asexual reproduction, protection or photosynthesis, including the following: 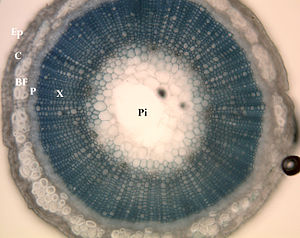 Dicot stem with primary growth have pith in the center, with vascular bundles forming a distinct ring visible when the stem is viewed in cross section. The outside of the stem is covered with an epidermis, which is covered by a waterproof cuticle. The epidermis also may contain stomata for gas exchange and multicellular stem hairs. A cortex consisting of Hypodermis (collenchyma cells) and Endodermis (starch containing cells)is present above the pericycle and vascular bundles.

Woody dicots and many nonwoody dicots have secondary growth originating from their lateral or secondary meristems: the vascular cambium and the cork cambium or phellogen. The vascular cambium forms between the xylem and phloem in the vascular bundles and connects to form a continuous cylinder. The vascular cambium cells divide to produce secondary xylem to the inside and secondary phloem to the outside. As the stem increases in diameter due to production of secondary xylem and secondary phloem, the cortex and epidermis are eventually destroyed. Before the cortex is destroyed, a cork cambium develops there. The cork cambium divides to produce waterproof cork cells externally and sometimes phelloderm cells internally. Those three tissues form the periderm, which replaces the epidermis in function. Areas of loosely packed cells in the periderm that function in gas exchange are called lenticels.

Secondary xylem is commercially important as wood. The seasonal variation in growth from the vascular cambium is what creates yearly tree rings in temperate climates. Tree rings are the basis of dendrochronology, which dates wooden objects and associated artifacts. Dendroclimatology is the use of tree rings as a record of past climates. The aerial stem of an adult tree is called a trunk. The dead, usually darker inner wood of a large diameter trunk is termed the heartwood and is the result of tylosis. The outer, living wood is termed the sapwood. 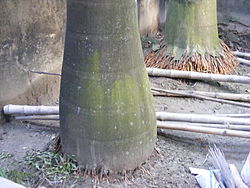 Vascular bundles are present throughout the monocot stem, although concentrated towards the outside. This differs from the dicot stem that has a ring of vascular bundles and often none in the center. The shoot apex in monocot stems is more elongated. Leaf sheathes grow up around it, protecting it. This is true to some extent of almost all monocots. Monocots rarely produce secondary growth and are therefore seldom woody, with Palms and Bamboo being notable exceptions. However, many monocot stems increase in diameter via anomalous secondary growth. 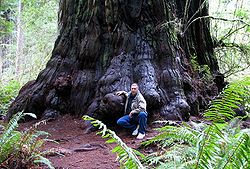 The trunk of this redwood tree is its stem. 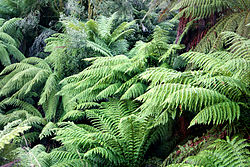 All gymnosperms are woody plants. Their stems are similar in structure to woody dicots except that most gymnosperms produce only tracheids in their xylem, not the vessels found in dicots. Gymnosperm wood also often contains resin ducts. Woody dicots are called hardwoods, e.g. oak, maple and walnut. In contrast, softwoods are gymnosperms, such as pine, spruce and fir.

Most ferns have rhizomes with no vertical stem. The exception is tree ferns, with vertical stems up to about 20 meters. The stem anatomy of ferns is more complicated than that of dicots because fern stems often have one or more leaf gaps in cross section. A leaf gap is where the vascular tissue branches off to a frond. In cross section, the vascular tissue does not form a complete cylinder where a leaf gap occurs. Fern stems may have solenosteles or dictyosteles or variations of them. Many fern stems have phloem tissue on both sides of the xylem in cross-section. .

Foreign chemicals such as air pollutants,[3] herbicides and pesticides can damage stem structures. In the case of herbicides many chemicals act by surficial effects, and other agents cause damage through uptake of the chemical herbicide, which is typically a complex organic chemical. 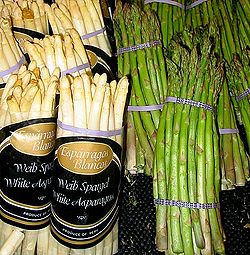 There are thousands of species whose stems have economic uses. Stems provide a few major staple crops such as potato and taro. Sugarcane stems are a major source of sugar. Maple sugar is obtained from trunks of maple trees. Vegetables from stems are asparagus, bamboo shoots, cactus pads or nopalitos, kohlrabi, and water chestnut. The spice, cinnamon is bark from a tree trunk. Cellulose from tree trunks is a food additive in bread, grated Parmesan cheese, and other processed foods.[citation needed] Gum arabic is an important food additive obtained from the trunks of Acacia senegal trees. Chicle, the main ingredient in chewing gum, is obtained from trunks of the chicle tree.

Medicines obtained from stems include quinine from the bark of cinchona trees, camphor distilled from wood of a tree in the same genus that provides cinnamon, and the muscle relaxant curare from the bark of tropical vines.

Amber is fossilized sap from tree trunks; it is used for jewelry and may contain ancient animals. Resins from conifer wood are used to produce turpentine and rosin. Tree bark is often used as a mulch and in growing media for container plants. It also can become the natural habitat of lichens.

Some ornamental plants are grown mainly for their attractive stems, e.g.: