Alternation of generations (also known as alternation of phases or metagenesis) is a term primarily used in describing the life cycle of plants (taken here to mean the Archaeplastida). A multicellular sporophyte, which is diploid with 2N paired chromosomes (i.e. N pairs), alternates with a multicellular gametophyte, which is haploid with N unpaired chromosomes. A mature sporophyte produces spores by meiosis, a process which results in a reduction of the number of chromosomes by a half. Spores germinate and grow into a gametophyte. At maturity, the gametophyte produces gametes by mitosis, which does not alter the number of chromosomes. Two gametes (originating from different organisms of the same species or from the same organism) fuse to produce a zygote, which develops into a diploid sporophyte. This cycle, from sporophyte to sporophyte (or equally from gametophyte to gametophyte), is the way in which all land plants and many algae undergo sexual reproduction.

All animals develop differently. A mature animal is diploid and so is, in one sense, equivalent to a sporophyte. However, an animal directly produces haploid gametes by meiosis. No haploid spores capable of dividing are produced, so neither is a haploid gametophyte. There is no alternation between diploid and haploid forms.

Other organisms, such as fungi, can have life cycles in which different kinds of organism alternate. The term 'alternation of generations' has also been applied to these cases.[citation needed]

The discussion of 'alternation of generations' above treats the alternation of a multicellular diploid form with a multicellular haploid form as the defining characteristic, regardless of whether these forms are free-living or not.[1] In some species, such as the alga Ulva lactuca, the diploid and haploid forms are indeed both free-living independent organisms, essentially identical in appearance. The free-swimming gametes form a zygote which germinates into a diploid sporophyte; the free-swimming spores germinate into a haploid gametophyte.

However, in other species, either the sporophyte or the gametophyte is very much reduced and is incapable of free living. For example, in seed plants, the gametophyte generation develops totally within the sporophyte which protects and nurtures it, with the sole exception of pollen grains, which are the male gametophytes, but which have been reduced to only three cells. Here the notion of two generations is less obvious; as Bateman & Dimichele say "[s]porophyte and gametophyte effectively function as a single organism".[2] The alternative term 'alternation of phases' may then be more appropriate.[3]

Alternation of generations in plants

The diagram below shows the fundamental elements of the alternation of generations in plants. It is vital to have a good understanding of these fundamentals before considering the many variations found in different groups of plants. Starting from the right of the diagram, the processes involved are as follows:[4] 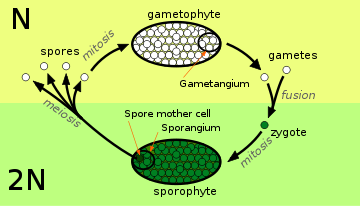 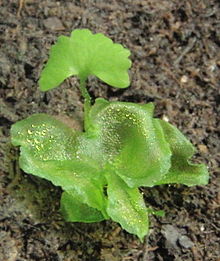 Gametophyte of the fern Onoclea sensibilis (the flat thallus at the bottom of the picture) with a descendant sporophyte beginning to grow from it (the small frond at the top of the picture).

The situation is quite different in all animals, where the fundamental process is that a diploid (2N) individual directly produces haploid (N) gametes by meiosis. Spores (i.e. haploid cells which are able to undergo mitosis) are not produced, so neither is a haploid multi-cellular organism. The single-celled gametes are the only entities which are haploid.

The diagram shown above is a good representation of the life cycle of some multi-cellular algae (e.g. the genus Cladophora) which have sporophytes and gametophytes of very similar, if not identical, appearance, and which do not have different kinds of spores or gametes.[5]

However, there are many possible variations on the fundamental elements of a life cycle which has alternation of generations. Each variation may occur separately or in combination, resulting in a bewildering variety of life cycles. The terms used by botanists in describing these life cycles can be equally bewildering. As Bateman and Dimichele say "[...] the alternation of generations has become a terminological morass; often, one term represents several concepts or one concept is represented by several terms."[6]

There are some correlations between these variations, but they are just that, correlations, and not absolute. For example, in flowering plants, microspores ultimately produce microgametes (sperm) and megaspores ultimately produce megagametes (eggs). However, in ferns and their allies there are groups with undifferentiated spores but differentiated gametophytes. For example, the fern Ceratopteris thalictrioides has spores of only one kind, which vary continuously in size. Smaller spores tend to germinate into gametophytes which produce only sperm-producing antheridia.[14]

The diagram shows the alternation of generations in a species which is heteromorphic, sporophytic, oogametic, dioicous, heterosporic and dioecious. A seed plant example is a willow tree (genus Salix).[15] Starting in the centre of the diagram, the processes involved are:

The term 'plants' is taken here to mean the Archaeplastida, i.e. the glaucophytes, red and green algae and land plants.

Alternation of generations occurs in almost all multicellular red and green algae, both freshwater forms (such as Cladophora) and seaweeds (such as Ulva). In most, the generations are homomorphic (isomorphic) and free-living. Some species of red algae have a complex triphasic alternation of generations, in which there is a gametophyte phase and two distinct sporophyte phases. For further information, see Red algae: Reproduction.

Land plants all have heteromorphic (anisomorphic) alternation of generations, in which the sporophyte and gametophyte are distinctly different. All bryophytes, i.e. liverworts, mosses and hornworts, have the gametophyte generation as the most conspicuous. As an illustration, consider a monoicous moss. Antheridia and archegonia develop on the mature plant (the gametophyte). In the presence of water, the biflagellate sperm from the antheridia swim to the archegonia and fertilisation occurs, leading to the production of a diploid sporophyte. The sporophyte grows up from the archegonium. Its body comprises a long stalk topped by a capsule within which spore-producing cells undergo meiosis to form haploid spores. Most mosses rely on the wind to disperse these spores. For further information, see Liverwort: Life cycle, Moss: Life cycle, Hornwort: Life cycle.

In ferns and their allies, including clubmosses and horsetails, the conspicuous plant observed in the field is the diploid sporophyte. The haploid spores develop in sori on the underside of the fronds and are dispersed by the wind (or in some cases, by floating on water). If conditions are right, a spore will germinate and grow into a rather inconspicuous plant body called a prothallus. The haploid prothallus does not resemble the sporophyte, and as such ferns and their allies have a heteromorphic alternation of generations. The prothallus is short-lived, but carries out sexual reproduction, producing the diploid zygote that then grows out of the prothallus as the sporophyte. For further information, see Fern: Life cycle.

In the spermatophytes, the seed plants, the sporophyte is the dominant multicellular phase; the gametophytes are strongly reduced in size and very different in morphology. The entire gametophyte generation, with the sole exception of pollen grains (microgametophytes), is contained within the sporophyte. The life cycle of a dioecious flowering plant (angiosperm), the willow, has been outlined in some detail in an earlier section (A complex life cycle). The life cycle of a gymnosperm is similar. However, flowering plants have in addition a phenomenon called 'double fertilization'. Two sperm nuclei from a pollen grain (the microgametophyte), rather than a single sperm, enter the archegonium of the megagametophyte; one fuses with the egg nucleus to form the zygote, the other fuses with two other nuclei of the gametophyte to form 'endosperm', which nourishes the developing embryo. For further information, see Double fertilization.

Other groups of organism

Fungal mycelia are typically haploid. When mycelia of different mating types meet, they produce two multinucleate ball-shaped cells, which join via a "mating bridge". Nuclei move from one mycelium into the other, forming a heterokaryon (meaning "different nuclei"). This process is called plasmogamy. Actual fusion to form diploid nuclei is called karyogamy, and may not occur until sporangia are formed. Karogamy produces a diploid zygote, which is a short-lived sporophyte that soon undergoes meiosis to form haploid spores. When the spores germinate, they develop into new mycelia.

The life cycle of slime moulds is very similar to that of fungi. Haploid spores germinate to form swarm cells or myxamoebae. These fuse in a process referred to as plasmogamy and karyogamy to form a diploid zygote. The zygote develops into a plasmodium, and the mature plasmodium produces, depending on the species, one to many fruiting bodies containing haploid spores.

In some animals, there is an alternation between parthenogenic and sexually reproductive phases (heterogamy). Although in some ways similar to alternation of generations, the genetics of heterogamy is significantly different.[citation needed]