Fern
This article is about the group of pteridophyte plants. For other uses, see Fern (disambiguation).

A fern is any one of a group of about 12,000 species of plants belonging to the botanical group known as Pteridophyta.[3] Unlike mosses, they have xylem and phloem (making them vascular plants). They have stems, leaves, and roots like other vascular plants. Ferns reproduce via spores and have neither seeds nor flowers.

By far the largest group of ferns are the leptosporangiate ferns, but ferns as defined here (also called monilophytes) include horsetails, whisk ferns, marattioid ferns, and ophioglossoid ferns. The term pteridophyte also refers to ferns and a few other seedless vascular plants (see classification section below). A pteridologist is a specialist in the study of pteridophytes in a broader sense that includes the more distantly related lycophytes.

Ferns are not of major economic importance, but some are grown or gathered for food, as ornamental plants, for remediating contaminated soils, and have been the subject of research for their ability to remove some chemical pollutants from the air. Some are significant weeds. They also play a role in mythology, medicine, and art. 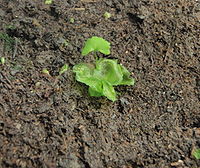 Ferns are vascular plants differing from lycophytes by having true leaves (megaphylls). They differ from seed plants (gymnosperms and angiosperms) in their mode of reproduction—lacking flowers and seeds. Like all other vascular plants, they have a life cycle referred to as alternation of generations, characterized by a diploid sporophytic and a haploid gametophytic phase. The diploid sporophyte has 2n paired chromosomes, where n varies from species to species. The haploid gametophyte has n unpaired chromosomes, i.e. half the number of the sporophyte. Unlike the gymnosperms and angiosperms, the ferns' gametophyte is a free-living organism.

Life cycle of a typical fern:

The stereotypic image of ferns growing in moist shady woodland nooks is far from being a complete picture of the habitats where ferns can be found growing. Fern species live in a wide variety of habitats, from remote mountain elevations, to dry desert rock faces, to bodies of water or in open fields. Ferns in general may be thought of as largely being specialists in marginal habitats, often succeeding in places where various environmental factors limit the success of flowering plants. Some ferns are among the world's most serious weed species, including the bracken fern growing in the Scottish highlands, or the mosquito fern (Azolla) growing in tropical lakes, both species forming large aggressively spreading colonies. There are four particular types of habitats that ferns are found in: moist, shady forests; crevices in rock faces, especially when sheltered from the full sun; acid wetlands including bogs and swamps; and tropical trees, where many species are epiphytes (something like a quarter to a third of all fern species[4]).

Many ferns depend on associations with mycorrhizal fungi. Many ferns only grow within specific pH ranges; for instance, the climbing fern (Lygodium) of eastern North America will only grow in moist, intensely acid soils, while the bulblet bladder fern (Cystopteris bulbifera), with an overlapping range, is only found on limestone.

The spores are rich in lipids, protein and calories, so some vertebrates eat these. The European woodmouse (Apodemus sylvaticus) has been found to eat the spores of Culcita macrocarpa and the bullfinch (Pyrrhula murina) and the New Zealand lesser short-tailed bat (Mystacina tuberculata) also eat fern spores.[5] 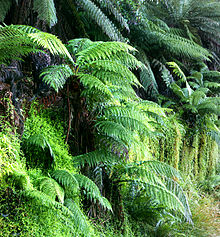 Like the sporophytes of seed plants, those of ferns consist of:

The gametophytes of ferns, however, are very different from those of seed plants. They typically consist of:

One difference between sporophytes and gametophytes might be summed up by the saying that "Nothing eats ferns, but everything eats gametophytes." This is an over-simplification, but it is true that gametophytes are often difficult to find in the field because they are far more likely to be food than are the sporophytes.

One problem with fern classification is the problem of cryptic species. A cryptic species is a species that is morphologically similar to another species, but differs genetically in ways that prevent fertile interbreeding. A good example of this is the currently designated species Asplenium trichomanes, the maidenhair spleenwort. This is actually a species complex that includes distinct diploid and tetraploid races. There are minor but unclear morphological differences between the two groups, which prefer distinctly differing habitats. In many cases such as this, the species complexes have been separated into separate species, thus raising the number of overall fern species. Possibly many more cryptic species are yet to be discovered and designated.

Ferns have traditionally been grouped in the Class Filices, but modern classifications assign them their own phylum or division in the plant kingdom, called Pteridophyta, also known as Filicophyta. The group is also referred to as Polypodiophyta, (or Polypodiopsida when treated as a subdivision of tracheophyta (vascular plants), although Polypodiopsida sometimes refers to only the leptosporangiate ferns). The term "pteridophyte" has traditionally been used to describe all seedless vascular plants, making it synonymous with "ferns and fern allies". This can be confusing since members of the fern phylum Pteridophyta are also sometimes referred to as pteridophytes. The study of ferns and other pteridophytes is called pteridology, and one who studies ferns and other pteridophytes is called a pteridologist.

Traditionally, three discrete groups of plants have been considered ferns: two groups of eusporangiate ferns—families Ophioglossaceae (adders-tongues, moonworts, and grape-ferns) and Marattiaceae—and the leptosporangiate ferns. The Marattiaceae are a primitive group of tropical ferns with a large, fleshy rhizome, and are now thought to be a sibling taxon to the main group of ferns, the leptosporangiate ferns. Several other groups of plants were considered "fern allies": the clubmosses, spikemosses, and quillworts in the Lycopodiophyta, the whisk ferns in Psilotaceae, and the horsetails in the Equisetaceae. More recent genetic studies have shown that the Lycopodiophyta are more distantly related to other vascular plants, having radiated evolutionarily at the base of the vascular plant clade, while both the whisk ferns and horsetails are as much "true" ferns as are the Ophioglossoids and Marattiaceae. In fact, the whisk ferns and Ophioglossoids are demonstrably a clade, and the horsetails and Marattiaceae are arguably another clade. Molecular data—which remain poorly constrained for many parts of the plants' phylogeny — have been supplemented by recent morphological observations supporting the inclusion of Equisetaceae within the ferns, notably relating to the construction of their sperm, and peculiarities of their roots.[2] However, there are still differences of opinion about the placement of the Equisetum species (see Equisetopsida for further discussion). One possible means of treating this situation is to consider only the leptosporangiate ferns as "true" ferns, while considering the other three groups as "fern allies". In practice, numerous classification schemes have been proposed for ferns and fern allies, and there has been little consensus among them.

A 2006 classification by Smith et al. is based on recent molecular systematic studies, in addition to morphological data. Their phylogeny is a consensus of a number of studies, and is shown below (to the level of orders).[2]

Their classification based on this phylogeny divides extant ferns into four classes:

Ferns are not as important economically as seed plants but have considerable importance in some societies. Some ferns are used for food, including the fiddleheads of bracken, Pteridium aquilinum, ostrich fern, Matteuccia struthiopteris, and cinnamon fern, Osmunda cinnamomea. Diplazium esculentum is also used by some tropical peoples as food. Tubers from the King Fern or para (Ptisana salicina) are a traditional food in New Zealand and the South Pacific. Fern tubers were used for food 30,000 years ago in Europe.[7][8] Fern tubers were used by the Guanches to make gofio in the Canary Islands. Licorice fern rhizomes were chewed by the natives of the Pacific Northwest for their flavor.[citation needed]

Ferns of the genus Azolla are very small, floating plants that do not resemble ferns. Called mosquito fern, they are used as a biological fertilizer in the rice paddies of southeast Asia, taking advantage of their ability to fix nitrogen from the air into compounds that can then be used by other plants.[citation needed]

Many ferns are grown in horticulture as landscape plants, for cut foliage and as houseplants, especially the Boston fern (Nephrolepis exaltata) and other members of the genus Nephrolepis. The Bird's Nest Fern (Asplenium nidus) is also popular, as is the staghorn ferns (genus Platycerium). Perennial (also known as hardy) ferns planted in gardens in the northern hemisphere also have a considerable following.[citation needed]

Ferns have been studied and found to be useful in the removal of heavy metals, especially arsenic, from the soil. Other ferns with some economic significance include:[citation needed] 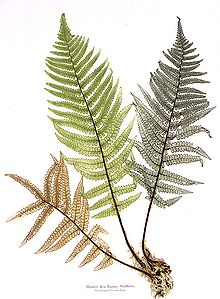 Ferns figure in folklore, for example in legends about mythical flowers or seeds.[9] In Slavic folklore, ferns are believed to bloom once a year, during the Ivan Kupala night. Although alleged to be exceedingly difficult to find, anyone who sees a "fern flower" is thought to be guaranteed to be happy and rich for the rest of their life. Similarly, Finnish tradition holds that one who finds the "seed" of a fern in bloom on Midsummer night will, by possession of it, be guided and be able to travel invisibly to the locations where eternally blazing Will o' the wisps called aarnivalkea mark the spot of hidden treasure. These spots are protected by a spell that prevents anyone but the fern-seed holder from ever knowing their locations.[10]

"Pteridomania"' is a term for the Victorian era craze of fern collecting and fern motifs in decorative art including pottery, glass, metals, textiles, wood, printed paper, and sculpture "appearing on everything from christening presents to gravestones and memorials." The fashion for growing ferns indoors led to the development of the Wardian case, a glazed cabinet that would exclude air pollutants and maintain the necessary humidity.[11]

The dried form of ferns was also used in other arts, being used as a stencil or directly inked for use in a design. The botanical work, The Ferns of Great Britain and Ireland, is a notable example of this type of nature printing. The process, patented by the artist and publisher Henry Bradbury, impressed a specimen on to a soft lead plate. The first publication to demonstrate this was Alois Auer's The Discovery of the Nature Printing-Process.

Several non-fern plants are called "ferns" and are sometimes confused with true ferns. These include:

In addition, the book Where the Red Fern Grows has elicited many questions about the mythical "red fern" named in the book. There is no such known plant, although there has been speculation that the oblique grape-fern, Sceptridium dissectum, could be referred to here, because it is known to appear on disturbed sites and its fronds may redden over the winter.