Devonian
For the Celtic language, see Southwestern Brythonic language; for the residents of the English county, see Devon.

The Devonian is a geologic period and system of the Paleozoic Era spanning from the end of the Silurian Period, about 416.0 ± 2.8 Mya (million years ago), to the beginning of the Carboniferous Period, about 359.2 ± 2.5 Mya (ICS, 2004,[5] chart). It is named after Devon, England, where rocks from this period were first studied.

The Devonian period experienced the first significant adaptive radiation of terrestrial life. The first seed-bearing plants spread across dry land. Since large vertebrate terrestrial herbivores had not yet appeared, they formed extensive forests which covered the continents. The first ray finned and lobe-finned bony fish also appeared. The pectoral and pelvic fins of lobe-finned fish evolved into legs[6] as they started to walk on land as tetrapods around 397 million years ago.[7] They would become the ancestors to early amphibians. Various terrestrial arthropods also became well-established.

In the oceans, primitive sharks became more numerous than in the Silurian and the late Ordovician. The first ammonite mollusks appeared. Trilobites, the mollusc-like brachiopods, as well as great coral reefs were still common. The Late Devonian extinction severely affected marine life.

The period is named after Devon, a county in southwestern England, where Devonian outcrops are common. While the rock beds that define the start and end of the period are well identified, the exact dates are uncertain. According to the International Commission on Stratigraphy (Ogg, 2004), the Devonian extends from the end of the Silurian Period 416.0 ± 2.8 Mya, to the beginning of the Carboniferous Period 359.9 ± 2.5 Mya (in North America, the beginning of the Mississippian subperiod of the Carboniferous) (ICS 2004).

In nineteenth-century texts the Devonian has been called the "Old Red Age", after the red and brown terrestrial deposits known in the United Kingdom as the Old Red Sandstone in which early fossil discoveries were found. Another common term is "Age of the Fishes", referring to the evolution of several major groups of fish that took place during the period. Older literature on the Anglo-Welsh basin divides it into the Downtonian, Dittonian, Breconian and Farlovian stages, the latter three of which are place in the Devonian.[8]

The Devonian has also erroneously been characterized as a "greenhouse age", due to sampling bias: most of the early Devonian-age discoveries came from the strata of western Europe and eastern North America, which at the time straddled the Equator as part of the supercontinent of Euramerica where fossil signatures of widespread reefs indicate tropical climates that were warm and moderately humid but in fact the climate in the Devonian differed greatly between epochs and geographic regions. For example, during the Early Devonian, arid conditions were prevalent through much of the world including Siberia, Australia, North America, and China, but Africa and South America had a warm temperate climate. In the Late Devonian, by contrast, arid conditions were less prevalent across the world and temperate climates were more common.

The Devonian Period is formally broken into Early, Middle, and Late subdivisions. The rocks corresponding to these epochs are referred to as belonging to the Lower, Middle and Upper parts of the Devonian System.

The Early Devonian lasts from 416 ± 2.8 to 397.5 ± 2.5 and begins with the Lochkovian stage, which lasts until the Pragian. This spans from 411.2 ± 2.8 to 407 ± 2.5, and is followed by the Emsian, which lasts until the Middle Devonian begins, 397.5± 2.7 million years ago. The Middle Devonian comprises two subdivisions, the Eifelian giving way to the Givetian 391.8± 2.7 million years ago. During this time the armoured jawless ostracoderm fish were declining in diversity; the jawed fish were thriving and increasing in diversity in both the oceans and freshwater. The shallow, warm, oxygen-depleted waters of Devonian inland lakes, surrounded by primitive plants, provided the environment necessary for certain early fish to develop essential characteristics such as well developed lungs, and the ability to crawl out of the water and onto the land for short periods of time.

Finally, the Late Devonian starts with the Frasnian, 385.3 ± 2.8 to 374.5 ± 2.5, during which the first forests were taking shape on land. The first tetrapods appear in the fossil record in the ensuing Famennian subdivision, the beginning and end of which are marked with extinction events. This lasted until the end of the Devonian, 359.2± 2.5 million years ago.

The Devonian was a relatively warm period, and probably lacked any glaciers.[12] Reconstruction of tropical sea surface temperature from conodont apatite implies an average value of 30 °C (86 °F) in the Early Devonian.[12] CO2 levels dropped steeply throughout the Devonian period as the burial of the newly-evolved forests drew carbon out of the atmosphere into sediments; this may be reflected by a Mid-Devonian cooling of around 5 °C (9 °F).[12] The Late Devonian warmed to levels equivalent to the Early Devonian; while there is no corresponding increase in CO2 concentrations, continental weathering increases (as predicted by warmer temperatures); further, a range of evidence, such as plant distribution, points to Late Devonian warming.[12] The climate would have affected the dominant organisms in reefs; microbes would have been the main reef-forming organisms in warm periods, with corals and stromatoporoid sponges taking the dominant role in cooler times. The warming at the end of the Devonian may even have contributed to the extinction of the stromatoporoids. 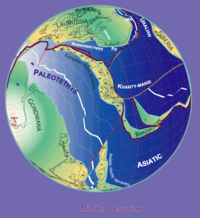 The Paleo-Tethys Ocean opened during the Devonian

The Devonian period was a time of great tectonic activity, as Euramerica and Gondwana drew closer together.

The continent Euramerica (or Laurussia) was created in the early Devonian by the collision of Laurentia and Baltica, which rotated into the natural dry zone along the Tropic of Capricorn, which is formed as much in Paleozoic times as nowadays by the convergence of two great air-masses, the Hadley cell and the Ferrel cell. In these near-deserts, the Old Red Sandstone sedimentary beds formed, made red by the oxidized iron (hematite) characteristic of drought conditions.

Near the equator, the plate of Euramerica and Gondwana were starting to meet, beginning the early stages of assembling Pangaea. This activity further raised the northern Appalachian Mountains and formed the Caledonian Mountains in Great Britain and Scandinavia.

The west coast of Devonian North America, by contrast, was a passive margin with deep silty embayments, river deltas and estuaries, in today's Idaho and Nevada; an approaching volcanic island arc reached the steep slope of the continental shelf in Late Devonian times and began to uplift deep water deposits, a collision that was the prelude to the mountain-building episode of Mississippian times called the Antler orogeny.[13]

Sea levels were high worldwide, and much of the land lay submerged under shallow seas, where tropical reef organisms lived. The deep, enormous Panthalassa (the "universal ocean") covered the rest of the planet. Other minor oceans were Paleo-Tethys, Proto-Tethys, Rheic Ocean, and Ural Ocean (which was closed during the collision with Siberia and Baltica).

Sea levels in the Devonian were generally high. Marine faunas continued to be dominated by bryozoa, diverse and abundant brachiopods, the enigmatic hederelloids, microconchids and corals. Lily-like crinoids were abundant, and trilobites were still fairly common. Among vertebrates, jaw-less armored fish (ostracoderms) declined in diversity, while the jawed fish (gnathostomes) simultaneously increased in both the sea and fresh water. Armored placoderms were numerous during the lower stages of the Devonian Period and became extinct in the Late Devonian, perhaps because of competition for food against the other fish species. Early cartilaginous (Chondrichthyes) and bony fishes (Osteichthyes) also become diverse and played a large role within the Devonian seas. The first abundant genus of shark, Cladoselache, appeared in the oceans during the Devonian Period. The great diversity of fish around at the time, have led to the Devonian being given the name "The Age of Fish" in popular culture.

The first ammonites also appeared during or slightly before the early Devonian Period around 400 Mya.[14]

A now dry barrier reef, located in present day Kimberley Basin of northwest Australia, once extended a thousand kilometers, fringing a Devonian continent. Reefs in general are built by various carbonate-secreting organisms that have the ability to erect wave-resistant frameworks close to sea level. The main contributors of the Devonian reefs were unlike modern reefs, which are constructed mainly by corals and calcareous algae. They were composed of calcareous algae and coral-like stromatoporoids, and tabulate and rugose corals, in that order of importance.[clarification needed]

By the Devonian Period, life was well underway in its colonization of the land. The moss forests and bacterial and algal mats of the Silurian were joined early in the period by primitive rooted plants that created the first stable soils and harbored arthropods like mites, scorpions and myriapods (although arthropods appeared on land much earlier than in the Early Devonian and the existence of fossils such as Climactichnites suggest that land arthropods may have appeared as early as the Cambrian period). Also the first possible fossils of insects appeared around 416 Mya in the Early Devonian. The first tetrapods, evolving from lobe-finned fish, appeared in the coastal water no later than middle Devonian, and gave rise to the first Amphibians.[15]

The greening of land 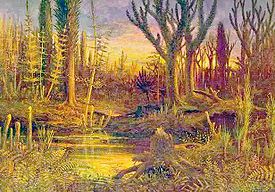 The Devonian period marks the beginning of extensive land colonization by plants. With large herbivorous land-animals not yet being present, large forests could grow and shape the landscape.

Early Devonian plants did not have roots or leaves like the plants most common today and many had no vascular tissue at all. They probably spread largely by vegetative growth, and did not grow much more than a few centimeters tall. By far the greatest land organism was Prototaxites, the fruiting body of an enormous fungus that stood more than 8 meters tall, towering over the low, carpet-like vegetation. By Middle Devonian, shrub-like forests of primitive plants existed: lycophytes, horsetails, ferns, and progymnosperms had evolved. Most of these plants had true roots and leaves, and many were quite tall. The earliest known trees, from the genus Wattieza, appeared in the Late Devonian around 380 Ma.[16] In the Late Devonian, the tree-like ancestral fern Archaeopteris and the giant cladoxylopsid trees grew[17] with true wood. (See also: lignin.) These are the oldest known trees of the world's first forests. By the end of the Devonian, the first seed-forming plants had appeared. This rapid appearance of so many plant groups and growth forms has been called the "Devonian Explosion".

The 'greening' of the continents[citation needed] acted as a carbon dioxide sink, and atmospheric levels of this greenhouse gas may have dropped. This may have cooled the climate and led to a massive extinction event. See Late Devonian extinction.

Animals and the first soils

Primitive arthropods co-evolved with this diversified terrestrial vegetation structure. The evolving co-dependence of insects and seed-plants that characterizes a recognizably modern world had its genesis in the Late Devonian period. The development of soils and plant root systems probably led to changes in the speed and pattern of erosion and sediment deposition. The rapid evolution of a terrestrial ecosystem containing copious animals opened the way for the first vertebrates to seek out a terrestrial living. By the end of the Devonian, arthropods were solidly established on the land. 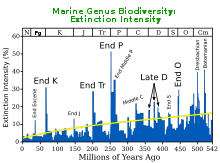 Amongst the severely affected marine groups were the brachiopods, trilobites, ammonites, conodonts, and acritarchs, as well as jawless fish, and all placoderms. Land plants as well as freshwater species, such as our tetrapod ancestors, were relatively unaffected by the Late Devonian extinction event.