The Eocene (symbol EO[1]) Epoch, lasting from about 56 to 34 million years ago (55.8±0.2 to 33.9±0.1 Ma), is a major division of the geologic timescale and the second epoch of the Paleogene Period in the Cenozoic Era. The Eocene spans the time from the end of the Palaeocene Epoch to the beginning of the Oligocene Epoch. The start of the Eocene is marked by the emergence of the first modern mammals. The end is set at a major extinction event called Grande Coupure (the "Great Break" in continuity), which may be related to the impact of one or more large bolides in Siberia and in what is now Chesapeake Bay. As with other geologic periods, the strata that define the start and end of the epoch are well identified,[2] though their exact dates are slightly uncertain.

The name Eocene comes from the Greek ἠώς (eos, dawn) and καινός (kainos, new) and refers to the "dawn" of modern ('new') mammalian fauna that appeared during the epoch.

The Eocene epoch is usually broken into Early and Late, or - more usually - Early, Middle, and Late subdivisions. The corresponding rocks are referred to as Lower, Middle, and Upper Eocene. The Faunal stages from youngest to oldest are:

The Ypresian and occasionally the Lutetian constitute the Early, the Priabonian and sometimes the Bartonian the Late state; alternatively, the Lutetian and Bartonian are united as the Middle Eocene.

Earth's surface temperatures generally rose from the late Palaeocene through the Early Eocene (~59 - 50 Ma), reaching maximum Cenozoic temperatures during the Early Eocene Climatic Optimum (EECO). Superimposed on this warming were a series of "hyperthermals". These are best described as geologically brief (<200 kyr) events characterized by rapid (in geological terms; it was far slower than either the warming predicted for the coming century or even the warming associated with the end of the last ice age) global warming and massive carbon input to the ocean and atmosphere. The most prominent of these events was the Palaeocene-Eocene Thermal Maximum or Initial Eocene Thermal Maximum (PETM or IETM), which began at the Palaeocene-Eocene Boundary. During this episode. Earth surface temperatures rose by 5-7 °C.[3] The PETM coincided with a major mammalian turnover on land (that distinguishes Eocene fauna from Palaeocene fauna), and an extinction of many benthic foraminifera species in the deep sea. Less extreme but nonetheless pronounced hyperthermals followed the PETM, including Eocene Thermal Maximum 2 at ca. 53.7 Ma. Another hot interval occurred ~40 Ma, during the Middle Eocene Climatic Optimum (MECO) when deep sea temperatures rose about 4 °C. Coincident with MECO was a peak in atmospheric carbon dioxide levels and the formation of the Himalayas.[4]

The Eocene global climate was perhaps the most homogeneous of the Cenozoic; the temperature gradient from equator to pole was only half that of today's, and deep ocean currents were exceptionally warm.[5] The polar regions were much warmer than today, perhaps as mild as the modern-day Pacific Northwest; temperate forests extended right to the poles, while rainy tropical climates extended as far north as 45°. The difference was greatest in the temperate latitudes; the climate in the tropics however, was probably similar to today's.[6] The recent discovery of a giant snake (estimated length 13 m) in Colombia that may have lived during the Eocene suggests, on the contrary, that the tropics were much warmer than today,[7][8] a conclusion in accord with numerical simulations of the climate during the Eocene.[9]

Although the global climate remained comparatively warm throughout the rest of the Eocene it was this epoch that marked the start of a slow global cooling trend, possibly triggered by the Arctic Ocean Azolla event and the formation of the Antarctic circumpolar current following the final break up of Gondwana. This trend would eventually lead to the Pleistocene glaciations.

A global palaeogeographic reconstruction of the Earth during the Eocene, some 50 million years ago.

During the Eocene, the continents continued to drift toward their present positions.

At the beginning of the period, Australia and Antarctica remained connected, and warm equatorial currents mixed with colder Antarctic waters, distributing the heat around the planet and keeping global temperatures high. But when Australia split from the southern continent around 45 Ma, the warm equatorial currents were deflected away from Antarctica, and an isolated cold water channel developed between the two continents. The Antarctic region cooled down, and the ocean surrounding Antarctica began to freeze, sending cold water and icefloes north, reinforcing the cooling.

The northern supercontinent of Laurasia began to break up, as Europe, Greenland and North America drifted apart.

In western North America, mountain building started in the Eocene, and huge lakes formed in the high flat basins among uplifts, resulting in the deposition of the Green River Formation lagerstätte.

In Europe, the Tethys Sea finally vanished, while the uplift of the Alps isolated its final remnant, the Mediterranean, and created another shallow sea with island archipelagos to the north. Though the North Atlantic was opening, a land connection appears to have remained between North America and Europe since the faunas of the two regions are very similar.

India continued its journey away from Africa and began its collision with Asia, folding the Himalayas into existence.

It is hypothesized that the Eocene hothouse world was caused by runaway global warming from released methane clathrates deep in the oceans. The clathrates were buried beneath mud that was disturbed as the oceans warmed. Methane (CH4) has ten to twenty times the greenhouse gas effect of carbon dioxide (CO2).

At the beginning of the Eocene, the high temperatures and warm oceans created a moist, balmy environment, with forests spreading throughout the Earth from pole to pole. Apart from the driest deserts, Earth must have been entirely covered in forests.

Polar forests were quite extensive. Fossils and even preserved remains of trees such as swamp cypress and dawn redwood from the Eocene have been found on Ellesmere Island in the Arctic. The preserved remains are not fossils, but actual pieces preserved in oxygen-poor water in the swampy forests of the time and then buried before they had the chance to decompose. Even at that time, Ellesmere Island was only a few degrees in latitude further south than it is today. Fossils of subtropical and even tropical trees and plants from the Eocene have also been found in Greenland and Alaska. Tropical rainforests grew as far north as northern North America and Europe.

Palm trees were growing as far north as Alaska and northern Europe during the early Eocene, although they became less abundant as the climate cooled. Dawn redwoods were far more extensive as well.

Cooling began mid-period, and by the end of the Eocene continental interiors had begun to dry out, with forests thinning out considerably in some areas. The newly-evolved grasses were still confined to river banks and lake shores, and had not yet expanded into plains and savannas.

The cooling also brought seasonal changes. Deciduous trees, better able to cope with large temperature changes, began to overtake evergreen tropical species. By the end of the period, deciduous forests covered large parts of the northern continents, including North America, Eurasia and the Arctic, and rainforests held on only in equatorial South America, Africa, India and Australia.

Antarctica, which began the Eocene fringed with a warm temperate to sub-tropical rainforest, became much colder as the period progressed; the heat-loving tropical flora was wiped out, and by the beginning of the Oligocene, the continent hosted deciduous forests and vast stretches of tundra. 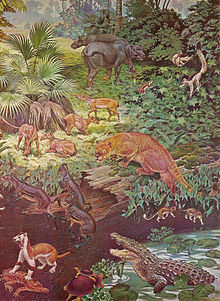 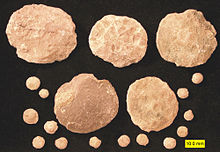 The oldest known fossils of most of the modern mammal orders appear within a brief period during the early Eocene. At the beginning of the Eocene, several new mammal groups arrived in North America. These modern mammals, like artiodactyls, perissodactyls and primates, had features like long, thin legs, feet and hands capable of grasping, as well as differentiated teeth adapted for chewing. Dwarf forms reigned. All the members of the new mammal orders were small, under 10 kg; based on comparisons of tooth size, Eocene mammals were only 60% of the size of the primitive Palaeocene mammals that preceded them. They were also smaller than the mammals that followed them. It is assumed that the hot Eocene temperatures favored smaller animals that were better able to manage the heat.

Both groups of modern ungulates (hoofed animals) became prevalent because of a major radiation between Europe and North America, along with carnivorous ungulates like Mesonyx. Early forms of many other modern mammalian orders appeared, including bats, proboscidians (elephants), primates, rodents and marsupials. Older primitive forms of mammals declined in variety and importance. Important Eocene land fauna fossil remains have been found in western North America, Europe, Patagonia, Egypt and southeast Asia. Marine fauna are best known from South Asia and the southeast United States.

Reptile fossils from this time, such as fossils of pythons and turtles, are abundant. The remains of a giant snake of the length of a school bus has recently been discovered;[8] such a massive snake would have not survived were the tropics as warm as today, contradicting previous conclusions drawn from other proxies for temperature.[citation needed]

During the Eocene, plants and marine faunas became quite modern. Many modern bird orders first appeared in the Eocene.

Several rich fossil insect faunas are known from the Eocene, notably the Baltic amber found mainly along the south coast of the Baltic Sea, amber from the Paris Basin, France and the Bembridge Marls from the Isle of Wight, England. Insects found in Eocene deposits are mostly assignable to modern genera, though frequently these genera do not occur in the area at present. For instance the bibionid genus Plecia is common in fossil faunas from presently temperate areas, but only lives in the tropics and subtropics today.

The Eocene oceans were warm and teeming with fish and other sea life. The first Carcharinid sharks appeared, as did early marine mammals, including Basilosaurus, an early species of whale that is thought to be descended from land animals that existed earlier in the Eocene, the hoofed predators called mesonychids, of which Mesonyx was a member. The first sirenians, relatives of the elephants, also appeared at this time.