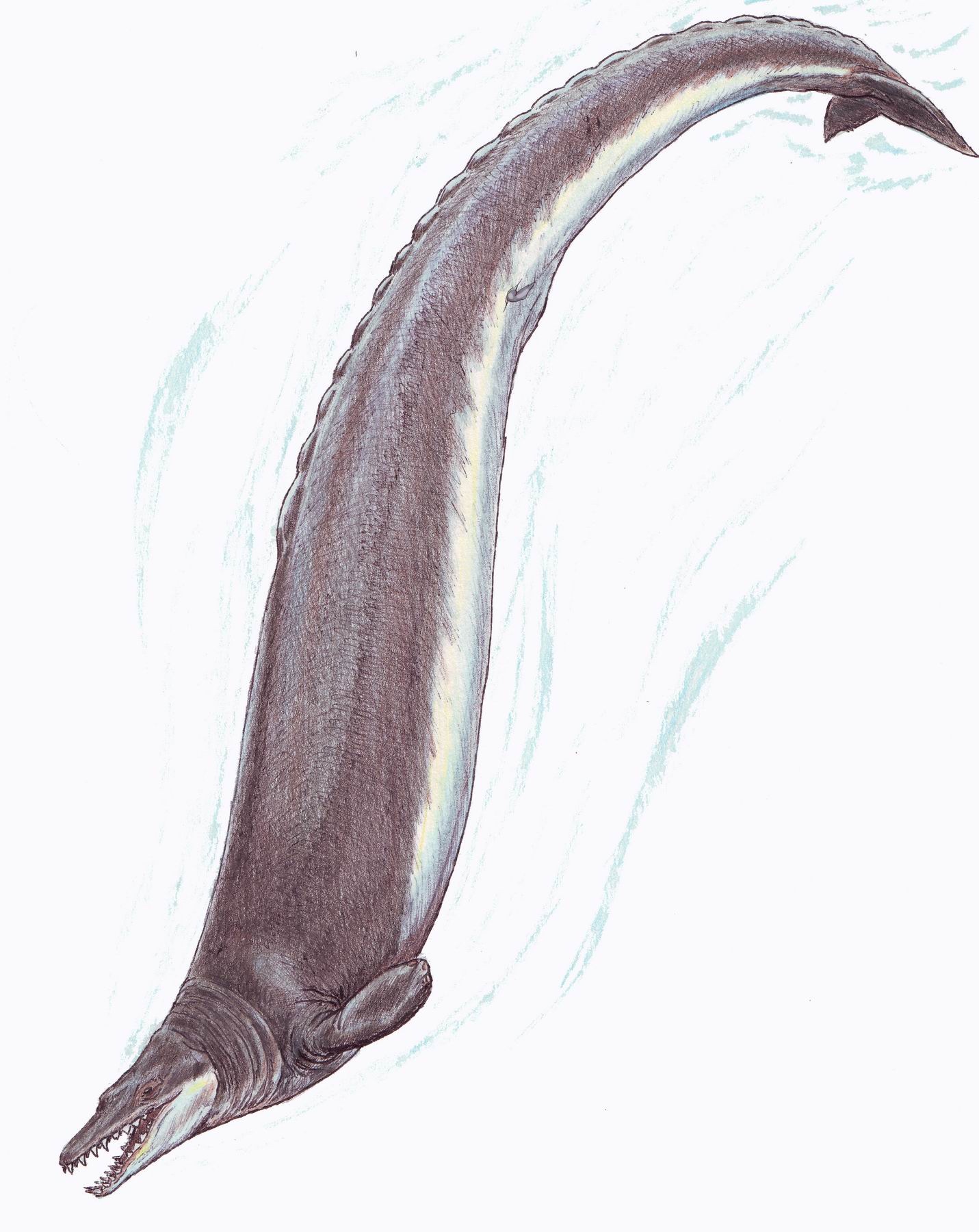 "Basilosaurus" ("King Lizard") is a of that lived from 40 to 34 million years ago in the . Its ized remains were first discovered in the southern (), and were initially believed to be some sort of reptilian , hence the suffix -"saurus". Fossils from at least two other of this have been found in and . "Basilosaurus" averaged about 18 meters (60 ft) in length, and is believed to have been the largest animal to have lived in its time. [ [http://www.kenozoicum.nl/website%20mega%20predators/basilosaurus.html Basilosaurus ] ] It displayed an unparalleled degree of elongation compared with modern whales. Their very small vestigial hind limbs have also been a matter of interest for s. The species is the of and .

During the early 19th century in Louisiana and , "Basilosaurus cetoides" fossils were so common (as well as large) that they were regularly used as furniture. One vertebra was sent in to the by a Judge Bry, who was concerned that the unique finds were being destroyed by the locals. The fossils ended up in the hands of the anatomist Dr. , who proclaimed it to be reptilian (and 45 m [150 ft] long) and gave it the name "Basilosaurus", the name meaning “King reptile”. When the British anatomist Sir studied the spine, mandibular fragments, arms, and ribs (recently found) he proclaimed them to be mammalian. Owen proposed renaming the find to "Zeuglodon cetoides" (“whale-like teeth”), which is now a junior synonym; though the latter is considered by many to be a more fitting name, the first-published name always takes precedent. "Zeuglodon" name is in reference to the double rooted teeth typical of marine mammals.

In 1845, “Dr.” Albert Koch heard stories of giant bones in Alabama, and went down to cobble together a full skeleton. He eventually created a huge convert|114|ft|m|sing=on skeleton of a “”, which he displayed in New York City, and later Europe. It was eventually shown to come from 5 different individuals, some of which were not "Basilosaurus". The remains were eventually destroyed in the .

Fossil finds of another species, "Basilosaurus isis", have been found in the aptly named Zeuglodon valley in Egypt. The fossils were very well preserved, hind limbs included, and were rather numerous. Paleontologist Phillip Gingerich, who organized several expeditions to the valley, speculated that Egyptian crocodile worship may have been inspired by the huge skeletons that lay there. Fossil remains of another species, "Basilosaurus drazindai", have been found in Pakistan. Another fossilized species named "Basiloterus husseini" was its closest known relative, but was not as large or elongated.

The most notable physical feature of "Basilosaurus" is the great deal of elongation it possessed. It accomplished this through an unparalleled elongation of its , and has been described as being the closest a whale ever came to a . It is also believed to have had unusual locomotion, compared with all other cetaceans; similarly sized thoracic, lumbar, sacral and caudal vertebrae imply that "Basilosaurus" moved in an anguilliform (-like) fashion, only vertically. Even more oddly, theorized that it may also have moved in a horizontal anguilliform fashion to some degree, something completely unknown in modern cetaceans. The of the suggests that a small fluke was probably present, which would have only aided vertical motion. Most reconstructions show a small, speculative dorsal fin similar to a rorqual whale’s, but other reconstructions show a dorsal ridge. The most famous part of the whale's anatomy are the 0.6 meter (2 ft) hind limbs, which clearly cannot aid locomotion on a 15-25 meter (50-85 foot) animal. Analysis has shown that the reduced limbs could only snap between two positions. They appear similar to the reduced used as copulatory guides on boas, and might have been used in the same manner. The vertebrae of the whale appear to have been hollow, and it is likely that they were fluid filled as well. This would imply that "Basilosaurus" typically only functioned in two dimensions at the sea's surface, compared with the three dimensional habit of most other cetaceans. Judging from the relatively weak axial musculature and the thick in the , "Basilosaurus" is not believed to have been capable of sustained swimming or deep diving. It is also believed that the primitive whale were incapable of .

The head of "Basilosaurus" did not have room for a melon organ like modern day toothed whales, and the brain was smaller in comparison as well. It is believed that they did not have the social capabilities of modern whales, possibly as a result of that.

At one point of time it was believed that "Basilosaurus" had some sort of plating, but it was likely the misidentification of . Some s believe that either "Basilosaurus" or an evolved relative is currently alive and responsible for sightings, but its record appears to end 37 million years ago, so there is no evidence to support that claim.

"Basilosaurus" was featured in the second episode of BBC's "". It featured the breeding cycle of "Basilosaurus". First, the featured "Basilosaurus" mated, after which food ran out in her territory, and she journeyed into a saltwater lagoon. In one instance, she was unsuccessful in hunting a "". In the end, the "Basilosaurus" dines on baby "" and is shown with her offspring one year later.In a follow up to "Walking with Beasts" called "", the "Basilosaurus" is the top hazard in the episode “Fourth Most Dangerous Sea of All Time.” It was shown as being more aggressive and territorial than in "Beasts".

mentions "Basilosaurus" by name in chapter 104 of "", which is titled “The Fossil Whale.”

In 's "Aestival Tide", a secondary character is a three hundred year old genetically reconstructed and cerebrally augmented basilosaur by the name of Zalophus.