The Pythonidae, commonly known simply as pythons, from the Greek word python-πυθων, are a family of non-venomous snakes found in Africa, Asia and Australia. Among its members are some of the largest snakes in the world. Eight genera and 26 species are currently recognized.[2]

Found in subsaharan Africa, India, Myanmar, southern China, Southeast Asia and from the Philippines southeast through Indonesia to New Guinea and Australia.[1]

In the United States an introduced population of Burmese pythons, Python molurus bivittatus, has existed as an invasive species in the Everglades National Park since the late 1990s.[3]

Many species have been hunted aggressively, which has decimated some, such as the Indian python, Python molurus. 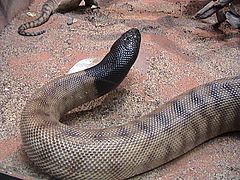 Most members of this family are ambush predators, in that they typically remain motionless in a camouflaged position and then strike suddenly at passing prey. They will generally not attack humans unless startled or provoked, although females protecting their eggs can be aggressive. Reports of attacks on human beings were once more common in South and Southeast Asia, but are now quite rare.

Prey is killed by a process known as constriction; after an animal has been grasped to restrain it, a number of coils are hastily wrapped around it. Then, by applying and maintaining sufficient pressure to prevent it from inhaling, the prey eventually succumbs due to asphyxiation. It has recently been suggested that the pressures produced during constriction cause cardiac arrest by interfering with blood flow,[4] but this hypothesis has not yet been confirmed.

Larger specimens usually eat animals about the size of a house cat, but larger food items are known: some large Asian species have been known to take down adult deer, and the African rock python, Python sebae, has been known to eat antelope. Prey is swallowed whole, and may take anywhere from several days or even weeks to fully digest.

Contrary to popular belief, even the larger species, such as the reticulated python, P. reticulatus, do not crush their prey to death; in fact, prey is not even noticeably deformed before it is swallowed. The speed with which the coils are applied is impressive and the force they exert may be significant, but death is caused by suffocation, with the victim not being able to move its ribs to breathe while it is being constricted.[5][6][7]

Females lay eggs (oviparous). This sets them apart from the family Boidae (boas), most of which bear live young (ovoviviparous). After they lay their eggs, females will typically incubate them until they hatch. This is achieved by causing the muscles to "shiver", which raises the temperature of the body to a certain degree, and thus that of the eggs. Keeping the eggs at a constant temperature is essential for healthy embryo development. During the incubation period, females will not eat and only leave to bask to raise their body temperature.

Most species in this family are available in the exotic pet trade. However, caution must be exercised with the larger species as they can be dangerous; cases of large specimens killing their owners have been documented.[8]

*) Not including the nominate subspecies.
T) Type genus.[1]

Pythons are more closely related to boas than to any other snake-family. Boulenger (1890) considered this group to be a subfamily (Pythoninae) of the family Boidae (boas).[1]