Constriction is a method used by various snake species to kill their prey. Although some species of venomous and mildly-venomous snakes do use constriction to subdue their prey, most snakes which use constriction lack venom.[1] The snake initially strikes at its prey and holds on, pulling the prey into its coils or, in the case of very large prey, pulling itself onto the prey. The snake will then wrap one or two coils around the prey. 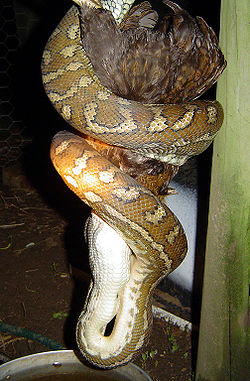 Contrary to myth, the snake does not crush the prey, or even break its bones. Traditionally, it has been thought that snakes hold tightly enough to prevent the prey from drawing air into its lungs, resulting in death from asphyxia. However, some prey items seem to die faster than would be possible through asphyxia, so it has also been suggested that the pressure of constriction causes a rise in the pressure in the prey's body cavity greater than the heart can counter, resulting in immediate cardiac arrest.[2] This new hypothesis has yet to be confirmed, but data indicates that snakes can exert enough pressure for this mechanism to be plausible.[3] Research into this topic is ongoing. It has been found that the green anaconda (Eunectes murinus) has a constriction strength of 6 kg/cm2, which effectively means a total strength of 4000 kg.[4]

Certain groups of snakes have characteristic patterns of constriction, including the number of coils they use and the orientation of the coils.[5]

Constriction can also refer to the act of binding a victim with rope, either as a method of torture or sexual bondage.