Ocean current
This article is about ocean currents. For other uses, see Current (disambiguation).

Distinctive white lines trace the flow of surface currents around the world.

An ocean current is a continuous, directed movement of ocean water generated by the forces acting upon this mean flow, such as breaking waves, wind, Coriolis effect, cabbeling, temperature and salinity differences and tides caused by the gravitational pull of the Moon and the Sun. Depth contours, shoreline configurations and interaction with other currents influence a current's direction and strength.

Ocean currents can flow for great distances, and together they create the great flow of the global conveyor belt which plays a dominant part in determining the climate of many of the Earth’s regions. Perhaps the most striking example is the Gulf Stream, which makes northwest Europe much more temperate than any other region at the same latitude. Another example is the Hawaiian Islands, where the climate is cooler (sub-tropical) than the tropical latitudes in which they are located, due to the effect of the California Current. 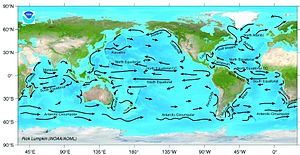 Surface ocean currents are generally wind-driven and develop their typical clockwise spirals in the northern hemisphere and counter-clockwise rotation in the southern hemisphere because of the imposed wind stresses. In wind-driven currents, the Ekman spiral effect results in the currents flowing at an angle to the driving winds. The areas of surface ocean currents move somewhat with the seasons; this is most notable in equatorial currents.

Deep ocean currents are driven by density and temperature gradients. Thermohaline circulation, also known as the ocean's conveyor belt, refers to the deep ocean density-driven ocean basin currents. These currents, which flow under the surface of the ocean and are thus hidden from immediate detection, are called submarine rivers. These are currently being researched using a fleet of underwater robots called Argo. Upwelling and downwelling areas in the oceans are areas where significant vertical movement of ocean water is observed.

Surface currents make up about 10% of all the water in the ocean. Surface currents are generally restricted to the upper 400 m (1,300 ft) of the ocean. The movement of deep water in the ocean basins is by density driven forces and gravity. The density difference is a function of different temperatures and salinity. Deep waters sink into the deep ocean basins at high latitudes where the temperatures are cold enough to cause the density to increase.

Knowledge of surface ocean currents is essential in reducing costs of shipping, since they reduce fuel costs. In the sail-ship era knowledge was even more essential. A good example of this is the Agulhas current, which long prevented Portuguese sailors from reaching India. Even today, the round-the-world sailing competitors employ surface currents to their benefit. Ocean currents are also very important in the dispersal of many life forms. An example is the life-cycle of the European Eel.

Ocean currents are important in the study of marine debris, and vice versa. These currents also affect temperatures throughout the world. For example, the current that brings warm water up the north Atlantic to northwest Europe stops ice from forming by the shores, which would block ships from entering and exiting ports.

The OSCAR near-realtime global ocean circulation data set is based on NOAA and NASA satellite data (sea level altimetry, surface vector winds, and SST). The data set extends from 1993-present and is available at 1-degree and 1/3-degree resolution. The OSCAR data are continuously updated on an interactive website from which users can create customized graphics and download the data. A Validation section of the website provides validation studies in the form of graphics comparing OSCAR data with Moored buoys and global drifters.

OSCAR data are used extensively in climate studies. Monthly maps and anomalies have been published in the monthly Climate Diagnostic Bulletin since 2001, and are used routinely to monitor ENSO and to test prediction models. OSCAR currents are routinely used to evaluate the surface currents in Global Circulation Models (GCMs), for example in NCEP Global Ocean Data Assimilation System (GODAS) and European Centre for Medium-Range Weather Forecasts (ECMWF). Data and relevant publications and references are available on the OSCAR website.