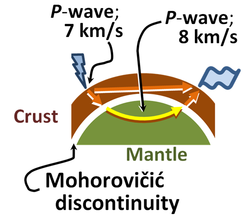 Two paths of a P-wave, one direct and one refracted as it crosses the Moho.[1] 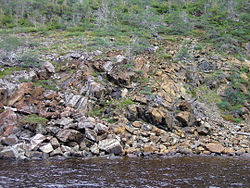 Ordovician ophiolite in Gros Morne National Park, Newfoundland. This rock which formed the Ordovician Moho is exposed on the surface.

The Mohorovičić discontinuity (Croatian pronunciation: [mɔhɔˈrɔvitʃitɕ]) (MOE-HOE-ROE-vee-cheech), usually referred to as the Moho, is the boundary between the Earth's crust and the mantle. Named after the pioneering Croatian seismologist Andrija Mohorovičić, the Moho separates both the oceanic crust and continental crust from underlying mantle. The Moho mostly lies entirely within the lithosphere; only beneath mid-ocean ridges does it define the lithosphere – asthenosphere boundary. The Mohorovičić discontinuity was first identified in 1909 by Mohorovičić, when he observed that seismograms from shallow-focus earthquakes had two sets of P-waves and S-waves, one that followed a direct path near the Earth's surface and the other refracted by a high velocity medium.[1]

Nature of the Moho

Immediately above the Moho the velocities of primary seismic waves (P-waves) are approximately those of basalt (6.7 – 7.2 km/s), and below they are that of peridotitic or dunitic Earth-materials (7.6 – 8.6 km/s).[3] That suggests the Moho marks a change of composition, but the interface appears to be too even for any believable sorting mechanism within the Earth. Near-surface observations suggest such sorting produces an irregular surface. Some history of suggestions that the boundary marks instead a phase change controlled by a temperature gradient in the Earth can be found in Howell.[4]

During the late 1950s and early 1960s, a proposal was taken up in the executive committee of the National Science Foundation to drill a hole through the ocean floor to reach this boundary. However the operation, named Project Mohole, never received sufficient support and was mismanaged; it was canceled by the United States Congress in 1967. Simultaneous efforts were made by the Soviet Union at the Kola Institute, which reached a depth of 12,260 metres (40,220 ft) over 15 years, the world's deepest hole until 2011, before that attempt was also abandoned in 1989.[5]