Any water in a sea or lake that is not close to the bottom or near to the shore can be said to be in the pelagic zone. The word pelagic comes from the Greek πέλαγος or pélagos, which means "open sea". The pelagic zone can be thought of in terms of an imaginary cylinder or water column that goes from the surface of the sea almost to the bottom. Conditions change deeper down the water column; the pressure increases, the temperature drops and there is less light. Depending on the depth, the water column, rather like the Earth's atmosphere can be divided into different layers.

The pelagic zone occupies 1,330 million cubic kilometres (320 million cubic miles) with a mean depth of 3.68 kilometres (2.29 mi) and maximum depth of 11 kilometres (6.8 mi).[1][2][3] Fish that live in the pelagic zone are called pelagic fish. Pelagic life decreases with increasing depth. It is affected by light intensity, pressure, temperature, salinity, the supply of dissolved oxygen and nutrients, and the submarine topography. In deep water, the pelagic zone is sometimes called the open-ocean zone and can be contrasted with water that is near the coast or on the continental shelf. However in other contexts, coastal water that is not near the bottom is still said to be in the pelagic zone.

The pelagic zone can be contrasted with the benthic and demersal zones at the bottom of the sea. The benthic zone is the ecological region at the very bottom of the sea. It includes the sediment surface and some sub-surface layers. Marine organisms living in this zone, such as clams and crabs, are called benthos. The demersal zone is just above the benthic zone. It can be significantly affected by the seabed and the life that lives there. Fish that live in the demersal zone are called demersal fish. Demersal fish can be divided into benthic fish, which are denser than water so they can rest on the bottom, and benthopelagic fish, which swim in the water column just above the bottom. Demersal fish are also known as bottom feeders and groundfish.

A scale diagram of the layers of the pelagic zone.

Depending on how deep the sea is, there can be up to five horizontal layers in the ocean. From the top down, they are:

This is the illuminated zone at the surface of the sea where there is enough light for photosynthesis. Nearly all primary production in the ocean occurs here. Consequently, plants and animals are largely concentrated in this zone.

Examples of organisms living in this zone are plankton, floating seaweed, jellyfish, tuna, many sharks, and dolphins.

The name for this zone stems from Greek μέσον, middle.

Although some light penetrates this second layer, it is insufficient for photosynthesis. At about 500 m the water also becomes depleted of oxygen. Still, life copes, with gills that are more efficient or by minimizing movement.

Examples of animals that live here are: swordfish, squid, wolffish and some species of cuttlefish. Many organisms that live in this zone are bioluminescent.[4] Some creatures living in the mesopelagic zone will rise to the epipelagic zone at night in order to feed.[4]

The name stems from the Greek βαθύς (bathýs), meaning deep.

At this depth the ocean is pitch black, apart from occasional bioluminescent organisms, such as lanternfish. There is no living plant life.

Most animals living here survive by consuming the detritus falling from the zones above, which is known as "marine snow", or, like the marine hatchetfish, by preying on other inhabitants of this zone.

Other examples of this zone's inhabitants are giant squid, smaller squids and the dumbo octopus. The giant squid is hunted here by deep-diving sperm whales.

The name is derived from the Greek ἄβυσσος (ábyssos), abyss, meaning bottomless (a holdover from the times when the deep ocean was believed to be bottomless). Very few creatures are sufficiently adapted to survive in the cold temperatures and incredible pressures found at this depth.[4] Among the species found in this zone are several species of squid; echinoderms including the basket star, swimming cucumber, and the sea pig; and marine arthropods including the sea spider.[4] Many of the species living at these depths have adapted to be transparent and eyeless as a result of the total lack of light in this zone.[4]

The deep water in ocean trenches.

The name is derived from the Greek Ἁδης (Haidēs), Hades, the classical Greek underworld. This zone is mostly unknown, and very few species are known to live here (in the open areas). However, many organisms live in hydrothermal vents in this and other zones. Some define the hadopelagic as waters below 6,000 m (19,685 ft), whether in a trench or not.

The bathypelagic, abyssopelagic, and hadopelagic zones are very similar in character, and some marine biologists combine them into a single zone or consider the latter two to be the same. The abyssal plain is covered with soft sludge composed of dead organisms from above. 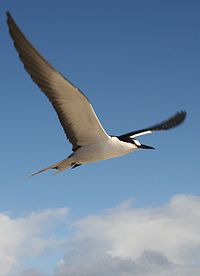 The pelagic sooty tern spends months at a time flying at sea, returning to land only for breeding.[5]

The pelagic ecosystem is based on the phytoplankton which occupy the start of the foodchain. Phytoplankton manufacture their own food using a process of photosynthesis. Because they need sunlight, they inhabit the upper, sunlit epipelagic zone, which includes the coastal or neritic zone. Biodiversity diminishes markedly in the deeper zones below the epipelagic zone as dissolved oxygen diminishes, water pressure increases, temperatures become colder, food sources become scarce, and light diminishes and finally disappears.[6]

Pelagic birds, also called oceanic birds, are birds that live on the open sea, rather than around waters adjacent to land or around inland waters. Pelagic birds feed on planktonic crustaceans, squid and forage fish. Examples are the Atlantic puffin, macaroni penguins, sooty terns, shearwaters, and procellariiforms such as the albatross, procellariids and petrels.

The term seabird includes birds which live around the sea adjacent to land, as well as pelagic birds.

Pelagic fish are fish that live in the water column of coastal, ocean and lake waters, but not on or near the bottom of the sea or the lake. They can be contrasted with demersal fish, which live on or near the bottom, and reef fish which are associated with coral reefs.[7]