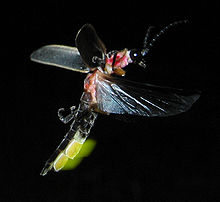 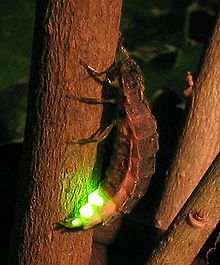 Bioluminescence is the production and emission of light by a living organism. Its name is a hybrid word, originating from the Greek bios for "living" and the Latin lumen "light". Bioluminescence is a naturally occurring form of chemiluminescence where energy is released by a chemical reaction in the form of light emission. Fireflies, anglerfish, and other creatures produce the chemicals luciferin (a pigment) and luciferase (an enzyme).[1] The luciferin reacts with oxygen to create light. The luciferase acts as a catalyst to speed up the reaction, which is sometimes mediated by cofactors such as calcium ions or ATP. The chemical reaction can occur either inside or outside the cell. In bacteria, the expression of genes related to bioluminescence is controlled by an operon called the Lux operon.[2]

Bioluminescence occurs in marine vertebrates and invertebrates, as well as microorganisms and terrestrial animals. Symbiotic organisms carried within larger organisms are also known to bioluminesce.

Bioluminescence is a form of luminescence, or "cold light" emission; less than 20% of the light generates thermal radiation. It should not be confused with fluorescence, phosphorescence or refraction of light.

Ninety percent of deep-sea marine life are estimated to produce bioluminescence in one form or another. Most marine light-emission belongs in the blue and green light spectrum, the wavelengths that can transmit through the seawater most easily. However, certain loose-jawed fishes emit red and infrared light and the genus Tomopteris emits yellow bioluminescence.

Non-marine bioluminescence is less widely distributed, but a larger variety in colours is seen. The two best-known forms of land bioluminescence are fireflies and glow worms. Other insects, insect larvae, annelids, arachnids and even species of fungi have been noted to possess bioluminescent abilities.

Some forms of bioluminescence are brighter (or only exist) at night, following a circadian rhythm.

There are five main theories for bioluminescent traits:

In some squid species bacterial bioluminescence is used for counterillumination so the animal matches the overhead environmental light seen from below.[3] In these animals, photoreceptive vesicles have been found that control the contrast of this illumination to create optimal matching.[3] Usually these light organs are separate from the tissue containing the bioluminescent bacteria. However, in one species Euprymna scolopes these bacteria make up an integral component of the animal's light organ.[4] 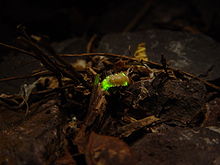 Bioluminescence is used as a lure to attract prey by several deep sea fish such as the anglerfish. A dangling appendage that extends from the head of the fish attracts small animals to within striking distance of the fish. Some fish, however, use a non-bioluminescent lure.

The cookiecutter shark uses bioluminescence for camouflage, but a small patch on its underbelly remains dark and appears as a small fish to large predatory fish like tuna and mackerel swimming beneath it. When these fish try to consume the "small fish", they are bitten by the shark, which gouges out small circular "cookie cutter" shaped chunks of flesh from its hosts.

The attraction of mates is another proposed mechanism of bioluminescent action. This is seen actively in fireflies, which use periodic flashing in their abdomens to attract mates in the mating season. In the marine environment this has only been well documented in certain small crustaceans called ostracod. It has been suggested that pheromones may be used for long-distance communication, and bioluminescence used at close range to "home in" on the target. 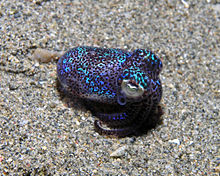 A bobtail squid, one of many bioluminescent squid – 63 out of 100 genera of cuttlefish and squid contain species with the ability.[5]

Certain squid and small crustaceans use bioluminescent chemical mixtures or bioluminescent bacterial slurries in the same way as many squid use ink. A cloud of luminescence is expelled, confusing or repelling a potential predator while the squid or crustacean escapes to safety. Every species of firefly has larvae that glow to repel predators.

Communication between bacteria (quorum sensing) plays a role in the regulation of luminesence in many bacterial species. Using small extracellularly secreted molecules, they are able to adapt their behavior to only turn on genes for light production when they are at high cell densities.

While most marine bioluminescence is green to blue, the Black Dragonfish produces a red glow. This adaptation allows the fish to see red-pigmented prey, which are normally invisible in the deep ocean environment where red light has been filtered out by the water column.[6] 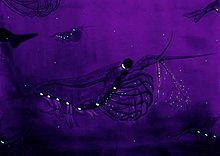 The structures of photophores, the light producing organs in bioluminescent organisms, are being investigated by industrial designers.

Some proposed applications of engineered bioluminescence include:[7]

Example of a bioluminescent species of mushroom...

...glowing with the lights off. 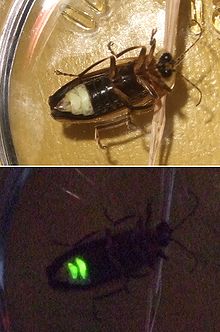 Firefly (species unknown) with and without flash. 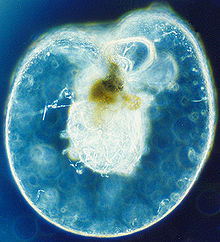 All cells produce some form of bioluminescence within the electromagnetic spectrum, but most are neither visible nor noticeable to the naked eye. Every organism's bioluminescence is unique in wavelength, duration, timing and regularity of flashes. Below follows a list of organisms which have been observed to have visible bioluminescence.