Anglerfishes are members of the teleost order Lophiiformes (pronounced /ˌlɑːfiːəˈfɔrmiːz/).[1] They are bony fishes named for their characteristic mode of predation, wherein a fleshy growth from the fish's head (the esca or illicium) acts as a lure; this is considered analogous to angling.

Some anglerfishes are pelagic (live in the open water), while others are benthic (bottom-dwelling). Some live in the deep sea (e.g., Ceratiidae) and others on the continental shelf (e.g., the frogfishes Antennariidae and the monkfish/goosefish Lophiidae). They occur worldwide. Pelagic forms are most laterally (sideways) compressed whereas the benthic forms are often extremely dorsoventrally compressed (depressed) often with large upward pointing mouths. 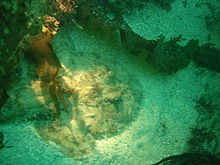 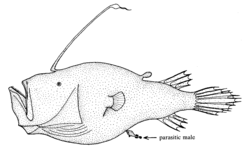 A mitochondrial genome phylogenetic study suggested that anglerfishes diversified in a short period of the early to mid Cretaceous, between 130 and 100 million years ago.[2]

The fish are named for their characteristic method of predation. Anglerfish typically have at least one long filament sprouting from the middle of the head; these are the detached and modified three first spines of the anterior dorsal fin. In most anglerfish species, the longest filament is the first (the illicium). This first spine protrudes above the fish's eyes, and terminates in an irregular growth of flesh (the esca) at the tip of the spine. The spine is movable in all directions, and the esca can be wiggled so as to resemble a prey animal, and thus to act as bait to lure other predators close enough for the anglerfish to devour them whole. The jaws are triggered in automatic reflex by contact with the tentacle.

Some deep-sea anglerfishes of the bathypelagic zone emit light from their escas to attract prey. This bioluminescence is a result of symbiosis with bacteria. The bacteria may enter the esca from the seawater through small pores; however, this is speculative and the mechanism by which ceratioids harness these bacteria is unknown. In the confines of the esca, they can multiply until their density is such that their collective glow is very bright.[3]

In most species, a wide mouth extends all around the anterior circumference of the head, and both jaws are armed with bands of long pointed teeth, which are inclined inwards, and can be depressed so as to offer no impediment to an object gliding towards the stomach, but prevent its escape from the mouth. The anglerfish is able to distend both its jaw and its stomach (its bones are thin and flexible) to enormous size, allowing it to swallow prey up to twice as large as its entire body.

Some benthic (bottom-dwelling) forms have arm-like pectoral fins which the fish use to walk along the ocean floor. The pectoral and ventral fins are so articulated as to perform the functions of feet, enabling the fish to move, or rather to walk, on the bottom of the sea, where it generally hides itself in the sand or amongst seaweed. All around its head and also along the body, the skin bears fringed appendages resembling short fronds of seaweed, a structure which, combined with the extraordinary faculty of assimilating the colour of the body to its surroundings, camouflage the fish in areas abundant with prey.

Some anglerfishes, like those of the Ceratioid group (Ceratiidae), employ an unusual mating method. Because individuals are presumably locally rare and encounters doubly so, finding a mate is problematic. When scientists first started capturing ceratioid anglerfish, they noticed that all of the specimens were females. These individuals were a few centimetres in size and almost all of them had what appeared to be parasites attached to them. It turned out that these "parasites" were highly reduced male ceratioids.

At birth, male ceratioids are already equipped with extremely well developed olfactory organs[dubious – discuss] that detect scents in the water. The male ceratioid lives solely to find and mate with a female. They are significantly smaller than a female angler fish, and may have trouble finding food in the deep sea. Furthermore, the growth of the alimentary canals of some males becomes stunted, preventing them from feeding. These features necessitate his quickly finding a female anglerfish to prevent death. The sensitive olfactory organs help the male to detect the pheromones that signal the proximity of a female anglerfish. When he finds a female, he bites into her skin, and releases an enzyme that digests the skin of his mouth and her body, fusing the pair down to the blood-vessel level. The male then slowly atrophies, first losing his digestive organs, then his brain, heart, and eyes, and ends as nothing more than a pair of gonads, which release sperm in response to hormones in the female's bloodstream indicating egg release. This extreme sexual dimorphism ensures that, when the female is ready to spawn, she has a mate immediately available.[4] Multiple males can be incorporated into a single female.

The spawn of the anglerfish of the genus Lophius consists of a thin sheet of transparent gelatinous material 0.6 or 0.9 metres (2 or 3 feet) wide and 7.6 to 9 metres (25–30 feet) long. The eggs in this sheet are in a single layer, each in its own cavity. The spawn is free in the sea. The larvae are free-swimming and have the pelvic fins elongated into filaments. Such an egg sheet is rare among fish.

One family Lophiidae is of commercial interest with fisheries found in the in north-western Europe, eastern North America, Africa and the Far East. In Europe and North America, the tail meat of fish of the genus Lophius, known as goosefish (North America) or monkfish, is widely used in cooking, and is often compared to lobster tail in taste and texture. In Asia, especially Korea and Japan, it is a delicacy.

Northwest European Lophius spp. are listed by the ICES as "outside safe biological limits."[5] Additionally, anglerfish are known to occasionally rise to the surface during El Niño, leaving large groups of dead anglerfish floating on surface.[5]

FishBase,[1] Nelson,[7] and Pietsch[8] list eighteen families, but ITIS[9] lists only sixteen. The following taxa have been arranged to show their evolutionary relationships.[8]