Camouflage
This article is about protective coloration. For other uses, see Camouflage (disambiguation).
Further information: Theory of camouflage 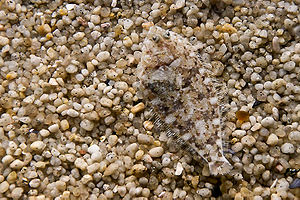 A flounder blending in with the gravel on the sea floor.

Camouflage is a method of crypsis (hiding). It allows an otherwise visible organism or object to remain unnoticed, by blending with its environment. Examples include a tiger's stripes, the battledress of a modern soldier and a butterfly camouflaging itself as a leaf. The theory of camouflage covers the various strategies used to achieve this effect. 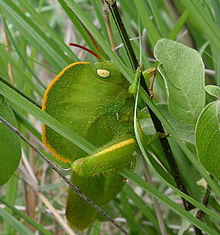 Mechanisms of color production in animals

A camouflaged sniper, an example of military camouflage 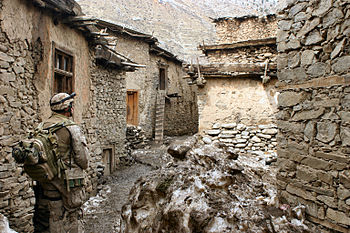 Military camouflage was not in wide use before the 20th century. 18th and 19th century armies tended to use bright colors and bold, impressive designs. These were intended to daunt the enemy, attract recruits, foster unit cohesion, or allow easier identification of units in the fog of war common to the battlefield before the invention of smokeless propellants.[citation needed]

Jäger riflemen in the 18th century were the first to adopt colors in relatively drab shades of green or grey.[citation needed] In 1857, the British in India chose to dye its white hot-weather uniforms to neutral tones, initially a muddy tan called khaki (from the Urdu word for 'dust') as a temporary measure.[citation needed] It was not until after the Second Boer War that, in 1902, the "home service" (i.e. non-tropical) field uniforms of the entire British army were standardised using a darker shade of khaki serge.[citation needed] Other armies, such as those of the United States, Russia, Italy, and Germany followed suit with khaki, grey, blue-grey or other colors more suitable for their environments, including white for use in snow.[citation needed]

Dazzle camouflage was used on ships during WWI, not to make vessels hard to see, but to make their speed and direction difficult to ascertain by eye.[citation needed]

In World War II, zoologists advised allied armies on camouflage. In England and North Africa, Hugh B. Cott encouraged the use of techniques including Countershading to provide effective concealment, observing that soldiers viewed camouflage netting as "some kind of invisibility cloak: just throw it over the truck and now you don't see it", as Peter Forbes comments.[5] In Australia William John Dakin advised soldiers to copy animals' methods, using their instincts for wartime camouflage.[6]

A new development is the use of pixelated patterns of so-called digital camouflage, such as ACUPAT, MARPAT and CADPAT.[7] 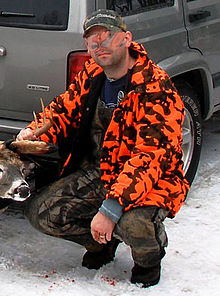 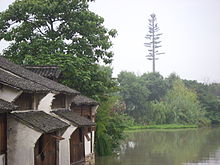 Hunters often use camouflage clothing that is visually tailored to the game they are hunting. The most striking example of this is the blaze orange camouflage, which makes the hunter obvious to humans but relies on the fact that most large game animals, such as deer, are dichromats, and perceive the orange as a dull color. On the other hand, optical brighteners, commonly used in laundry detergents to make the laundered items appear brighter, are visible to many game animals; using these will cause what appears to the human eye to be cryptically colored clothing to stand out against the background, when viewed by an animal with ultraviolet-sensitive eyes.[8]

There are several different types of hunting camouflage. The use of each one is dependent upon the area in which the hunter is going to hunt. It can range in appearance from a mossy oak pattern to a sage brush pattern for hunters of large mammals. Waterfowl hunters can have camouflage that resembles swamp reeds.