The name of the color khaki coined in British India comes from the Hindustani language (itself a borrowed form of the Persian word khak meaning dust), meaning "dusty, dust covered or earth colored." It has been used by many armies around the world for uniforms, including camouflage. Most notably, khaki was used by the British Army in India beginning in 1848.

In Western fashion, it is a standard color for smart casual dress pants (trousers) for civilians.

However, the name is sometimes also used to describe a green color similar to asparagus or pale sea green (especially by the linen/textile/lingerie industries[citation needed]). In the mid-twentieth century as many Western militaries adopted an olive drab instead of the older, more brownish khaki, the two color names became associated with each other. In French, "khaki" refers to a much darker olive drab style military green. 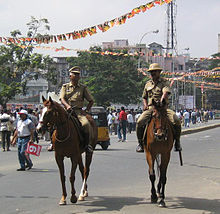 Policemen in India in their khaki-colored uniform

Initially, khaki was the characteristic color of British tropical uniforms, having a shade closer to the original Indian idea of 'dusty' brown. To these days, in common parlance of Anglo-Saxon countries, khaki as color brings to mind a brown, even beige, hue. This is not necessarily the case for the military terminology, though, often creating confusion. In common sartorial parlance 'British' or 'golden' khaki has a deeper, ochre shade than 'American' khaki, which may be described as a medium to light beige.

When khaki was adopted for the continental British Service dress in 1902, the shade chosen had a clearly darker and more greenish hue. This color was adopted with minor variations by all the British Empire Armies and the US expeditionary force of World War I, in the latter under the, probably more descriptive, name Olive Drab. This shade of brown-green remained in use by many countries throughout the two World Wars. One could roughly divide the world's Armies in the first half of the century in those wearing 'khaki' (brown-green) - US, UK, France, Russia/Soviet Union, Japan, Canada, Australia, Belgium, Holland, Turkey, Greece to name but few - and those that chose grey-green shades, foremost Germany, Austria, Italy, Yugoslavia, Bulgaria, Romania, Scandinavian countries. Then again there was dramatic variation and significant overlap between the two extremes of brown and grey, even within the same army.

During the second half of the WWII, American olive drab became distinctly greener, a major departure from the original idea of khaki. Most of the countries that participated post war in the NATO alliance, adopted the US military style and with it the green olive drab color (often called olive green for this reason). This color continued to be called khaki in many European countries. In France for example the term passed in the general language for a green-shade of olive color. The older yellow-brown used in WWI was called in France moutarde instead. Nowadays very few significant militaries still use solid olive drab or khaki for battledress - with notable exceptions the Israeli IDF and the Austrian Bundesheer, as the vast majority has adopted multicolor camouflage.

The trousers known as chinos, which became popular following World War II, were initially military-issue khaki twill used in uniforms and were invariably khaki in color. Today, the term 'chino' refers to the fabric and style of trousers based on this older model (khakis), rather than their color.

At right is displayed the web color dark khaki.[1]

This is the color that is called dark khaki (one of the X11 color names) in X11 because it is darker than X11 khaki (and also HTML/CSS Khaki).

Displayed at right is the color khaki.

This is the web color called khaki in HTML/CSS.

The color shown at right matches the color designated as khaki in the 1930 book A Dictionary of Color, the standard for color nomenclature before the introduction of computers.

The first recorded use of khaki as a color name in English was in 1848.[2]

At right is displayed the color light khaki.