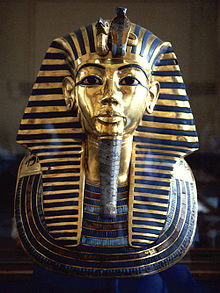 The mask of Tutankhamun is made of gold

Gold, also called golden, is one of a variety of orange-yellow color blends used to give the impression of the color of the element gold.

The web color gold is sometimes referred to as golden to distinguish it from the color metallic gold. The use of gold as a color term in traditional usage is more often applied to the color "metallic gold" (shown below).

The first recorded use of golden as a color name in English was in 1300 to refer to the element gold and in 1423 to refer to blond hair.[1]

Metallic gold, such as in paint, is often called goldtone or gold-tone. In model building, the color gold is different from brass. A shiny or metallic silvertone object can be painted with transparent yellow to obtain goldtone, something often done with Christmas decorations.

The source of this color is the ISCC-NBS Dictionary of Color Names (1955), a color dictionary used by stamp collectors to identify the colors of stamps—See color sample of the color Gold (Color Sample Gold (T) #84) displayed on indicated web page:[2]

The distinctive sheen of a metallic color cannot be indicated on a computer screen, as the web color display process has no mechanism for indicating metallic or fluorescent colors.

The first recorded use of gold as a color name in English was in the year 1400.[1]

The American Heritage Dictionary defines the color metallic gold as "A light olive-brown to dark yellow, or a moderate, strong to vivid yellow."

Of course, the visual sensation usually associated with the metal gold is its metallic shine. This cannot be reproduced by a simple solid color, because the shiny effect is due to the material's reflective brightness varying with the surface's angle to the light source.

This is why, in art, a metallic paint that glitters in an approximation of real gold would be used; a solid color like that of the cell displayed in the box to the right does not aesthetically "read" as gold. Especially in sacral art in Christian churches, real gold (as gold leaf) was used for rendering gold in paintings, e.g. for the halo of saints. Gold can also be woven into sheets of silk to give an East Asian traditional look.

More recent art styles, e.g. art nouveau, also made use of a metallic, shining gold; however, the metallic finish of such paints was added using fine aluminum powder and pigment rather than actual gold.

This is a shade of gold identified by the University of California, Berkeley in their graphic style guide for use in on-screen representations of the gold color in the university's seal. For print media, the guide recommends to, "[u]se Pantone 874 metallic or Pantone 139 yellow and 540 or 294 blue".[3]

At right is displayed the color satin sheen gold. This is the name of the color of the Starfleet command personnel uniform worn by Captain Kirk of the Starship Enterprise in the TV show and movies Star Trek.[4][6][7]

Displayed at right is the color Vegas gold.

Vegas gold, rendered within narrow limits, is associated with the glamorous casinos and hotels of the Las Vegas Strip, United States. Vegas gold, along with navy blue, is one of the official athletic colors for the University of Pittsburgh Panthers. It is also one of the official colors of the University of Central Florida Knights, the UAB Blazers, and the Pittsburgh Penguins, along with black and white. Although in the case of the Pittsburgh Penguins the color previously had been yellow. Vegas gold is also the official color of the Vanderbilt Commodores.

Old gold is a dark yellow, which varies from heavy olive or olive brown to deep or strong yellow. The widely-accepted color old gold is on the darker rather than the lighter side of this range.

The first recorded use of old gold as a color name in English was in the early 19th century (exact year uncertain).[8]

The color pale gold is displayed at right.

This has been the color called gold in Crayola crayons since 1958.

Golden poppy is a shade of gold that is the color of the California poppy-- the official state flower of California--the Golden State.

The first recorded use of golden poppy as a color name in English was in 1927.[9]

The source of this color is a color sample taken from the article on the California poppy.

The color sunglow is displayed at right.

This is a Crayola crayon color formulated in 1990.

Sunglow is also called "MU Gold" by the University of Missouri and is used as the official school color along with black.[10]

Golden yellow is the color halfway between amber and yellow. It is a color that is 87.5% yellow and 12.5% red.

The first recorded use of golden yellow as a color name in English was in the year 1597.[11]

This article is about the color. For the song by The Stranglers, see Golden Brown.

At right is displayed the color golden brown.

The first recorded use of golden brown as a color name in English was in the year 1891.[12] Golden brown is commonly referenced in recipes as the desired color of properly baked foods. 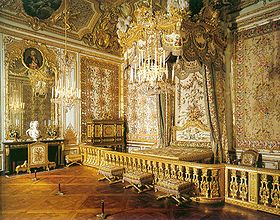 The Queen's bedchamber in the Versailles Palace.

Sororities which use gold as an official color include: