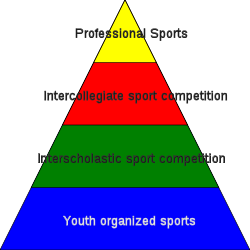 Athletic Performance Pyramid for the U.S.

College athletics refers primarily to sports and athletic competition organized and funded by institutions of tertiary education (universities, or colleges in American English). In the United States, college athletics is a two-tiered system.[1] The first tier includes the sports that are sanctioned by one of the collegiate sport governing bodies. The major sanctioning organizations include the National Collegiate Athletic Association (NCAA), the National Association of Intercollegiate Athletics (NAIA) and the National Junior College Athletic Association (NJCAA). Individual sports not governed by umbrella organizations like the NCAA, NAIA, and NJCAA are governed by their own organizations, such as the National Collegiate Boxing Association and Intercollegiate Rowing Association. Additionally, the first tier is characterized by selective participation, since only the elite athletes in their sport are able to participate. The second tier includes all intramural and recreational sports clubs, which are available to a larger portion of the student body.

Competition between student clubs from different colleges, not organized by and therefore not representing the institutions or their faculties, may also be called "intercollegiate" athletics or simply college sports. College sports originated as student activities.

In the United States today, many college sports are extremely popular on both regional and national scales, in many cases competing with professional championships for prime broadcast and print coverage. The average university will play at least 20 different sports and offer a wide variety of intramural sports as well. In total, there are approximately 400,000 men and women student-athletes that participate in sanctioned athletics each year.[2]

The first organized college sports club was formed in 1843 when Yale University created a boat club.[3] Harvard University then followed in their footsteps, creating a similar boat club a year later. The creation of these organizations set the stage for the first intercollegiate sporting event in the U.S. This event took place in 1852, when the rowing team from Yale competed against the rowing team from Harvard at Lake Winnipesaukee, New Hampshire.[3] This marked the beginning of intercollegiate competition and triggered the creation of numerous college athletic organizations.

Popularity and importance of intercollegiate athletics in the United States 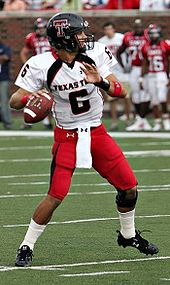 Intercollegiate athletics exist in numerous countries around the world, however nowhere does it have the impact and popularity that it does in the United States. The reasons for this are both cultural and economic. American colleges seek the publicity of being successful in college sports, believing it to be good at increasing interest from potential students and donations from alumni, whereas a university's athletic history is considered unimportant by students in most of the rest of the world and alumni donations are much less substantial. As well, in the United States, college athletics is run much like a business and ticket and merchandise sales and broadcast contracts provide a source of income for the institution, whereas in other countries universities are primarily government-funded. As well, in many European and Latin American countries, university is free-of-cost, so there is no possibility of offering the generous scholarships to athletes that American colleges do. Even where university is not free, such as in Canada or the United Kingdom, the costs for most students are highly subsidized by the government. In Canada the governing body, Canadian Interuniversity Sport, bans certain types of scholarships precisely to prevent the type of commercialization of university sport seen in the United States. For these reasons, elite international athletes may move to the United States for their higher education, although they only usually benefit financially, after higher tuition costs are accounted for, if they have "full-ride" scholarships.

Another reason for the importance of college athletics in the U.S. is the important role it plays in the hierarchy of sport organizations. In his article about collegiate sports programs, Thomas Rosandich refers to a "performance pyramid", which shows the general progression of athletic organizations in the United States.[6] At the bottom of this pyramid is youth sports organizations, since these organizations have participation open to nearly everyone. As the pyramid progresses, the level of competition increases, while the number of competitors decreases until the highest level of organized sport, professional sports, is reached. In many respects, the intercollegiate sports level serves as a feeder system to the professional level, as the elite college athletes are chosen to compete at the next level. This system differs greatly from nearly all other countries in the world, which generally have government-funded sports organizations that serve as a feeder system for professional competition. As well, in many countries professional clubs recruit athletes as children and develop them in their own academies, rather than through high school sports, signing them to professional contracts before they are done secondary school.[citation needed]

The last factor in this is the great economic impact created by college athletics in the American economy. Universities spend a very large amount of money on their college organizations in the facilities, coaches, equipment, and other aspects, and as a result produce substantial revenue from their incollegiate athletic programs in ticket and merchandise sales. The economic impact distinguishes United States collegiate athletics from the college athletics elsewhere. 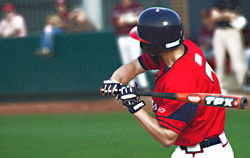 College athletes help to generate a large amount of revenue for their school, but are not personally rewarded for their contribution. Instead, this money is distributed among administrators, coaches, media outlets, and other parties. Due to the time-consuming, intense commitment that collegiate athletics entail, this could detract from an athlete's college experience. ESPN writer Robert Lipsyte contends that "a lot of athletes are simply getting cheated out of the chance for an education" since they are not able to truly focus on their studies.[9] It is for these reasons that many people believe that college athletes should be paid.

On the other hand, college athletes are often (though not always) given a full scholarship to their respective college and benefit from perks that the general student body does not receive. ESPN columnist Dan Shanoff insists that college athletes are able to take advantage of "Not just a free room and board: the best dorm rooms on campus [ and ] not just free books and classes: first choice of any classes they want".[9] A college athlete can receive up to $120,000 in total scholarships, so essentially they already are being paid for their participation. "The NCAA also is setting up a $17 million Student-Athlete Opportunity Fund that has no financial-need restrictions. It's to be used for "educational and developmental opportunities" [Nebraska Proposal, 2009]. Some would argue that the $17 million granted by this fund would be sufficient compensation. This debate has caused certain elite colleges to take caution asking athletes to sign forms that prevent them from suing the college. The signed forms gives the college full imagery benefits, allowing them to use their names to sell team t-shirts and jerseys. Insurance wise - a plan proposed by William E. Kirwan, Ohio State University President, would insure athletes against injuries and mishaps during workouts, practices and games [Lipsyte, 2009]. Furthermore, because of title IX all college athletes would have to be paid, including teams that do not produce a lot of revenue. More and more programs would be cut in order to make paying athletes work economically.