The National Junior College Athletic Association (NJCAA), founded in 1938, is an association of community college and junior college athletic departments throughout the United States. It is held as Divisions and Regions. The current NJCAA holds 24 separate regions.

The constitution presented at the charter meeting in Fresno on May 14, 1938, was accepted and the National Junior College Athletic Association became a functioning organization.

In 1949, the NJCAA was reorganized by dividing the nation into sixteen regions. The officers of the association were the president, vice president, secretary, treasurer, public relations director, and the sixteen regional vice presidents. Ironically, though the NJCAA was founded in California, it no longer operates there and has been supplanted instead by the unaffiliated California Community College Athletic Association (CCCAA) with 100+ colleges participating. 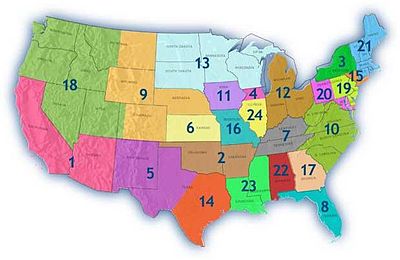 Due to the relatively small number of schools fielding teams, some football-only conferences exist. They may be home to teams from multiple regions.