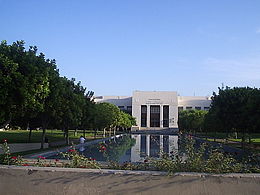 A community college is a type of educational institution. The term can have different meanings in different countries.

Community colleges carry on the tradition of adult education, which was established in Australia around mid 19th centrury when evening classes were held to help adults enhance their numeracy and literacy skills.[1] Today, courses are designed for personal development of an individual and/or for employment outcomes. The educational program covers a variety of topics such as arts, languages, business and lifestyle; and are usually timetabled to be conducted in the evenings or weekends to accommodate people working full-time. Funding for community colleges may come from government grants and course fees; and most community colleges are not-for-profit organisations. There are community colleges located in metropolitan, regional and rural locations of Australia.

Learning offered by community colleges has changed over the years. By the 1980s many colleges had recognised a community need for computer training and since then thousands of people have been up-skilled through IT courses. The majority of colleges by the late 20th century had also become Registered Training Organisations; recognising the need to offer individuals a nurturing, non-traditional education venue to gain skills that would better prepare them for the workplace and potential job openings.[2] Qualifications such as undergraduate degrees and higher are not offered at community colleges, though some community colleges do offer certificate courses I to IV.

In Canada, the 150 institutions that are the rough equivalent (or much higher) of the US community college are usually referred to simply as "colleges" since in common usage a degree granting institution used to be almost exclusively a university. In the province of Quebec, even when speaking in English, colleges are called Cégeps for Collège d'enseignement général et professionnel, meaning "College of General and Vocational Education". (The word College can also refer to a private High School in Quebec).

Colleges are educational institutions providing higher education and tertiary education, granting certificates, diplomas, associate's degrees, and bachelor's degrees. Only in Western Canada is the term Associates degree used as in the United States. In other parts of Canada a degree is usually attained as a 4 year study program, and to a much lesser degree now, in 3 years

Each Province has its own Educational system reflecting the decentralization of the Canadian provinces and therefore of the Education system. However most of the colleges began in the mid-1960s as a response education and training for the then emerging baby boom generation, and to provide training to the post second World War II European immigrants and newer immigrants from around the world, that were starting to enter the country.

The motivation for community colleges was a new way of thinking about education and training in Canada (more specifically in Ontario), and was economically based as opposed to the much earlier start in the United States of Junior and Community Colleges which was driven by an integrative social policy. Some programs are still economically based, as to the needs of the area, province and country. All programs are reviewed regularly, or every few years for relevancy. Programs and courses are changed, added or deleted according to projected economic future, while many programs are relatively stable and have been around as long as the colleges, such as various business administration programs.

Community colleges in Malaysia are a network of educational institutions whereby vocational and technical skills training could be provided at all levels for school leavers before they entered the workforce. The community colleges also provide an infrastructure for rural communities to gain skills training through short courses as well as providing access to a post-secondary education.

At the moment, most community colleges award qualifications up to Level 3 in the Malaysian Qualifications Framework (Certificate 3) in both the Skills sector (Sijil Kemahiran Malaysia or the Malaysian Skills Certificate) as well as the Vocational and Training sector but the number of community colleges that are starting to award Level 4 qualifications (Diploma) are increasing. This is two levels below a Bachelor's degree (Level 6 in the MQF) and students within the system who intend to further their studies to that level will usually seek entry into Advanced Diploma programs in public universities, polytechnics or accredited private providers.

In the Philippines, a community school functions as elementary or secondary school at daytime and towards the end of the day convert into a community college. This type of institution offers night classes under the supervision of the same principal, and the same faculty members who are given part time college teaching load.[3]

The concept of community college dates back to the time of the former Minister of Education, Culture and Sports (MECS) that had under its wings the Bureaus of Elementary Education, Secondary Education, Higher Education and Vocational-Technical Education. MECS Secretary, Dr. Cecilio Putong, who in 1971 wrote that a community school is a school established in the community, by the community, and for the community itself. Dr. Pedro T. Orata of Pangasinan shared the same idea, hence the establishment of a Community College, now called the City College of Urdaneta.[3]

A community college like the one in Abuyog, Leyte can operate with only PHP 124,000 annual budget in a 2-storey structure housing more than 700 students.[3]

In the United Kingdom, a community college is a school which not only provides education for the school age population (11-19) of the locality, but also additional services and education to adults and other members of the community.[4] This education includes but is not limited to sports, adult literacy and lifestyle education.

Fullerton College the oldest community college (originally "Junior College") in continuous operation in California, having been established in 1913 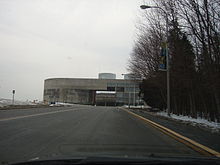 Community College of Rhode Island, the largest community college in New England at a student population of approx. 17,000 was established in 1964

After graduating from a community college, some students transfer to a four-year liberal arts college or university for two to three years to complete a bachelor's degree.

Many schools have evolved into and adapted the term comprehensive to describe their institutions. These schools typically offer five facets of education.

Within the transfer education category, comprehensive schools typically have articulation agreements in place that provide prearranged acceptance into specific four-year institutions. At some community colleges, the partnering four-year institution teaches the third and fourth year courses at the community college location and thereby allows a student to obtain a four year degree without having to physically move to the four-year school.

There are a number of institutions and organizations which provide community college research to inform practice and policy.

For background on U.S. community college libraries, see "Disposed to Consolidation and Innovation: Criteria for the Community College Specialization."[5]