EMOs function differently from charter schools created in order to carry out a particular teaching pedagogy; most charter schools are mission-oriented, while EMOs and other for-profit institutions are market-oriented. While supporters argue that the profit motive encourages efficiency it has also drawn controversy and criticism.[1] For-profit schools often lack admission standards that public and private colleges and universities use.[2]

While to some extent for-profit colleges have always existed, their numbers exploded after 1992, when after the United States House of Representatives Committee on Education and the Workforce created a federal regulation known as the "90-10 rule" and defined "institution of higher education" for the purposes of federal-aid eligibility as including for-profit institutions. The idea behind the 90-10 rule was that if a proprietary school's offerings were truly valuable—for example, if they filled some niche that traditional State and private non-profit educational institutions did not—then surely 10% of their students would be willing to pay completely out-of-pocket, i.e., those who fell above federal guidelines for receiving taxpayer subsidies to attend college. Traditional educational institutions routinely met this bar without even paying attention.[3][4][5]

Supporters claim that for-profit school operate more efficiently,[9][10] and that these increases in efficiency can lead to lower fees.[11] Moreover, they argue that financial competition encourages the schools to seek out better qualified teachers.[citation needed]

Supporters argue that for-profit schools rely on attracting students rather than compelling attendance and therefore tend to be more responsive to parents' wishes, and are especially flexible and responsive to the needs of adult learners,[12] and that they also encourage policies that address bottom-line academic performance allowing them to focus on what consumers (students) want—if parents or students do not like the service being offered, they are able to take their business elsewhere.[13] Supporters also argue that the schools' drive to attract new customers pushes them to innovate and improve at a faster rate than traditional public schools.[citation needed]

Proponents of for-profit schools claim that market operations governing the school promote effective decision- and policy-making.[citation needed] By their example, for-profit schools have the potential to encourage reform in public institutions. Thus, for-profit schools theoretically benefit children, parents, investors, and those who rely on public education.

Due to the very fast growth of for-profit schools, there have been few systematic studies of their long term impact and effectiveness. The few existing reports show mixed results.[9]

Opponents say that the fundamental purpose of an educational institution should be to educate, not to turn a profit. In 2000, Bob Chase, president of the National Education Association, stated: "Educating children is very different from producing a product."[14]

Others claim that because for-profit schools have never been a mainstream idea, no complete blueprint for running a for-profit institution really exists, which could lead school administration to make costly errors.[9] For example, in order to maximize profits, valuable services and activities are often eliminated. Extracurricular activities such as sports teams or volunteer clubs are left with little or no budgeting in order to keep costs low. This loss of non-academic activities might hurt a student's ability to enroll in some colleges or universities later on. The two largest EMOs in operation today, Edison and Advantage, claimed to have high school juniors completing college-level coursework, but recent studies have shown that many of these students are performing at or below the 11th-grade level.[8] Some former students claim that for-profit colleges make them feel like they went to the flea market and bought themselves a degree.[15]

According to James G. Andrews in a American Association of University Professors article[16] corporate models of education harm the mission of education.

Some critics have called for-profit education 'subprime education', in an analogy with the subprime mortgages bubble at the heart of the Great Recession - finding uninformed borrowers and loading them with debt they cannot afford, then securitizing and passing the loan onto third party investors. Short Seller Steve Eisman (famous for being a character in Michael Lewis' The Big Short) has described the accreditation situation regarding for-profits like ITT as follows: "The scandal here is exactly akin to the rating agency role in subprime securitizations." [17]

In the 2005 Congressional discussions concerning reauthorization of the Higher Education Act and in the US Secretary of Education's Commission on the Future of Higher Education, there have been proposals to mandate that regional accrediting agencies bar the schools they accredit from basing decisions on whether or not to accept credits for transfer solely on the accreditation of the "sending" school.[20][21] They could still reject the credits, but they would have to have additional reasons.[citation needed]

The American Commission of Career Schools and Colleges (ACCSC), a nonprofit organization created for the purpose of accrediting for-profit schools, supports the proposed rule.[22] It and other nationally accrediting institutions and have been lobbying for it for some time.[20][21] The ACCSC claims regionally accredited schools will not accept nationally accredited schools credits for purely arbitrary, prejudicial and/or anti-competitive reasons.[22] It further states that, since the Department of Education recognizes both national and regional accreditation, there is no reason for regionals to differentiate between the two and to do so amounts to an unwarranted denial of access.[20][21][22]

The position of the American Association of Collegiate Registrars and Admissions Officials (AACRAO) is that national accrediting standards are not as rigorous and, though they might be well-suited for vocational and career education, they are ill-suited for academic institutions.[6] AACRAO alleges that this proposed rule is unnecessary and unjustified, could threaten the autonomy and potentially lower the standards of regionally accredited schools, and drive up their costs.[6] Furthermore, it states the proposed rule is an attempt by the for-profits' "well-funded lobbyists" to obscure the difference between for-profits' "lax academic criteria for accreditation" and non-profits' higher standards.[6] AACRAO claims only six percent of American students attend for-profits and only four percent attempt to transfer to non-profits.[6] Eduventures, Inc, a Boston research firm, states that nine percent of all U.S. college and graduate students attend for-profit institutions.[7]

Admission representatives at Crown College (Tacoma) and Florida Metropolitan University allegedly made various misrepresentations concerning the transferability of their credits to entice students to enroll in those schools.[7]

Several of the larger for-profit schools have sought and received regional accreditation, including the following:

There have been failures of for-profit schools, including Business Computer Technology Institute (BCTI)[23][24] and Court Reporting Institute (CRI).[25][26] These two schools allegedly violated numerous federal statutes, were funded mainly from federal and state loans and grants given to attending students, and then closed, abandoning many of their students.[23][24][26]

For-profit higher education in the US has been the focus of concern regarding business practices. In August 2010, the Government Accountability Office reported on an investigation randomly sampled student-recruiting practices of several for-profit institutions. Investigators who posed as prospective students documented deceptive recruiting practices, including misleading information about costs and potential future earnings. They also reported that some recruiters had urged them to provide false information on applications for financial aid.[27]

Out of the fifteen sampled, all were found to have engaged in deceptive practices, improperly promising unrealistically high pay for graduating students, and four engaged in outright fraud, per a GAO report released at a hearing of the Health, Education, Labor and Pensions Committee held on August 4, 2010.[28] Examples of misconduct include:

The four for-profit colleges found to be engaging in fradulent practices were:

This is counter to International Education Corporation CEO Fardad Fateri's claims of the lack of use of unorthodox recruiting practices and a for-profit's "value" in an IEC open letter to Congress,[31][citation needed] the tuition cost of certificates and Associate's degrees being 28 and 6 times more than at a public college, respectively; Fateri writes, "Credit should be given to non-profit universities that have been able to convince students and their sophisticated parents to pay approximately $400,000.00 for an undergraduate degree that will seldom lead to an academically-related career." However, the most expensive college in the US, Sarah Lawrence College in Bronxville, NY, had a tuition cost of $41,040 for 2009 fiscal year,[32][33] bringing the tuition of a four-year Bachelor's degree to just above $160,000.

The institutions identified in the Committee hearing in respect to the GAO report numeration were: 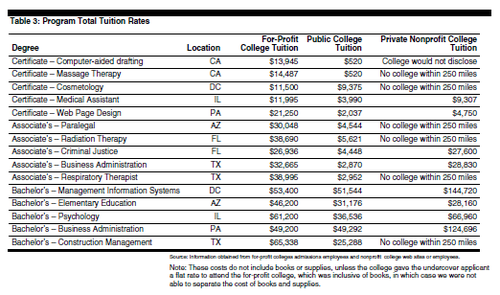 Students at for-profit institutions represent only 9% of all college students, but receive roughly 25% of all Federal Pell Grants and loans, and are responsible for 44% of all student loan defaults.[44][45] University of Phoenix tops this list with Pell Grant revenue of $656.9 million with second and third place held by Everest Colleges at $256.6 million and Kaplan College at $202.1 million for the 2008-2009 fiscal year, respectively.[46] In 2003, a Government Accountability Office report estimated that overpayments of Pell Grants were running at about 3% annually, amounting to around $300 million per year.[47] Some of the universities that are top recipients of Pell Grants have low graduation rates, leaving students degreeless, and graduating alumni may find it excessively difficult to find work[48][49] with their degrees, leading some former students to accuse recruiters of being "duplicitous", and bringing into serious question the effectiveness of awarding Pell Grants and other Title IV funds to for-profit colleges.[50][51] University of Phoenix's graduation rate is 15%.[52][53] Strayer University, which reports its loan repayment rate to be 55.4%, only has a repayment rate of roughly 25%,[54] according to data released by the U.S. Department of Education on August 13, 2010.[55] The low repayment rate makes Strayer ineligible for receiving further Title IV funds in accordance with new "Gainful employment" regulations brought forth by the Department of Education, which are to take effect on July 2011.[56] If passed, the minimum loan repayment requirement for any institution receiving Title IV funds, subject to suspension and expulsion if not compliant, will be 45%.[57]

For-profits top the Department of Education's list for the 2005-2007 cohort default rates, with campuses at ATI and Kaplan reporting default rates far above 20%. Most of the for-profits' expansion has been in the states of California, Arizona, Texas and Florida, with the metro areas of Los Angeles, Phoenix, Dallas and Miami-West Palm Beach being centers of their growth.[34][58][59][60][61] For comparison, in Miami, Everest Institute reports a default rate for two of its campuses to be 18.1% and 20%; Miami Dade College, the district's community college, which serves as a primary channel for local beginning students, reports a default rate of roughly 10%; Florida International University, a public university serving the Miami metropolitan area, reports approximately 5%.[62]

In an August 4, 2010 Health, Education, Labor and Pensions Committee hearing, Gregory Kutz of the GAO stated that the fraudulent practices may be widespread in the For-Profit industry, noting a University of Phoenix executive chart that encouraged deceptive practices.[63] Joshua Pruyn, a former admissions representative, disclosed to the committee hearing several internal emails distributed among admissions officers in March 2008 which encouraged applications and enrollments through the use of a commissions reward system.[64] Chairman of the committee Senator Thomas Harkin noted the conflict of interest due to the ACCSC, a national accrediting agency that accredits many for-profit colleges nationwide,[65] receiving compensation directly from the institutions to which it awards accreditation. The Inspector General issued an assessment in late 2009 recommending the limiting and possible suspension or expulsion of the Higher Learning Commission of the North Central Association of Colleges and Schools due to conflicts in the manner in which the accrediting agency reviews credit hours and program length for online-colleges, specifically American InterContinental University, a For-Profit college.[66] The NCA HLC accredits the University of Phoenix and Everest in Phoenix, Arizona. The Department of Education Inspector General is currently reviewing the GAO's documents and report on for-profit colleges dated August 4, 2010.

On November 30, 2010, the GAO issued a significantly revised report, altering key passages and softening several of the initial allegations.[67]

Kevin Kinser, assistant professor of educational administration and policy at the University at Albany, has proposed a "Multidimensional classification" scheme of for-profit higher education.[68] Kinser's classes of proprietary colleges are organized by these criteria: