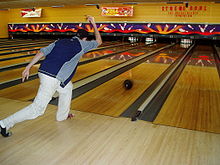 A ten-pin bowler releases the ball.

Bowling (1375–1425; late Middle English bowle, variant of boule < Middle French < Latin bulla bubble, knob; compare boil1 , bola +ing)[1][2]is a sport in which players attempt to score points by rolling a bowling ball along a flat surface, usually a wooden or synthetic surface, either into pins or to get close to a target ball.[3] The most common types include ten-pin, nine-pin, candlepin, duckpin and five-pin bowling, as well as multiple outdoor variations.

There are many forms of bowling: with one of the most recent being ten-pin bowling also known as the norm. The earliest most primitive forms of bowling can be dated back to Ancient Egypt[4] and the Roman Empire. Indeed About 2,000 years ago a similar game evolved between Roman legionaries: it entailed tossing stone objects as close as possible to other stone objects (this game became popular with Roman Soldiers, and eventually evolved into Italian Bocce, or outdoor bowling) [5].

The first standardized rules were established in New York City, on September 9, 1895.[6] Today, bowling is enjoyed by 95 million people in more than ninety countries worldwide[7] and continues to grow through entertainment media such as video games for home consoles and handheld devices.[8]

Bowling alley construction was considered “an important facet” of property development in the western United States in the late 1950s and early 1960s, described by the Los Angeles Times as “small cities in themselves”, some of which cost tens of millions of dollars (in 1960s dollars). The Los Angeles Times described developer Louis Lesser as “the most active in this field” of bowling alley developments.

By 1962, Lesser had developed nine bowling alleys. The biggest was Parkway Lanes in El Cajon, California, developed at a cost of $1 million with 60 alleys.[13] It featured five acres for parking. The facility had “varied entertainment rivaling the best in night clubs”, according to the Los Angeles Times, with headliners such as Louis Prima, Lili St. Cyr, Johnny Ray, Frankie Lane, and Roberta Linn who appeared at Parkway, developed by Lesser with Irvin Kahn and George Hirsch.

Lesser and Ted Bentley developed Legion Lanes into a 44-lane bowling alley from the Hollywood American Legion Stadium boxing arena, at El Centro and Hollywood Blvd., for $2 million ($14,520,971 when adjusted for inflation). The facility included a playroom for children, cocktail bar, billiard room, and snack bar. NBC provided its lot for temporary parking during construction, and Milt Enright became manager of the facility.

Also in 1962, Lesser planned development of bowling alleys in Australia, New Zealand, and Japan as bowling competed with cricket, soccer, and rugby as national pastimes in these countries.

Bowling is an anaerobic type of physical exercise, similar to walking with free weights. Bowling helps in burning calories and works muscle groups not usually exercised. The flexing and stretching in bowling works tendons, joints, ligaments, and muscles in the arms and promotes weight loss. While most sports are not for elderly people, it is possible to practice bowling very well at advanced ages.

Apart from the physical benefits it also has psychosocial benefits, strengthening friendships or creating new ones in groups.[14]

Like any other physical activity, warming up helps to prevent injuries. Bowling balls are heavy with varying weight ranges; to avoid back and wrist injury, they should be picked up with both hands. When picking a ball, make sure the finger holes are not too big and not too small. You also need a ball that is not too light, but heavy enough you can still throw it with ease. If the ball is too light, you will probably throw it with bad accuracy. It’s also recommended to bend one’s knees while picking up bowling balls to avoid back injuries. The bowling ball return mechanism has a driven wheel, and bowlers should keep their hands clear of it. Bowlers should also warm up their fingers before inserting them into a bowling ball, to ensure that their fingers do not get stuck in the ball.[15][16]

The most common bowling is ten pin bowling. In ten pin bowling, matches consist of each player bowling a "game." Each game is divided into ten "frames." A frame allows a bowler two chances to knock down all ten pins. The number of pins felled in each frame is recorded, a running total is made as each frame progresses, and the player with the highest score in his game wins the match. Scores can be greater than the actual number of pins felled if strikes or spares are bowled. A "strike" is scored when a player knocks down all pins on the first roll in the frame. Rather than a score of 10 for the frame, the player's score will be 10 plus the total pins knocked down on the next two rolls in the next frame(s). A "spare" is scored when all pins are knocked down using both rolls in the frame. The player's score for that frame will be 10 plus the number of pins knocked down on the first roll in the next frame. A player who rolls a spare or strike in the last frame is given one or two more rolls to score additional points, respectively.

A variation is nine pin tap (also called no-tap), a form of bowling where nine pins knocked down counts as a strike.

There are typically two different ways to roll a ball down the lane.

Beginners commonly just bowl the ball straight down the lane, hoping to hit the 1 and 2 pocket or the 1 and 3 pocket. When bowling straight like this, people often hold the ball with their hand in a "W" shaped form. What you need to do is actually bowl with the fingers pointing vertically rather than horizontally.

The hook or curve ball is commonly used by more advanced players. As the bowler releases the ball, the ball starts out straight and then "hooks" because of the rotation the bowler puts on the ball during release. When curving, most people use three fingers while some people use two. Three fingered curvers are more common and say that they have better accuracy.[citation needed]

There are three different types of styles used when releasing the ball onto the lane. The three styles are the stroker, cranker and tweener styles.

People who use the stroker style usually keep their feet square to the foul line. Stroking lessens the ball's spin rate and therefore decreases its hook/curve potential and hitting power. Strokers use finesse and accuracy.

Crankers try to create as much spin as possible by using a cupped wrist. Bowlers that use the cranking method often cup their wrist, but open the wrist at the top of the swing. Crankers often use late timing, meaning the foot reaches the foul line before the ball does; this is called "plant and pull", hardly using any slide on their last step and pulling the ball upwards for leverage. Crankers rely on speed and power.

Tweeners are bowlers that release the ball in a way that falls somewhere in between stroking and cranking. Tweeners often release the ball with a higher backswing than is normally used by a stroker or a less powerful wrist position than a cranker.

Bowling balls vary, depending on the type of bowling game. Ten-pin balls are large, up to 27 inches in circumference (approximately 8.59 inches diameter), and have as many as five holes for gripping purposes. The balls come in various weights as high as 16lbs, with the size and spacing of the finger holes often smaller on lighter balls to accommodate smaller hands. Different kinds of balls are available for different styles of bowling. There are balls for curving and balls for bowling straight. Balls for other games vary, e.g., candlepin balls which fit in the palm of the hand need no holes. Unlike most sports, the ball can be different weights based upon the player.

Bowling shoes possess an intermediate style between regular dress shoes and the athletic type. The sole of the non sliding foot is generally made of rubber similar to that of a basketball sneaker to create stability, while the sliding foot is made of a much softer material that allows a bowler to slide into his release. These shoes can be bought, but most casual players rent the shoes each visit to a facility. Be very careful while wearing them that they do not get wet on the soft material. If you do get them wet, they will not slide on the ground.[17]

A bowling glove is a glove with a metal wrist support and a textured face that offers support in order to enhance grip. There are different glove styles, including those with a full metal finger design and ones with an uncovered portion for the middle and ring fingers. There are also wristguards. They allow a bowler to keep their wrist locked into place to generate revolutions on a ball.[18]

Another form of bowling is usually played outdoors on a lawn. At outdoor bowling, the players throw a ball, which is sometimes eccentrically weighted, in an attempt to put it closest to a designated point or slot in the bowling arena. Included in the outdoor category:

Bowling is often depicted as a group date, teen outing, and blue-collar activity.

The sport has been the subject of a number of "bowling films", which prominently feature the sport of bowling. Examples include:

Bowling is an important theme in other films, as well.