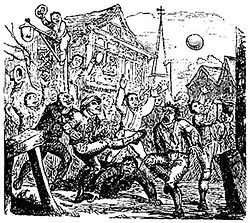 Mob football is the name given to some varieties of Medieval football, which emerged in Europe during the Middle Ages.

Mob football distinguished itself from other codes by typically having an unlimited number of players and very few rules. By some accounts, any means could be used to move the ball to a goal, as long as it did not lead to manslaughter or murder. [1] These early codes of football were forerunners of modern codes of football such as rugby football, gridiron football and association football.

Harpastum, a Roman game similar to modern Rugby Football, may have been introduced to Britannia during the Roman Conquest, although there is no historical evidence to back up this claim. [2] The uncertain origins of these games have attracted explanation by myth and legend. For example, in the UK, some claim that the games started as a celebration of the defeat of the Romans in the 3rd century.[3] The claim also exists that it was first played with the reproductive organ of a Danish ruler of England who had been deposed.[4]

Whatever their exact origins may have been, by the Middle Ages these games had generally become annual celebrations and had a tendency to get quite out of hand.[5] Mob football would have more resembled a riot than any of its descendants. The sport usually involved groups of men from two connecting villages (or two groups from either end of a single village) fighting to move a ball from one side to the other. The games were so unruly that royal bans were often placed on the playing of such sport. On 13 April 1314, Edward II of England issued what is believed to be the first royal decree:

For as much as there is a great noise in the city caused by hustling over large balls, from which many evils may arrice, what God forbid, we can command and forbid on behalf of the King, on pain of imprisonment, such games to be used in the city in future.

He prohibited the "hustling of large balls" because of the impact the sport had on the local merchants.[6] His ban was followed by decrees from Edward III of England, Henry IV of England, Henry VI of England and James III of Scotland. The sport was considered to be "un-Christian" for its lack of order.[5][7] Further restrictions against Mob Football came in 1835 with the Highway Act of 1835 prohibitting "The playing of football on public highways, with a maximum penalty of forty shillings."[8] Mob Football has been forever imortalized by the writings of William Shakespear in his The Comedy of Errors:

Am I so round with you, as you with me, That like a foot-ball you doe spurne me thus: You spurne me hence, and he will spurne me hither, If I last in this seruice, you must case me in leather.[9]

Each town or village would have played a slightly different game with rules that were not written down. The events were held on public holidays such as Shrove Tuesday when men would have been given the day off work. The sport can still be witnessed in some parts of the United Kingdom, notably Christmas and New Year in the Orkney Islands Kirkwall Ba game[10], and the Royal Shrovetide Football Match on Shrove Tuesday and Ash Wednesday in Ashbourne in Derbyshire, England.[11]