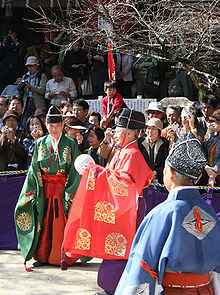 A game of Kemari at Tanzan Shrine 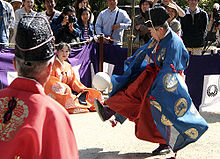 A game of Kemari at Tanzan Shrine

For Kemari or Kiamari neighborhood of Karachi, Pakistan, see Kiamari.

Kemari (Japanese: 蹴鞠) is a form of football that was popular in Japan during the Heian Period. Kemari has been revived in modern times.

The first evidence of kemari is from A.D.644.[1] The rules were standardized from the 13th century.[1] It was the first Japanese sport to become highly developed.[1]

The game was influenced by the Chinese sport of Cuju.[2] The characters for Kemari are the same as Cuju in Chinese. The sport was introduced to Japan about 600, during the Asuka period.

Nowadays, it is played in Shinto shrines for festivals.[2]

Kemari is a very physical sport; it is a whole body exercise for all ages. It is played primarily for the pleasure of those playing and watching.[1]

The object of Kemari is to keep one ball in the air,[2] with all players cooperating to do so. Players may use their head, feet, knees, back, and possibly elbows to keep the ball aloft. The ball, known as a Mari, is made of deerskin with the hair facing inside and the hide on the outside. The ball is stuffed with barley grains to give it shape. When the hide has set in this shape, the grains are removed from the ball, and it is then sewn together using the skin of a horse. The one who kicks the ball is called a mariashi. A good mariashi makes it easy for the receiver to control the mari, and serves it with a soft touch to make it easy to keep the mari in the air.

Kemari is played on a flat ground, about 6–7 meters squared.[1] The uniforms that the players wear are reminiscent of the clothes of the Asuka age and include a crow hat. This type of clothing was called kariginu and it was fashionable at that time.