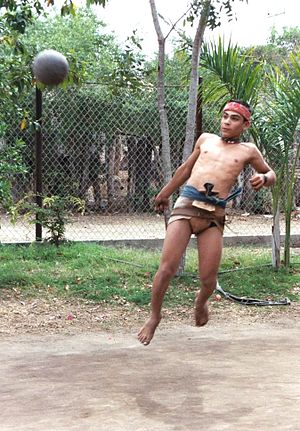 Ulama is a ball game played in a few communities in the Mexican state of Sinaloa. Descended from the Aztec version of the Mesoamerican ballgame,[1] the game is one of the oldest continuously-played sports in the world, and is also notable for the fact that it is the oldest known game utilizing a rubber ball.

The word ulama comes from the Nahuatl word ullamaliztli a combination of ullama (playing of a game with a ball) and ulli (rubber). Ullamaliztli was the Aztec name for the Mesoamerican ballgame, whose roots extended back to at least the 2nd millennium BC and evidence of which has been found in nearly all Mesoamerican cultures in an area extending from modern-day Mexico to El Salvador, and possibly in modern-day Arizona and New Mexico. Archaeologists have uncovered rubber balls dated to at least 1600 BC,[2] ballplayer figurines from at least 1200 BC, and nearly 1500 ancient ball courts.[3]

However, due to its religious and ritual aspects, Spanish Catholics suppressed the game soon after the Spanish conquest, leaving it to survive in areas such as Sinaloa, where Spanish influence was less pervasive.[4]

Ulama games are played on a temporary court called a taste (pronounced "tas-tay", a corruption of tlachtli, the Nahuatl word meaning "ballcourt"). The bounds of these long narrow courts are made by drawing or chalking thick lines in the dirt. The courts are divided into opposing sides by a center line, called an analco. A ball that is allowed to cross the end line, the chichi or chivo, will result in a point for the opposing team. Points or rayas ("lines", so named for the tally marks used to keep score) are gained in various ways. The scoring system also provides for resetting the score to zero upon certain conditions, which can make for lengthy games.

The object of the game is to keep the ball in play and in bounds. Depending on the score – and the local variant of the rules – the ball is played either high or low. A team scores a point when a player of the opposing team hits the ball out of turn; misses the ball; knocks the ball out of bounds; touches the ball with their hands or some other body part aside from the hip; accidentally touches a team-mate; lets the ball stop moving before it reaches the centre line or even if they fail to announce the score after they have scored a point.

The team that first scores eight points wins. If both teams end up having the same number of points after a turn, both sides begin again from zero. One record-setting game reputedly lasted for eight days but most modern games are stopped after about two hours. 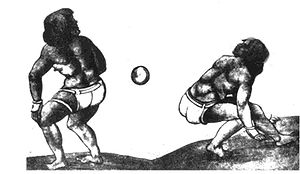 Aztec ullamaliztli players performing for Charles V in Spain, drawn by Christoph Weiditz in 1528. Note the similarity in dress to the modern-day ulama player above.