/ˈtʃɔːk/) is a soft, white, porous sedimentary rock, a form of limestone composed of the mineral calcite. Calcite is calcium carbonate or CaCO3. It forms under reasonably deep marine conditions from the gradual accumulation of minute calcite plates (coccoliths) shed from micro-organisms called coccolithophores. It is common to find chert or flint nodules embedded in chalk. Chalk can also refer to other compounds including magnesium silicate and calcium sulfate. 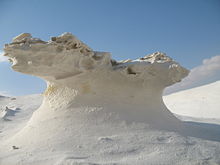 Chalk is more resistant to weathering and slumping than the clays with which it is usually associated, thus forming tall steep cliffs where chalk ridges meet the sea. Chalk hills, known as chalk downland, usually form where bands of chalk reach the surface at an angle, so forming a scarp slope. Because chalk is porous it can hold a large volume of ground water, providing a natural reservoir that releases water slowly through dry seasons.

The Chalk Group is a European stratigraphic unit deposited during the late Cretaceous Period. It forms the famous White Cliffs of Dover in Kent, England, as well as their counterparts of the Cap Blanc Nez on the other side of the Dover Strait. The Champagne region of France is mostly underlain by chalk deposits, which contain artificial caves used for wine storage. Some of the highest chalk cliffs in the world occur at Møns Klint in Denmark.

Ninety million years ago the chalk downland of Northern Europe was ooze at the bottom of a great sea. Protozoans such as foraminifera lived on the marine debris that showered down from the upper layers of the ocean. Their bodies were made of calcite extracted from the rich sea-water. As they died a deep layer built up and slowly became consolidated into rock. At a later date the sea-bed became dry land, as earth movements thrust it upward towards sea level.

Chalk is composed mostly of calcium carbonate with minor amounts of silt and clay. It is normally formed underwater, commonly on the sea bed, then consolidated and compressed during diagenesis into the form commonly seen today. During diagenesis silica accumulates to form chert or flint nodules within the carbonate rock. 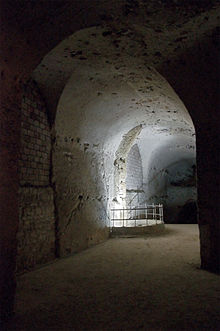 Chalk is used to make quicklime and slaked lime, mainly used as lime mortar in buildings. In southeast England, Deneholes are a notable example of ancient chalk pits. Such bell pits may also mark the sites of ancient flint mines, where the prime object was to remove flint nodules for stone tool manufacture. The surface remains at Cissbury are one such example, but perhaps the most famous is the extensive complex at Grimes Graves in Norfolk.

The traditional uses of chalk have in some cases been replaced by other substances, although the word "chalk" is often still applied to the usual replacements.