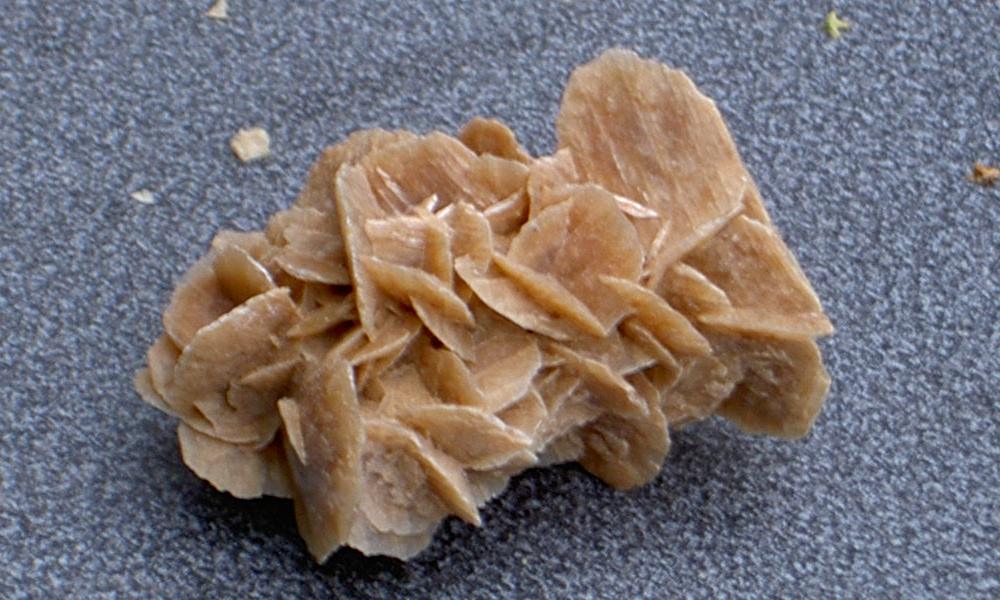 Gypsum occurs in nature as flattened and often twinned s and transparent cleavable masses called . It may also occur silky and fibrous, in which case it is commonly called "satin spar". Finally it may also be granular or quite compact. In hand-sized samples, it can be anywhere from transparent to opaque. A very fine-grained white or lightly-tinted variety of gypsum is called , which is prized for ornamental work of various sorts. In arid areas, gypsum can occur in a flower-like form typically opaque with embedded sand grains called desert rose. The most visually striking variety, however, is the giant crystals from . Up to the size of 11m long, these megacrystals are among the largest crystals found in nature. A recent publication shows that these crystals are grown under constant temperature such that large crystals can grow slowly but steadily without excessive . [cite journal |author=Juan Manuel García-Ruiz, Roberto Villasuso, Carlos Ayora, Angels Canals, and Fermín Otálora |title=Formation of natural gypsum megacrystals in Naica, Mexico |journal=Geology |volume=35 |issue=4 |pages=327–330 |year=2007 |doi=10.1130/G23393A.1]

Gypsum is a common mineral, with thick and extensive beds in association with s. Deposits are known to occur in strata from as early as the age. [Barry F. Beck, Felicity M. Pearson, P.E. LaMoreaux & Associates, National Groundwater Association (U.S.), "Karst Geohazards: Engineering and Environmental Problems in Karst Terrane", 1995, Taylor & Francis, 581 pages ISBN:9054105356] Gypsum is deposited in lake and sea water, as well as in s, from volcanic vapors, and sulfate solutions in veins. in veins is commonly hydrated to gypsum by groundwater in near surface exposures. It is often associated with the minerals and .

The word gypsum is derived from the form of the Greek verb "μαγειρεύω", "to cook", referring to the burnt or calcined mineral. Because the gypsum from the quarries of the district of has long furnished burnt gypsum used for various purposes, this material has been called . It is also used in foot creams, shampoos and many other hair products. It is water-soluble.

Because gypsum dissolves over time in water, gypsum is rarely found in the form of sand. However, the unique conditions of the in the US state of have created a 710 km² (275 square mile) expanse of white gypsum sand, enough to supply the construction industry with for 1,000 years.

Vast crystals of gypsum, up to 10 metres in length have been found in the "Cueva de los Crystales" in Naica, , . [ [http://naica.laventa.it/naica-crystal-cave.en.html NAICA, Cueva de los Cristales, Cave of the Crystals, in the Naica-Peñoles mine, cave of largest selenite (gypsum) crystals in Naica | La Venta Exploring Team ] ]

There are a large number of uses for gypsum throughout and . Some of these uses are:
*
* ingredient.
* and . In the late eighteenth and early nineteenth century, Nova Scotia gypsum, often referred to as plaister, was a highly sought fertilizer for wheat fields in the United States.
*A Binder in Fast-Dry tennis court clay.
* (surgical splints; casting moulds; modeling).
*A wood substitute in the ancient world; for example, when wood became scarce due to deforestation on , gypsum was employed in building construction at locations where wood was previously used. [ [http://letmespeaktothedriver.com/site/10854/knossos.html#fieldnotes C. Michael Hogan, "Knossos fieldnotes", Modern Antiquarian (2007)] ]
*A (soy bean curd) coagulant, making it ultimately a major source of dietary , especially in n cultures which traditionally use few .
*Adding hardness to water used for .
*Blackboard chalk.
*A component of used to prevent flash setting of concrete.
*Soil/ monitoring (soil moisture tension)
*A medicinal agent in called Shi Gao.