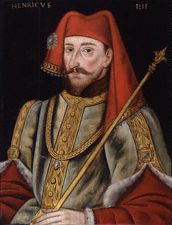 
Henry IV (3 April 1367 &ndash; 20 March 1413) was and (1399&ndash;1413). Like other kings of England, he also claimed the title of . He was born at in , hence the other name by which he was known, Henry Bolingbroke. His father, John of Gaunt, was the third son of Edward III, and enjoyed a position of considerable influence during much of the reign of Richard II. Henry's mother was Blanche, heiress to the considerable Lancaster estates.

One of his elder sisters, Philippa, married , and his younger sister Elizabeth was the mother of . His younger half-sister Catherine, the daughter of his father's second wife, Constance of Castile, ruled as co-consort of Castile, by marrying Henry III. He also had four half-siblings by , his sisters' governess and his father's longtime mistress and eventual third wife. These four children were surnamed Beaufort.

Henry's relationship with Katherine Swynford was always a positive one (she was governess to him and his sisters in youth). His relationship with the Beauforts varied considerably. In youth he seems to have been close to them all, but rivalries with Henry and Thomas Beaufort after 1406 proved problematic. His brother-in-law, Ralph Neville, remained one of his strongest supporters. So did his eldest half-brother, John Beaufort, even though Henry revoked Richard II's grant to John of a ate. , a son from Katherine's first marriage to Sir Hugh Swynford was another loyal companion and Constable of , where is said to have died. Eventually, a direct descendant of John of Gaunt and through the Beaufort line would take the throne as Henry VII.

Henry experienced a rather more inconsistent relationship with King Richard II than his father had. They were first cousins and childhood playmates, they were admitted together to the in 1377, but Henry participated in the 's rebellion against the King in 1387. After regaining power, Richard did not punish Henry (many of the other rebellious Barons were executed or exiled). In fact, Richard elevated Henry from to .

Henry spent a full year of 1390 supporting the unsuccessful siege of (capital of the ) by with his 300 fellow knights. During this campaign Henry Bolingbroke also bought captured Lithuanian princes and then apparently took them back to England. Henry's second expedition to in 1392 illustrates the financial benefits to the Order of these guest crusaders. His small army consisted of over 100 men, including archers and six minstrels, at a total cost to the Lancastrian purse of £4,360. Much of this sum benefited the local economy through the purchase of silverware and the hiring of boats and equipment. Despite the efforts of Bolingbroke and his English crusaders, two years of attacks on Vilnius proved fruitless. In 1392&ndash;1393 Henry undertook a journey to where he gained a reputation of a seasoned warrior and courtier.

However, the relationship between Henry Bolingbroke and the King encountered a second crisis in 1398, when Richard banished Henry from the kingdom for ten years after a duel of honour was called by Richard II at Gosford Green near . Before the duel could take place, Richard II banished Henry from the kingdom (with the approval of Henry's father, John of Gaunt) to avoid further bloodshed between Henry and , who was exiled for life.

John of Gaunt died in 1399, and without explanation, Richard cancelled the legal documents that would have allowed Henry to inherit Gaunt's land automatically; instead, Henry would be required to ask for the lands from Richard. After some hesitation, Henry met with the exiled , former (and future) , who had lost his position because of his involvement with the Lords Appellant. Henry and Arundel returned to England while Richard was on a military campaign in Ireland. With Arundel as his advisor, Henry Bolingbroke began a military campaign, confiscating land from those who opposed him and ordering his soldiers to destroy much of Cheshire. Henry quickly gained enough power and support to have himself declared King Henry IV, to imprison King Richard, who died in prison under mysterious circumstances, and to bypass Richard's seven-year-old heir-presumptive, Edmund de Mortimer. Henry's coronation, on 13 October 1399, is notable as the first time following the that the monarch made an address in English.

Henry consulted with Parliament frequently, but was sometimes at odds with the members, especially over ecclesiastical matters. On Arundel's advice, Henry passed the "" and was thus the first English king to allow the burning of heretics, mainly to suppress the movement.

Henry's first problem was what to do with the deposed Richard, and after an early assassination plot (The ) was foiled in January 1400, he ordered his death (very probably by starvation). The evidence for this lies in the circulation of letters in France demonstrating prior knowledge of the death. [Mortimer, "Fears of Henry IV", pp. 211-7] Richard died on 14 February 1400, and his body was put on public display in the old to prove to his supporters that he was dead. He was 33 years old.

Henry spent much of his reign defending himself against plots, rebellions, and assassination attempts.

Rebellions continued throughout the first ten years of Henry's reign, including the revolt of , who declared himself in 1400, and the rebellion of . The king's success in putting down these rebellions was due partly to the military ability of his eldest son, Henry of Monmouth, who would later become king, though the son (who had maintained a close relationship with Richard II)Fact|date=February 2007 managed to seize much effective power from his father in 1410.

In the last year of Henry's reign, the rebellions picked up speed. "The old fable of a living Richard was revived", notes one account, "and emissaries from Scotland traversed the villages of England, in the last year of Bolingbroke's reign, declaring that Richard was residing at the Scottish Court, awaiting only a signal from his friends to repair to London and recover his throne."

A suitable-looking impostor was found, and King Richard's old groom circulated word in the city that his old master was alive in Scotland. "Southwark was incited to insurrection" by Sir Elias Lyvet () and his associate Thomas Clark, who promised Scottish aid to carry out the insurrection. Ultimately, of course, the rebellion came to naught. The knight Lyvet was released; his follower thrown into the Tower. [ [http://books.google.com/books?id=oqMuAAAAMAAJ&pg=PA235&lpg=PA235&dq=lyvet+king&source=web&ots=j5ID3X8oJ4&sig=UduNk6rhJw7BokncNY98DwlUjXI&hl=en#PPA233,M1 The Book of the Princes of Wales, Heirs to the Crown of England, Dr. John Doran, London, Richard Bentley, New Burlington Street, Publisher in Ordinary to Her Majesty, 1860] ]

Early in his reign, Henry hosted the visit of , the only Byzantine emperor ever to visit England, from December 1400 to January 1401 at , with a joust being given in his honour. He also sent monetary support with him upon his departure to aid him against the Ottoman Empire.

In 1406, English pirates captured the future off the coast of Flamborough Head as he was going to France.Fact|date=March 2007 James remained a prisoner of Henry for the rest of Henry's reign.

The later years of Henry's reign were marked by serious health problems. He had a disfiguring skin disease, and more seriously suffered acute attacks of some grave illness in June 1405, April 1406, June 1408, during the winter of 1408&ndash;09, December 1412, and then finally a fatal bout in March 1413. Medical historians have long debated the nature of this affliction or afflictions. The skin disease might have been (which did not necessarily mean precisely the same thing in the 15th century as it does to modern medicine); perhaps ; perhaps a symptom of ; or some other disease. The acute attacks have been given a wide range of explanations, from to some form of cardiovascular disease. [Peter McNiven, "The Problem of Henry IV's Health, 1405&ndash;1413", "English Historical Review", 100 (1985), pp. 747&ndash;772)]

According to , it was predicted that Henry would die in Jerusalem; Shakespeare's play repeats this. Henry took this to mean that he would die on . In reality, he died at the house of the of Westminster, in the "Jerusalem" chamber. His , , was at his side.

Unusually for a , he was buried not at but at , on the north side of what is now the Trinity Chapel, as near to the shrine of as possible. (No other kings are buried in the Cathedral, although his uncle Edward, the Black Prince, is buried on the opposite, south side of the chapel, also as near the shrine as possible.) At the time, Becket's cult was at its height, as evidenced in the "" written by the court poet , and Henry was particularly devoted to it. (He was anointed at his coronation with oil supposedly given to Becket by the Virgin Mary and that had then passed to Henry's father). [Debbi Codling, "Henry IV and Personal Piety", "History Today", 57:1 (January 2007), pp. 23-29.]

:*Henry, surnamed Bolingbroke::*::* - after the punishment of the ::*2nd - Upon his father's death::*, by deposition of his cousin

Before his father's death in 1399, Henry bore the arms of the kingdom, differenced by a "label of five points ermine". After his father's death, the differenced changed to a "label of five points per pale ermine and France". [ [http://www.heraldica.org/topics/britain/cadency.htm Marks of Cadency in the British Royal Family] ] Upon his accession as king, Henry updated the arms of the kingdom to match an update in those of royal France — from a field of fleur-de-lys to just three.

eniority in line from Edward III

When Richard II resigned the throne in 1399, there was no question of who was highest in the order of succession. The country had rallied behind Henry and supported his claim in parliament. However, the question of the succession never went away. The problem lay in the fact that Henry was only the most prominent male heir. This made him heir to the throne according to Edward III's entail Fact|date=July 2008 to the crown of 1376 but, as Dr Ian Mortimer has recently pointed out in his biography of Henry IV, this had probably been supplanted by an entailFact|date=July 2008 of Richard II made in 1399. Henry thus had to remove Richard II's settlement of the throneFact|date=July 2008 on their uncle York () and Langley's Yorkist descendants and overcome the superior claim of the Mortimers in order to maintain his inheritance. This fact would later come back to haunt his grandson, , who was deposed by Edward IV, son of Richard Plantagenet, Duke of York, during the .

Mary died in 1394, and on 7 February 1403 Henry married , the daughter of Charles d'Evreux, King of Navarre, at . She was the widow of , with whom she had four daughters and four sons, but she and Henry had no children. The fact that in 1399 Henry had four sons from his first marriage was undoubtedly a clinching factor in his acceptance onto the throne. By contrast, Richard II had no children, and Richard's heir-apparent Mortimer was only seven years old.