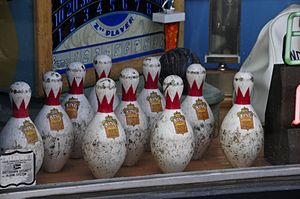 Duckpins are shorter and squatter than the pins used in 10-pin bowling.

Duckpin bowling is a variation of 10-pin bowling. The balls used in duckpin bowling are 4-3/4 in (12 cm) to 5 in (12.7 cm) in diameter (which is slightly larger than a softball), weigh 3 lb 6 oz (1.5 kg) to 3 lb 12 oz (1.7 kg) each, and lack finger holes. They are thus significantly smaller than those used in ten-pin bowling but are slightly larger and heavier than those used in candlepin bowling. The pins, while arranged in a triangular fashion identical to that used in ten-pin bowling, are shorter, smaller, and lighter than their ten-pin equivalents which makes it more difficult to achieve a strike. For this reason (and similar to candlepin bowling), the bowler is allowed three rolls per frame (as opposed to the standard two rolls per frame in ten-pin bowling).

Duckpin bowling has rules similar to ten-pin bowling. In a 10-frame game, bowlers try to knock down pins in the fewest rolls per frame. Bowlers have three balls per frame, instead of two in ten-pin bowling, to knock over a set of 10 pins. If a bowler knocks down all 10 pins with their first roll in a frame, it is scored as a strike. If all the pins are knocked down in two rolls, the bowler has made a spare. If all the pins are knocked down in three rolls, the bowler gets 10 points, as in candlepins, with no bonus. If pins are still standing after the third ball, the bowler gets one point for each pin knocked down. 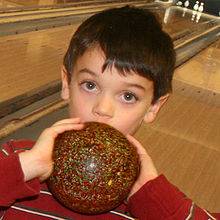 Duckpin bowling balls are easier for children to handle

The origin of the sport is a subject of some debate. One possible origin is that duckpin bowling began in Baltimore around 1900, at a bowling center owned by future baseball Hall of Famers John McGraw and Wilbert Robinson, both of the then Baltimore Orioles.

However, according to a 2005 baseball book by Howard W. Rosenberg (Cap Anson 3: Muggsy John McGraw and the Tricksters: Baseball's Fun Age of Rule Bending), an article from May 1894 in the Lowell Sun confirms the existence of duckpins. Rosenberg traced the story of crediting the origins of duckpins to McGraw and Robinson as far back as Shirley Povich of the Washington Post in the late 1930s.

In 1985, a 130-plus-page publication called Duckpins: The Tenth Frame cited related Lowell, Mass., coverage of duckpin bowling in May 1894. Writing in that publication, Bob Tkacz, of Newington, Connecticut, noted finding articles showing that a duckpin tournament was being held in Lowell at that time. The 1985 publication is not readily available from any U.S. library, which explains why Tkacz's finding was easy to miss as the earliest known "in print" rebuttal of the Baltimore origin myth. Articles can be found in the Globe earlier than May 1894 showing the existence of the sport around Boston. According to Rosenberg, the earliest Globe reference to duckpins was on January 2, 1893.

Rosenberg's book methodically accounted for Baltimore newspaper reporting in late 1899 and early 1900, when the sport seemingly was invented in Baltimore (at the McGraw-Robinson center.) Baltimore Sun next-day reporting seems to credit the center for introducing the sport to Baltimore the night before.

In 1982, the Women's National Duckpin Association was formed to give women a venue to compete in duckpins at a professional level. The organization conducts several tournaments yearly in New England and the Mid-Atlantic. The final tournament each year is called the Grand Prix.[3]