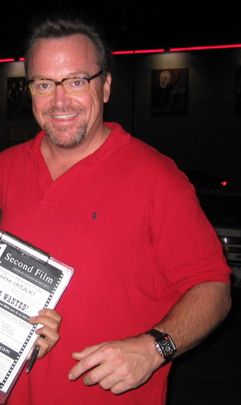 Arnold was a who became a writer for the popular television sitcom "Roseanne" (which debuted in 1988). He married the show’s star, , in 1990, after she divorced her first husband. He appeared occasionally on the show as the character “Arnie Thomas” (a spoof of his name). The couple’s marriage attracted media and especially tabloid attention due to their sometimes outrageous behavior. In 1992, Arnold starred in his own sitcom, "The Jackie Thomas Show". Airing after "Roseanne" on ABC, the show lasted 18 episodes.

In 1993, Arnold and Barr bought a house together in Arnold’s hometown of Ottumwa and opened a restaurant, Roseanne and Tom's Big Food Diner, in nearby . Both appeared in the 1993 movie "The Woman Who Loved Elvis", which was filmed in Ottumwa. Arnold and Barr divorced in 1994, and their restaurant closed in 1995. In a late-1990s interview on radio's "Howard Stern Show", Arnold admitted that his share of his and Barr’s estate amounted to “over $20,000,000,” including a percentage of the "Roseanne" ABC-TV series, but would not elaborate further, citing a confidentiality clause.

In 1994, Arnold appeared as the to ’s character in the feature film "". He later supported Schwarzenegger’s bid for the California governorship. His role in "True Lies" was parodied in an episode of "", where washed-up actor "Troy McClure" makes a comeback in a McBain movie. "The Simpsons" has also shown Tom Arnold among the people sent to the Sun in a rocket, in their 10th Halloween episode.

Arnold was a host of ’s "". He has also provided the voice for the Arby’s “Oven Mitt” character in television commercials for the fast-food chain.

Arnold had his first romantic leading man part in the 2005 movie "". That same year, Arnold starred in "", which paired him with , the son of Alec Gores.

Tom Arnold also hosted an episode of CMT's "The Biggest Redneck Wedding Ever." In this episode, he served as the wedding planner, and created a wedding that exceeded the dreams of a couple who wanted to be married in a mud bog.