An arcade game is a coin-operated entertainment machine, usually installed in public businesses such as restaurants, bars, and amusement arcades. Most arcade games are video games, pinball machines, electro-mechanical games, redemption games, and merchandisers (such as claw cranes). The golden age of arcade games was from the late 1970s to the late 1980s, and while arcade games were still relatively popular during the first half of the 1990s, this type of media saw a continuous decline in popularity when video game consoles made the transition from 2D to 3D.

The first popular "arcade games" were early amusement park midway games such as shooting galleries, ball toss games, and the earliest coin-operated machines, such as those that claim to tell a person their fortune or played mechanical music. The old midways of 1920s-era amusement parks (such as Coney Island in New York) provided the inspiration and atmosphere of later arcade games.

In the 1930s, the earliest coin-operated pinball machines were made. These early amusement devices were distinct from their later electronic cousins in that they were made of wood, did not have plungers or lit-up bonus surfaces on the playing field, and used mechanical instead of electronic scoring readouts. By around 1977, most pinball machines in production switched to using solid state electronics for both operation and scoring.[1]

In 1966, Sega introduced an early electro-mechanical arcade game called Periscope.[2] It was an early submarine simulator and light gun shooter,[3] which used lights and plastic waves to simulate sinking ships from a submarine.[4] It became a worldwide success in Japan, Europe, and North America,[5] where it was the first arcade game to cost a quarter per play,[2] which would remain the standard price for arcade games for many years to come.[5] In 1967, Taito released an early electro-mechanical arcade game of their own, Crown Soccer Special, a two-player sports game that simulated association football, using various electronic components, including electronic versions of pinball flippers.[6]

Sega later produced gun games which resemble first-person shooter video games, but were in fact electro-mechanical games that used rear image projection in a manner similar to the ancient zoetrope to produce moving animations on a screen.[7] The first of these was the light gun game Duck Hunt,[8] which Sega released in 1969;[9] it featured animated moving targets on a screen, printed out the player's score on a ticket, and had sound effects that were volume controllable.[8] That same year, Sega released an early electro-mechanical arcade racing game Grand Prix, which had a first-person view, electronic sound, a dashboard with a racing wheel and accelerator,[10] and a forward-scrolling road projected on a screen.[11] Another Sega release that year was Missile, a shooter and vehicle combat simulation that featured electronic sound and a moving film strip to represent the targets on a projection screen. It was also the earliest known arcade game to feature a joystick with a fire button, which was used as part of an early dual-control scheme, where two directional buttons are used to move the player's tank and a two-way joystick is used to shoot and steer the missile onto oncoming planes displayed on the screen; when a plane is hit, an explosion is animated on screen along with an explosion sound.[12] In 1970,[13] the game was released in North America as S.A.M.I. by Midway.[12] That same year, Sega released Jet Rocket, a combat flight simulator featuring cockpit controls that could move the player aircraft around a landscape displayed on a screen and shoot missiles onto targets that explode when hit.[14]

Throughout the 1970s, electro-mechanical arcade games were gradually replaced by electronic video games, following the release of Pong in 1972.[15] In 1972, Sega released their final electro-mechanical game Killer Shark, a first-person light gun shooter known for appearing in the 1975 film Jaws.[7] In 1974, Nintendo released Wild Gunman, a light gun shooter that used full-motion video projection from 16 mm film to display live-action cowboy opponents on the screen.[16] One of the last successful electro-mechanical arcade games was F-1, a racing game developed by Namco and distributed by Atari in 1976;[17] the game was shown in the films Dawn of the Dead (1978)[18] and Midnight Madness (1980), as was Sega's Jet Rocket in the latter film. The 1978 video game Space Invaders, however, dealt a yet more powerful blow to the popularity of electro-mechanical games.[19]

In 1971, students at Stanford University set up the Galaxy Game, a coin-operated version of the Spacewar computer game. This is the earliest known instance of a coin-operated video game. Later in the same year, Nolan Bushnell created the first mass-manufactured such game, Computer Space, for Nutting Associates.

In 1972, Atari was formed by Nolan Bushnell and Ted Dabney. Atari essentially created the coin-operated video game industry with the game Pong, the smash hit electronic ping pong video game. Pong proved to be popular, but imitators helped keep Atari from dominating the fledging coin-operated video game market. Taito's Space Invaders in 1978 proved to be an even greater success, and is now regarded as the first blockbuster arcade video game.[20] Video game arcades sprang up in shopping malls, and small "corner arcades" appeared in restaurants, grocery stores, bars and movie theaters all over the United States, Japan and other countries during the late 1970s and early 1980s. Space Invaders (1978), Galaxian (1979), Pac-Man (1980), Battlezone (1980) and Donkey Kong (1981) were especially popular.

During the late 1970s and 1980s, chains such as Chuck E. Cheese's, Ground Round, Dave and Busters, and Gatti's Pizza combined the traditional restaurant and/or bar environment with arcades.[21] By the late-1980s, the arcade video game craze was beginning to fade due to advances in home video game console technology. Arcade video games experienced a resurgence with the advent of two-player fighting games following the success of Street Fighter II (1991) by Capcom, leading to many more successful arcade fighting games such as Mortal Kombat (1992) by Midway Games, Fatal Fury: King of Fighters (1992) by SNK, Killer Instinct (1994) by Rare, and The King of Fighters (1994–2005) by SNK.

However by 1996, home video game consoles and computers with 3D accelerator cards had reached technological parity with arcade equipment—arcade games had always been based on commodity technology, but their advantage over previous generations of home system was in their ability to customize and use the latest graphics and sound chips, much as PC games of today do. Declines in arcade sales volume meant that this approach was no longer cost-effective. Furthermore, by the late 1990s and early 2000s, networked gaming via console and computers across the Internet had also appeared,[22] replacing the venue of head to head competition and social atmosphere once provided solely by arcades.[23]

The arcades also lost their status as the forefront of new game releases. Given the choice between playing a game at an arcade three or four times (perhaps 15 minutes of play for a typical arcade game), and renting, at about the same price, exactly the same game—for a video game console—the console was the clear winner. Fighting games were the most attractive feature for arcades, since they offered the prospect of face-to-face competition and tournaments, which correspondingly led players to practice more (and spend more money in the arcade), but they could not support the business all by themselves.

To remain viable, arcades added other elements to complement the video games such as redemption games, merchandisers, and food service. Referred to as "fun centers" or "family fun centers",[24] some of the longstanding chains such as Chuck E. Cheese's and Gatti's Pizza ("GattiTowns")[25] also changed to this format. Many old video game arcades have long since closed, and classic coin-operated games have become largely the province of dedicated hobbyists.

Today's arcades have found a niche in games that use special controllers largely inaccessible to home users. An alternative interpretation (one that includes fighting games, which continue to thrive and require no special controller) is that the arcade game is now a more socially-oriented hangout, with games that focus on an individual's performance, rather than the game's content, as the primary form of novelty. Examples of today's popular genres are rhythm games such as Dance Dance Revolution (1998) and DrumMania (1999), and rail shooters such as Virtua Cop (1994), Time Crisis and House of the Dead (1996). 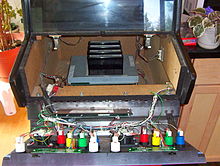 Inside of a Neo Geo

Arcade games frequently have more immersive and realistic game controls than either PC or console games, including specialized ambiance or control accessories: Fully enclosed dynamic cabinets with force feedback controls, dedicated lightguns, rear-projection displays, reproductions of automobile or airplane cockpits, motorcycle or horse-shaped controllers, or highly dedicated controllers such as dancing mats and fishing rods. These accessories are usually what set modern arcade games apart from PC or console games, as they are usually too bulky, expensive, and specialized to be used with typical home PCs and consoles.

Arcade games often have very short levels, simple and intuitive control schemes, and rapidly increasing difficulty. This is due to the environment of the Arcade, where the player is essentially renting the game for as long as their in-game avatar can stay alive (or until they run out of tokens).

Games on consoles or PCs can be referred to as "arcade games" if they share these qualities or are direct ports of arcade titles. Many independent developers are now producing games in the arcade genre that are designed specifically for use on the Internet. These games are usually designed with Flash/Java/DHTML and run directly in web-browsers.

Arcade racing games have a simplified physics engine and do not require much learning time when compared with racing simulators. Cars can turn sharply without braking or understeer, and the AI rivals are sometimes programmed so they are always near the player (rubberband effect).

Arcade flight games also use simplified physics and controls in comparison to flight simulators. These are meant to have an easy learning curve, in order to preserve their action component. Increasing numbers of console flight arcade games, from Crimson Skies to Ace Combat and Secret Weapons Over Normandy indicate the falling of manual-heavy flight sim popularity in favor of instant arcade flight action.[26]

Emulators such as MAME, which can be run on modern computers and a number of other devices, aim to preserve the games of the past.

Legitimate emulated titles started to appear on the Sony PlayStation and Sega Saturn, with CD-ROM compilations such as Arcade's Greatest Hits: The Atari Collection 1, and on the PlayStation 2 and GameCube with DVD-ROM titles such as Midway Arcade Treasures.