This tournament has determined the national champion since the inaugural 1971 NCAA Division I Men's Lacrosse Championship. Prior to this, from 1936 through 1970, the United States Intercollegiate Lacrosse Association (USILA) awarded the Wingate Memorial Trophy to the NCAA Division I annual champion based on regular season records.

The NCAA Men's Lacrosse Championship, with the semi-finals and finals played in National Football League stadiums, is among the most attended NCAA Championships, sometimes outdrawing the Final Four of men's basketball[citation needed].[1] 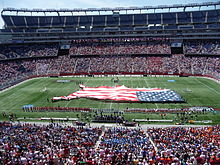 The first Division I Championship tournament held in 1971 replaced the USILA and Wingate Memorial Trophy national title awards. Since then, 39 NCAA tournaments have been held. In that span eight teams — Johns Hopkins, Syracuse, Princeton, North Carolina, Virginia, Cornell, Duke, and Maryland — have won the national title, with Syracuse leading with ten titles (plus one vacated by the NCAA[a]). The initial tournament in 1971 fielded eight teams, while the most recent tournament fielded 16 teams. In all, 41 teams have participated in the NCAA tournament since its inception. Only five unseeded teams — the 1988 Cornell Big Red, the 1991 Towson Tigers, the 2006 Massachusetts Minutemen, the 2010 Notre Dame Fighting Irish and the 2011 Maryland Terrapins — have made it to the championship game, and only seven unseeded teams have made it to the tournament semi-finals, the most recent being Maryland in 2011. Johns Hopkins has appeared in every tournament, except for 1971.

(a) The NCAA does not recognize Syracuse's participation in the 1990 tournament and therefore recognizes them as participating in 29 tournaments, having a win-loss record of 59–20 (.747 win percentage), and having 10 championships.
(b) No third-place game is held, semifinal losers credited with third-place finish