Capital One Field at Byrd Stadium (usually simply "Byrd Stadium"), is an outdoor athletic stadium on the campus of the University of Maryland in College Park, Maryland. It is the home of the Maryland Terrapins football and lacrosse teams, which compete in the Atlantic Coast Conference. The facility is named after Harry "Curley" Byrd, a multi-sport athlete, football coach, and university president in the first half of the 20th century. In August 2006, naming rights were sold to Chevy Chase Bank, which was subsequently acquired by Capital One.

Byrd Stadium, constructed at a cost of $1 million, opened September 30, 1950 in order to replace an older, much smaller stadium of the same name. For four decades, Byrd Stadium consisted of a horseshoe-shaped bowl with capacity of 34,680. In 1991, the five-story Tyser Tower, featuring luxury suites and an expanded press area, was completed on the south side of the stadium, as well as the Gossett Football Team House adjacent to the east endzone. In 1995, the stadium's capacity was raised to 48,055 through the addition of an upper deck on the north side of the stadium. In November 2001, as the football team once again became an ACC-title contender, temporary bleachers were brought in for an additional 3,000 seats. Those bleachers remain to this day. In 2002, a full-color video scoreboard was added in the east endzone and an expansion of the Gossett Football Team House was begun. The athletic department hopes to parlay the success of the Ralph Friedgen era into a stadium expansion that will increase capacity to 65,000 in the next several years [3] . Byrd Stadium's attendance record is 58,973, set on November 1, 1975. The record was achieved with temporary seating for a game featuring the #14 Terps and #9 Penn State.[4] 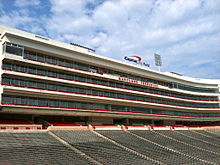 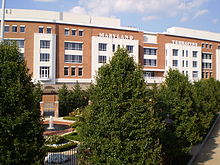 View of Tyser Tower. The Moxley Gardens can be seen in the left corner.

On August 24, 2006, the University of Maryland announced that it had agreed to a $20 million naming-rights deal with Chevy Chase Bank. The revenue from the deal was used to pay for renovations and upgrades to the Stadium. [5]

On April 25, 2007 the Athletics Department unveiled plans for a $50.8 million expansion to Byrd Stadium, a project that will increase overall capacity, add skyboxes complete with catered food and flat panel televisions and lower the field to give spectators a better view.[6]

The first phase of the expansion plans has been completed and included renovating the old press tower and building 63 luxury suites that stretch from end zone to end zone. New mezzanine seating was added as well, bringing the capacity from 51,500 to 54,000. [7] A second LED video board was installed on the west side of the stadium just before the 2008 season.[6]

The second phase is to add an 8,000 seat upper deck to the stadium's west end zone bringing total seating capacity to over 60,000. This is dependent on the sale of all existing luxury suites from phase one. To date no schedule for construction has been established.