The Orange Bowl, formerly Burdine Stadium, was an outdoor athletic stadium in Miami, Florida, west of downtown in Little Havana. Considered a landmark, it was the home stadium for the Miami Hurricanes college football team. It also hosted the professional Miami Dolphins for their first 21 seasons, until the opening of Sun Life Stadium (then called Joe Robbie Stadium) in nearby Miami Gardens in 1987. The stadium was the temporary home of the FIU Golden Panthers while its FIU Stadium underwent expansion during the 2007 season.

The Orange Bowl was demolished in 2008 to make way for the new 37,000-seat retractable-roof baseball stadium of the Miami Marlins scheduled to open in 2012. 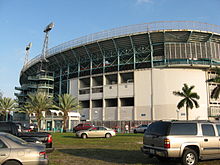 The stadium was built by the City of Miami Public Works Department. Construction began in 1936 and was completed in December 1937. The stadium opened for Miami Hurricanes football on December 10, 1937. From 1926 to 1937 the University of Miami played in a stadium near Tamiami Park and also at Moore Park until the Orange Bowl was built.

The Orange Bowl was originally named Burdine Stadium after Roddy Burdine, one of Miami's pioneers. The original stadium consisted of the two sideline lower decks. Seating was added in the endzones in the 1940s, and by the end of the 1950s the stadium was double-decked on the sidelines. In 1966, the AFL expansion Miami Dolphins played their first ever regular season game in the stadium on September 2. The west endzone upper deck section was then added in the 1960s, bringing the stadium to its peak capacity of 80,010. In 1964, the Orange Bowl Game was the first college bowl game to be televised in prime time.[6]

In 1977, the permanent seats in the east endzone were removed, and further upgrades brought the stadium to its final capacity and design. The city skyline was visible to the east through the open end, over the modern scoreboard and palm trees. The surface was natural grass, except for six seasons in the 1970s. Poly-Turf, an artificial turf similar to AstroTurf, was installed for the 1970 football season. It was removed and replaced with a type of natural grass known as "Prescription Athletic Turf" after Super Bowl X in January 1976. 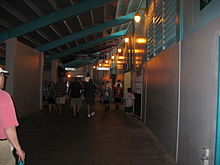 Walk-way of the O.B. 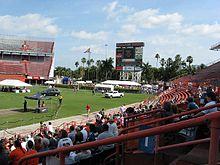 Notable winning streaks during the Shula-era in the Orange Bowl include a 13–0 streak against the Buffalo Bills and a 15–0 streak against the New England Patriots, Also of note, the Miami Dolphins enjoyed a record 31-game home winning streak from 1971–75. This 31-game streak includes four playoff wins and the perfect season of 1972. The Dolphins have not enjoyed the same level of success in Sun Life Stadium. While much of this lack of success in Sun Life Stadium is obviously attributable to a diminished level of talent and organizational stability, it is also widely recognized that the homefield advantage that the Dolphins enjoyed in the Orange Bowl was exponentially greater than in their newer home. This was in great part due to the atmosphere of the Bowl. The closeness of the seats to the field, along with the closed West End Zone, metal bleachers, and steel structure (and of course the team's success and its status as Miami's only professional sports team for so many years), gave the venue one of the loudest and most electric homefield environments in the NFL. Visiting team quarterbacks often complained to referees or were forced to call time out as their teammates could not hear them barking out the signals due to the unbearable noise, especially when the Dolphins were making a goal-line stand in the closed West End Zone. While Sun Life Stadium is much newer and cleaner and is considered one of the top facilities in the NFL, with top-notch amenities, the seats are much farther from the field, and even at its loudest, Sun Life Stadium doesn't come close to comparing to that of the Orange Bowl.

The Orange Bowl was also the site of the NCAA's longest college football home field winning streak. Between 1985 and 1994, the Miami Hurricanes won 58 straight home games at the Bowl, until ended by the Washington Huskies. The stadium's home field advantage used to include a steel structure that fans would set to rumbling by stomping their feet. Concrete reinforcement had silenced the rumble. There was still the advantage of the West End Zone, which has a relatively narrow radius that amplifies fan noise. The West End Zone was a factor in the Wide Right curse, in which the Florida State Seminoles lost a series of close games due to missed field goals. This section was so raucous that some football announcers often confused it with the student section.

In addition to football, the stadium also hosted concerts and other public events. The stadium had a regular capacity of 74,476 orange seats, and could seat up to 82,000 for concerts and other events where additional seating would have been placed on the playing field.

The last professional football game to be played in the Orange Bowl took place on April 29, 2000 and matched the Miami Tropics vs the San Antonio Matadors of the Spring Football League. The Matadors won 16–13.

The City of Miami embarked on a plan to extensively renovate the stadium. However, those plans fell by the wayside as Miami focused on keeping the Florida Marlins in town, forcing the Hurricanes to threaten a move to Dolphin Stadium (now Sun Life Stadium) in suburban Miami Gardens if a plan to renovate the stadium were not in place within 45 days. Some feared that Miami would permit the college to leave, only to tear down the Orange Bowl and replace it with the new stadium for the Marlins.

That fear became reality as Paul Dee, Athletic Director for the University of Miami, announced that the Hurricanes would be moving to Dolphin Stadium for the 2008 season. Dee and university president Donna Shalala made the announcement during a press conference at the Hecht Athletic Center on August 21, 2007. The University agreed to a 25-year contract to play at then Dolphin Stadium. According to Miami City Manager Pete Hernandez, this put the Orange Bowl back in the forefront as a possible site for a new Marlins stadium. The hope that talks would resume soon on that possibility vanished after only a short while.[8]

Many Hurricane fans vocally opposed the decision to move stadium locations and preferred maintaining the Orange Bowl as the Hurricanes' home field, out of concern of Dolphin Stadium's extra distance from campus, the severing of an icon of the Hurricanes' historical successes on the field, and potentially more expensive parking costs. 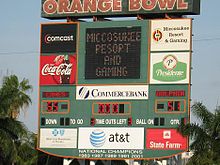 Final game at the Orange Bowl

Many fans have even stated to various broadcast, print and internet-based media outlets that they will no longer attend the games of Hurricanes football, once the team abandoned the Orange Bowl.[9] Some speculate that the decision to leave the Orange Bowl might have cursed the Miami Hurricanes and would cite the Miami Dolphins as a precedent. Indeed a common explanation for the Miami Hurricanes' poor performance during the 2007 season is that "they've never been the same since they left the Orange Bowl."[10] The University of Miami lost their final Orange Bowl game to the University of Virginia, 48–0, in front of a live ESPN audience.

In 2005, Hurricane Wilma caused structural damage to the stadium, which rekindled discussion of tearing down the aging facility. The damage was subsequently repaired.[citation needed] 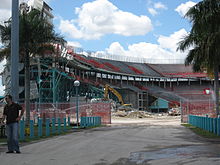 The Orange Bowl was demolished in May 2008, and the Marlins' new retractable-roof stadium is currently under construction on the site, and targeted to open in April 2012. Despite some protests, the historic stadium had been earmarked for demolition when the University of Miami announced that they were moving out of the Orange Bowl after the 2007 season to begin play at Sun Life Stadium in 2008 in a 25-year deal.[11] On November 10, 2007, the University of Miami Hurricanes lost their final game at the Orange Bowl when the Virginia Cavaliers defeated Miami 48–0 in the Hurricanes worst home shutout loss in school history.[12] 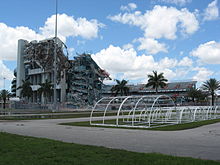 The FIU Golden Panthers won their last game at the Orange Bowl against the North Texas Mean Green on December 1, 2007 by a score of 38–19, snapping a 23-game losing streak that many attributed to the consequences of suspensions following the UM-FIU brawl the year before. Since the Golden Panthers had been using the Orange Bowl as their home field during the construction of FIU Stadium this win allows the FIU team to boast that it was they who officially closed the Orange Bowl's college football career with a home win.

A high school all-star game, "The O-D All-American Bowl", took place on January 4, 2008 and was the last game before the closing events. 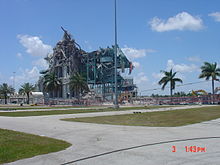 The Orange Bowl was open to the public for the last time February 8–10, 2008 when a public auction of stadium artifacts and memorabilia was held. The stadium was stripped and pieces were sold by a company called Mounted Memories. Demolition of the Orange Bowl began on March 3, 2008,[13] and was completed on May 14, 2008.

As part of the new Miami Ballpark, Miami-Dade County Art in Public Places have commissioned Daniel Arsham/Snarkitecture to design a public artwork to commemorate the Miami Orange Bowl. Their project uses the letters from the original "Miami Orange Bowl" sign as the basis for the 10-foot-tall (3.0 m) orange concrete letters rearranged across the east plaza of the new ballpark so that they form new words as visitors move around them.[14]