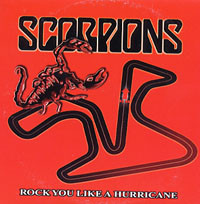 
"Rock You Like a Hurricane" is one of the most famous songs by the German band Scorpions. The song was released as the second track of their 1984 album "".

"Rock You Like a Hurricane" reached number 25 in the USA Billboard Hot 100, greatly contributing to the album's success, and MTV put the video in heavy rotation, searing it into the memory of many. Upon its release the song became a massively popular hit and is now considered one of the most influential Rock and Roll Anthems of all time. It was ranked fourth in the greatest guitar riffs of all time by "Sync" magazineFact|date=February 2007 and in named "Rock You Like a Hurricane" number 31 on their 40 Greatest Metal Songs ["VH1 40 Greatest Metal Songs", 1-4 May 2006, "VH1" Channel, reported by [http://www.vh1.com/shows/dyn/the_greatest/103446/episode_this_list.jhtml VH1.com] ; last accessed , .] .

The racetrack depicted on the sleeve corresponds to the , located in Spain.

A new version was recorded in 2000 as "Hurricane 2000" in the album "Moment of Glory", featuring Berlin Philharmonic Orchestra backing the track. In the same way, it was titled "Hurricane 2001" when played in the follow-up Acoustica.

The lyrics of "Rock You Like a Hurricane" also references the title of the album on which it's found - "".

*The chorus was used in commercials for the 1999 animated film "".
*In the 1999 film "Jawbreaker" the song is played as Rose McGowan's character seduces a man from a local bar.
*In the 2000 film "Little Nicky", the song was played after the character Nicky, played by , says to his mother upon returning to New York, "I'm gonna rock that town like a hurricane!" .
*The song was used as a promo in the 2007 movie "Blades of Glory", and also appeared on that film's soundtrack album.
*The song has also been shown in the cult show "" in the episode "The Last One".
*The song was used in the commercial.
*The song is used in the "" episode "".
*The song is also featured in a strip club scene in the movie "".
*NASCAR driver dances to the song in a promotional spot for .
*It has been featured on Applebees' commercial for the sizzling steak and chicken .
* of Christian rock band Skillet mentions the song in his , after which lead singer sings the line "Here I am".

*The song was used in the V-Rock station from the video game "".
*A cover version of the song is a playable track on the video game "".
*The song is used in the 2007 trailers and final version of as a remix for all popular consoles. It's heard during the last boss battle in the game, where the level is based on a Guitar Hero type game. In the Nintendo DS version however, it is heard during the credits.

*The song is one of several unofficial anthems of 's . , the year the song was released, was also the year the Hurricanes won their first national championship.
*The NHL use the song as the team enters the ice.
*The also use Hurricane 2000 as introductory music at the arena and extensively on the television broadcast.
*In 2006, the song caused a controversy when used by the cheerleaders in their halftime routine during a game against the . Some attending the game saw the song as being played in poor taste, given the extensive damage caused to by .
*It was also used as the theme song for the 2006 , and is the unofficial theme song for document review projects at Hunton & Williams LLP [http://www.hunton.com] .
*It's also used as the theme song of Nick Evans of the New York Mets

The song is referenced in ' 2004 novel "", in which the main characters attempt to anonymously distribute money on a round the world trip by taping parcels containing cash and bearing the line 'Here I am Rock You Like a Hurricane' onto houses, animals and other objects.

The song has been performed by Kelly Hansen (Foreigner) and guitarist George Lynch (), by metal band .