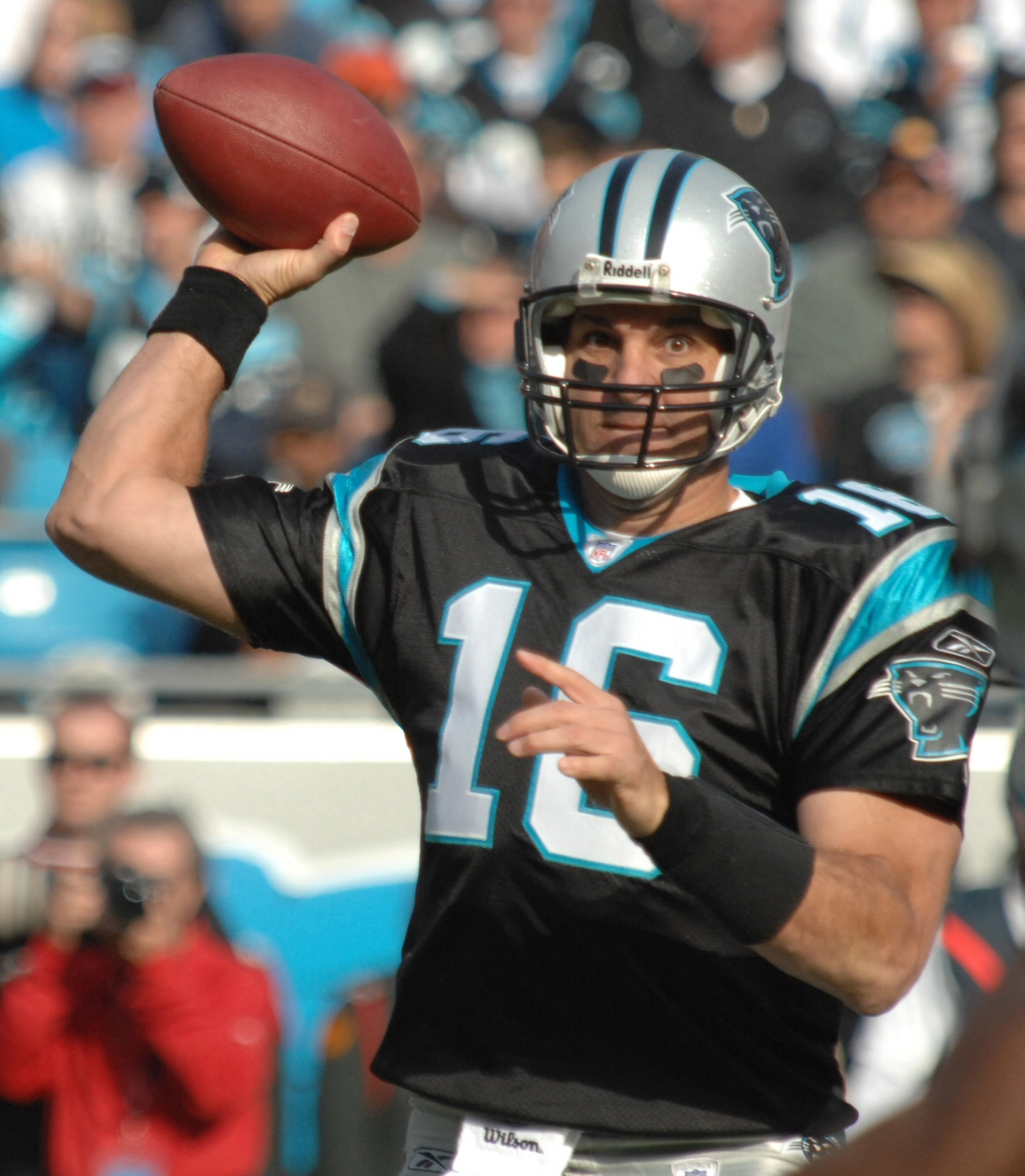 Vincent Frank Testaverde (born , in ) is a former who last played for the of the . Testaverde has previously played for the , , , , , and the . Testaverde holds the NFL records having thrown a touchdown pass in 21 consecutive seasons and an interception in 19 consecutive seasons. In addition, he holds the NFL record for throwing touchdown passes to 70 different players. As a quarterback, he won the in

While growing up in , on , Testaverde attended in Floral Park,

Testaverde was the first overall draft pick of the in the NFL draft.

In , Testaverde became the Bucs' starting quarterback, with a 47.6% completion rate for 3,240 yards and 13 touchdowns, but with 35 s. Toward the end of his tenure in Tampa, Testaverde began to receive taunts from fans and radio personalities about his . In 1991 a radio station in Tampa rented a billboard after losing to the that had Testaverde standing in front of a blue background. The billboard read: "Vinny thinks this is orange!"

Testaverde signed as an unrestricted free agent with the in 1992. After spending half a season as fellow Miami Hurricane 's backup, he became the starter upon Kosar's release. He spent three seasons in Cleveland, then moved with the Browns to Baltimore and played two more seasons with the newly-renamed . Testaverde made his first Pro Bowl appearance in 1996 with the Ravens.

In 2000, however, he returned to quarterback the Jets. The highlight of the season was the "Monday Night Miracle" game against the on , , selected by fans as the greatest game in history.

Despite his injuries, Testaverde's performance with the Jets endeared him to coach , who retired from coaching in . One year after Parcells was lured out of retirement by owner , he brought Testaverde to his new team in 2004.

Testaverde initially was signed to be a backup and mentor to young Cowboys quarterback . But after Carter was abruptly cut by the Cowboys, Testaverde was given the starting quarterback job. While many questioned Testaverde's ability to still play in the NFL, the protection schemes and play calling allowed him to showcase his arm, although with mixed results. He was able to throw for significant yardage, but led the league in interceptions, getting picked off on 4% of his passes.

Testaverde's one-year contract with the Cowboys expired early in . The Cowboys chose to instead sign Parcells's number one draft pick, , as their top quarterback, leaving Testaverde without a contract. Parcells cites Testaverde's presence in Dallas as having been important to the development of current starter .

As injuries on knocked both and backup out for the 2005 season, the New York Jets re-signed Testaverde on September 27, 2005. Testaverde was named the Jets' starting quarterback in week five of the 2005 season, in a home game against the team that originally drafted him, the Tampa Bay Buccaneers.

On , against the on the final ABC telecast of "", Testaverde set a new NFL record for most consecutive seasons with at least one pass, 19, by throwing a 27-yard pass to to secure the record. That pass is also notable as being the last touchdown pass thrown on "Monday Night Football" while it was still broadcast by ABC. The game was also notable because the Patriots sent in back-up quarterback , making this the first game in NFL history in which two quarterbacks over the age of 40 completed a pass (Testaverde was 42, Flutie was 43).

On , , the signed Testaverde as a backup to starter (the only other quarterback on New England's roster at the time was ). Testaverde kneeled down for the final play in a victory against the Packers on November 19, 2006. Testaverde threw a touchdown pass to on December 31, 2006 against the Tennessee Titans, giving him at least one touchdown pass for the twentieth straight season, breaking his own record. The Patriots defeated the Jets, Testaverde's former team, in the first round of the playoffs, and Testaverde took the last couple of snaps to run out the clock.

With out for the 2007 season due to an elbow injury he suffered in a Week 3 victory over the , and out with a sore back, the Panthers signed Testaverde on , . Testaverde, wearing # 16, started his first game with the team on , against the . In that game he threw a 65-yard touchdown pass to Steve Smith, extending his NFL record to 21 consecutive seasons with a touchdown pass. [ [http://sports.espn.go.com/nfl/news/story?id=3056695 Testaverde expected to practice with Panthers Wednesday] ] After leading the Panthers to a 25-10 victory, the 43-year-old became the oldest starting quarterback to win a game in NFL history, and the third-oldest to start one. He has also thrown touchdown passes to 71 different players, also a record. On Sunday October 28th, coach John Fox named Testaverde the starting quarterback against the Indianapolis Colts. In that game, Testaverde lead the Panthers in the longest opening drive for a touchdown in franchise history, consisting of 18 plays and lasting for an unprecedented 11 minutes and one second. Despite winning time of possession in the first half of the game, the Panthers entered the locker room under a 3-point deficit. In the second half, Testaverde left the field with a sprained Achilles tendon, and was replaced by former Houston Texans quarterback . Ultimately, the Panthers lost 31-7. Reports said that Testaverde would be out for at least a week. [ [http://sports.yahoo.com/nfl/players/70/news;_ylt=ApZI.deptBuVsnXeAw1vx_T.uLYF Vinny Testaverde - Carolina Panthers - News - NFL - Yahoo! Sports ] ]

On December 2, 2007, Testaverde became the second oldest starting quarterback in NFL history at 44 years and 19 days old. He threw two touchdown passes against the San Francisco 49ers in the Panthers' win, breaking his own record for the oldest starter to win an NFL game.

Testaverde announced his plans for retirement on December 29, 2007 which would take effect after the final game of the season for Carolina on December 30. [http://sportsillustrated.cnn.com/2007/football/nfl/12/29/bc.fbn.panthers.testaverde.ap/index.html] Panthers coach John Fox sent him into the game to take the final kneel-down snap in a game which the Panthers won 31-23, expectantly bringing to an end to the 44-year-old's 21-year NFL career. By the start of 2008, he made it official by announcing his retirement in January.

The Cleveland Browns moved to Maryland and became the Baltimore Ravens following the 1995 season. The Browns and Ravens legally have separate team records as part of the settlement of the city of Cleveland's lawsuit against the team and NFL.