The 2005 NFL season was the 86th regular season of the National Football League.

With the New England Patriots as the defending league champions, regular season play was held from September 8, 2005 to January 1, 2006. The regular season also saw the first ever regular season game played outside the United States, as well as the New Orleans Saints being forced to play elsewhere due to damage to the Superdome and the entire New Orleans area by Hurricane Katrina.

The playoffs began on January 7. New England was eliminated in the Divisional Playoff Round, and eventually the NFL title was won by the Pittsburgh Steelers, who defeated the Seattle Seahawks 21–10 in Super Bowl XL at Ford Field in Detroit, Michigan on February 5 for their fifth Super Bowl win.

The season formally concluded with the Pro Bowl, the league's all-star game, at Aloha Stadium in Honolulu, Hawaii on February 12.

This marked the final season that ABC held the rights to televise Monday Night Football after thirty-six years of airing the series. When the TV contracts were renewed near the end of the season, the rights to broadcast Monday Night Football were awarded to Disney-owned corporate sibling ESPN. NBC bought the right to televise Sunday Night Football, marking the first time that the network broadcast NFL games since Super Bowl XXXII in 1998. [1] Meanwhile, CBS and Fox renewed their television contracts to the American Football Conference and the National Football Conference packages, respectively. [2]

The 2005 season also featured the first ever regular season game played outside the United States when a San Francisco 49ers – Arizona Cardinals game was played at Estadio Azteca in Mexico City on October 2 (the Cardinals won 31–14). The game drew an NFL regular season record of 103,467 paid fans. It was a home game for the Cardinals, mostly because the team rarely sold out at their then-home field, Sun Devil Stadium in Tempe, Arizona. This season was the last year that the Cardinals played at Sun Devil Stadium; the team then moved to their new Cardinals Stadium in nearby Glendale.

Effect of the 2005 Atlantic hurricane season 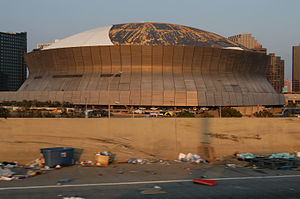 Due to the damage caused by Hurricane Katrina to the Louisiana Superdome and the greater New Orleans area, the entire New Orleans Saints' 2005 home schedule were played at different venues while the Saints set up temporary operations in San Antonio, Texas. The Saints' first home game on September 18 against the New York Giants was moved to Giants Stadium on September 19 (In which the N.Y. Giants won 27–10). The impromptu "Monday Night doubleheader" with the game already scheduled (Washington Redskins at Dallas Cowboys) was a success, and was made a permanent part of the schedule the next year when Monday Night Football made the move to ESPN. As a result of the unscheduled doubleheader, the NFL designated its second weekend, September 18 and 19, as "Hurricane Relief Weekend", with fund raising collections at all of the league's games. The Saints' remaining home games were split between the Alamodome in San Antonio and Louisiana State University's Tiger Stadium in Baton Rouge, Louisiana. Being forced to travel to 13 of their 16 games (only 3 of their games were actually played in the same city where they practiced) and practice in substandard facilities and conditions in San Antonio, the Saints finished 3–13, their worst season since 1999.

The last time an NFL franchise had to play at an alternate site because its own home field was deemed unplayable was in 2002, when the Chicago Bears played that season in Champaign, Illinois, 120 miles (200 km) away, due to the reconstruction of Soldier Field. [3] The last NFL team to abandon their home city during a season was the hapless 1952 Dallas Texans, whose franchise was returned to the league after drawing several poor crowds at the Cotton Bowl. They played their final "home" game at the Rubber Bowl in Akron, Ohio, against the Bears on Thanksgiving; the Texans stunned the Bears, 27–23, in front of a crowd estimated at 3,000, for their only win of the season. [4]

The Sunday, October 23 game between the Kansas City Chiefs and the Miami Dolphins at Dolphins Stadium was rescheduled to Friday, October 21 at 7:00 pm EDT to beat Hurricane Wilma's arrival to the Miami, Florida area.[5] The Chiefs won the game, 30–20, and became the first visiting team to travel and play on the same day.[citation needed] Since the game was planned for Sunday afternoon, it is one of the few times in history that the Dolphins wore their road jerseys in a home game played at night.

Clinched playoff seeds are marked in parentheses and shaded in green

The following teams and players set all-time NFL records during the season: