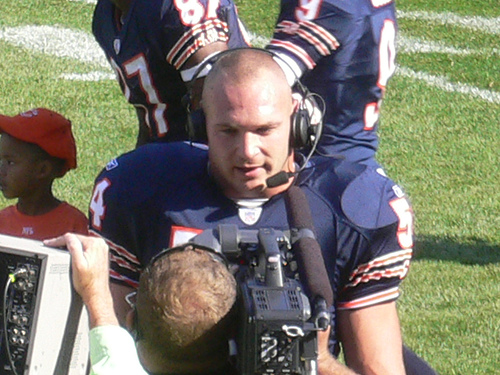 Brian Urlacher was born to Brad and Lavoyda Urlacher in . The family broke apart in the late 1980s, and Lavoyda gained of Urlacher and his siblings.

Although Urlacher was partial to attending , his dreams were cut short after the university did not offer him a much needed scholarship. The only two schools that expressed genuine interest in him were the and New Mexico State. He ultimately chose to attend the University of New Mexico.

Following the 1997 season, Franchione left the university to coach for . , an alumnus of the university and former for , helped Urlacher achieve national recognition. Under Long’s tutelage, Urlacher became a “Lobo-Back,” a cross between a and safety, and garnered much success in Long's 3-3-5 defense scheme. [cite web|url=http://golobos.cstv.com/sports/m-footbl/mtt/long_rocky00.html|title=Player Bio:Rocky Long] [cite web|url=http://www.unmalumni.com/mirage/fall2004/bighitter_print.htm
title=The Big Hitter] He recorded 422 tackles, the third most in the school’s history, three interceptions, eleven forced fumbles and sacks. He was also the team’s return specialist and clutch , catching seven passes for six touchdowns.

During the , Urlacher was selected by the with the ninth pick in the first round. Early in the season, Urlacher briefly lost his starting position to . [cite web|url=http://findarticles.com/p/articles/mi_m0FCL/is_6_31/ai_81789945
title=Meet Urlacher's trusty sidekick - Rising Star: Rosevelt Colvin] However, an to forced Urlacher to fill in as the team’s starting middle linebacker. After a productive performance against the , he became an instant hit, recording over 15 tackles in each of his next two games. Not even a minor injury could prevent Urlacher from claiming the 2000 , along with an invite to his first . Over the next two years, Urlacher distinguished himself as one of the league's most productive linebackers by recording 313 tackles, fourteen sacks and five interceptions. [cite web|url=http://www.sptimes.com/2002/12/29/Bucs/High_profile____Brian.shtml|title= High profile -- Brian Urlacher]

Under the leadership of new coach , the Bears surprised many with their performance during the . Urlacher helped lead the Bears to three come from behind victories, and two shut-outs. During week fifteen of the 2001 season, a fake field goal allowed Bears' punter to throw a game winning touchdown pass to Urlacher, giving the Bears the 's number two playoff seed. [cite web|url=http://www.washingtonpost.com/ac2/wp-dyn?pagename=article&node=&contentId=A18019-2001Dec23|title=Redskins Fall From Race] Despite their extremely productive defense, the Bears lost the divisional playoffs to the . Unfortunately, the Bears’ 2001 winning season would soon be overshadowed by three years of mediocrity. Prior to the , the Bears’ organization fired coach , and then hired . After starting the season on the lower rungs of the , Urlacher suffered several injuries, which sidelined him for a majority of the season. [cite web|url=http://tvnz.co.nz/view/sport_story_skin/465927?format=html
title=Urlacher injured again]

Monster of the midway

Despite starting the on a disastrous note, the Bears rebounded by winning eight straight games, and eventually clinched a playoff berth against the on . Urlacher played a crucial role in the Bears' playoff berth; he recorded at least ten tackles in six consecutive games, while leading the team with 121 tackles. Additionally, his leadership and seasoned judgment allowed the Bears' defense to allow the fewest points in the league. [cite web|url=http://www.actasports.com/sow.php?id=72|title=The best defense of all time?] By the time the season ended, Urlacher and the Bears had boasted the best defense in the entire . Before the regular season’s end, Urlacher was awarded with the , and an invitation to the Pro Bowl. Urlacher, who ranked among the league's top defensive tiers, received more votes than any other defensive player in the NFL. [cite web|url=http://chicago.about.com/od/sportsrecreation/a/122505_Bears.htm
title=Six Chicago Bears Named to 2006 Pro Bowl] The following week, the defeated the Bears with a score of 29-21 in the divisional playoffs.

The Bears started the 2006 season by winning nine out of eleven games. Urlacher had a prodigious performance against the during a week six game. After trailing the Cardinals by twenty points, Urlacher helped the Bears engineer a late comeback, by stripping the ball from , which led to a pivotal Bears’ recovery and touchdown. The Bears went on to win, 24-23, while Urlacher recorded eighteen total tackles (ten solo). [cite web|url=http://www.chicagobears.com/news/NewsStory.asp?story_id=2561
title=Lightning strikes twice for Urlacher] Later, he went on to overcome a serious sprained toe injury to lead the Bears to a 38-20 victory over the , and made an interception in the end-zone the following week to solidify a against the . [ [http://www.chicagobears.com/news/NewsStory.asp?story_id=2695 Bears catch up to Jets' no-huddle offense] by "Larry Mayer" of Chicagobears.com, posted 19 November, 2006.] Urlacher and the Bears concluded the season with a 13-3 record, and the NFC’s top playoff seed. Urlacher was selected as the NFC’s starting middle linebacker in the , and was named onto the ’s "2006 All-Pro Team". [cite web|url=http://www.chicagobears.com/news/NewsStory.asp?story_id=2825
title=Hester among seven Bears voted to Pro Bowl] [cite web |url=http://sports.yahoo.com/nfl/news;_ylt=AqMbR3et8MEKS6ALAZcsdTlDubYF?slug=ap-nflall-proteam&prov=ap&type=lgns|title= Tomlinson, Taylor and Bailey unanimous All-Pros] He also finished fourth in the 2006 NFL Defensive Player Award. [cite web |url= http://news.yahoo.com/s/ap/20070105/ap_on_sp_fo_ne/fbn_nfl_defensive_player |title= Taylor takes AP Defensive Player honors]

Urlacher finished the season with three interceptions and 141 total tackles, which led the and earned Urlacher a selection to his fifth . He played a pivotal defensive role in the Bears’ post-season victories over the and . Ultimately, the Bears won the , but lost to the , 29-17, at . [ [http://sports.yahoo.com/nfl/recap?gid=20070204003 Indianapolis 29, Chicago 17] ] Urlacher opted to defer his Pro Bowl trip due to the earlier toe injury he sustained. [cite web |url= http://www.chicagobears.com/news/NewsStory.asp?story_id=3041|title=Kreutz, Briggs pull out of Pro Bowl with injuries] The Bears were unable to replicate their success in the following season, and finished last in the . In the middle of the season, Urlacher admitted that he had been suffering from an arthritic back, but later claimed the ailment was not serious. [Engel, Mac, [http://www.star-telegram.com/332/story/385643.html Cowboys assistants, Falcons to talk soon] (January 2, 2008), Star-Telegram.com, Retrieved on February 9, 2008.] Nevertheless, he finished the season on a high note, registering five interceptions, five sacks, one fumble recovery, one hundred and twenty-three tackles, and a defensive touchdown. [Mayer, Larry, [http://www.chicagobears.com/news/NewsStory.asp?story_id=4323 Big plays highlighted productive season for Urlacher] (January 27, 2008), chicagobears.com, Retrieved on February 9, 2008.] Following the season’s conclusion, Urlacher received minor neck surgery to treat his arthritic back. [Associated Press, [http://sports.yahoo.com/nfl/news;_ylt=ArqrFdcIh8A9dZsvrtLFboJDubYF?slug=ap-bears-urlacher&prov=ap&type=lgns Bears linebacker Brian Urlacher has minor neck surgery] (February 8, 2008), Yahoo! Sports, Retrieved on February 9, 2008.]

Following his successful rookie season, Urlacher was able to gain popularity with the fans. Undoubtedly, he is still one of the most popular current Chicago Bears players. Bears fans consider Urlacher to be one of the "", a "" of Bears’ icons including , , and “Samurai” Mike Singletary. On a national level, Urlacher’s jersey sales have rivaled those of other NFL icons, such as and . [cite web|url=http://football.about.com/cs/footballapparel/tp/2002playjersey.htm|title=Top 10 NFL Player Jerseys|language=English] Football fans across the nation have also voted Urlacher into six .

Some skeptics and critics, however, consider Urlacher overrated. Urlacher’s injury woes in 2004 caused "" columnist to name him the NFL’s most overrated player. [cite web|url=http://www.suntimes.com/sports/mariotti/116332,CST-SPT-jay30.articlel|title='Overrated' Urlacher could be NFL MVP] Even after recovering from his injury, and winning the for the 2005 season, a 2006 "" poll of 361 NFL players named Urlacher to be the second most overrated player in the league, behind . [cite web|url=http://nfl.aolsportsblog.com/2006/10/31/overrated-terrell-owens-brian-urlacher-and-tom-brady/|title= Overrated: Terrell Owens, Brian Urlacher ... and Tom Brady?] Urlacher was unfazed by the poll’s results. During an interview, he said, "Just watch the film. I don’t know what people are saying, but I’m not too worried about it anymore. All I can do is go out there and play hard and try and help my team win, and that’s what I’m going to keep doing." [cite web|url=http://www.chicagobears.com/news/NewsStory.asp?story_id=2603|title=Adversity not slowing Urlacher's meteoric rise]

Urlacher currently lives with his two children, Pamela and Riley, with visitation rights with his son Kennedy. [cite web|url=http://cbs2chicago.com/sports/local_story_292135420.html|title=Bitter Custody Battle May Be Over For Urlacher|language=English] His younger brother, Casey, lived with him before beginning a career in the . Urlacher was married to Laurie, but they later divorced. While married to Laurie, the couple had their two daughters, Pamela and Riley.

In 2002, he appeared on "Wheel of Fortune", and won over $47,000 for charity. Urlacher, along with other Chicago Bears players, have sold autographed sports memorabilia to help fund the . Furthermore, Urlacher has been involved with charity work since his days at the University of New Mexico, where he volunteered numerous hours for the and .

In June 2005, Urlacher filed suit to establish paternity of another child, Kennedy. was completed and proved that he is Kennedy's father. Kennedy's mother, was already well-known to the media, having made unsuccessful claims of against famed dancer and a doctor from . [cite web|url=http://www.dailysouthtown.com/news/115725,2NWS5-29.article|title=Who is Tyna?|publisher=] In October 2006, Robertson refused to drive Kennedy to Urlacher’s house in and he took her to court to resolve the dispute. Ultimately, the judge decided it would be best for both Kennedy and his parents if they met at a halfway point between their residences for exchanges. [cite web|url=http://cbs2chicago.com/sports/local_story_292135420.html|title=Bitter Custody Battle May Be Over For Urlacher]

Urlacher is also a prosperous businessman. He is the owner of an [http://www.travelingusa.com/business/brianurlachercrosscountryautotucumcari/index.html?from_cat=Rentals%20and%20Dealerships auto dealership] in , and has appeared in several commercials for , , Nike, , , and . Nike also aired special commercials about Urlacher's career containing clips and commentary of plays he made. However, Urlacher later stated that he feels "uncomfortable" appearing in commercials. [cite web|url=http://www.jockbio.com/Bios/Urlacher/Urlacher_mysay.html|publisher=JockBio.com |title=Brian Urlacher "My Say"] He was also the cover athlete and spokesperson for Sega Sports' "NFL 2K3". During media day before Urlacher wore a hat promoting Glacéau vitamin water, a non-NFL approved sponsor, for which he was fined $100,000. [cite web |url=http://www.chicagobears.com/news/NewsStory.asp?story_id=3307 |title=Urlacher fined $100,000 by NFL for wearing hat |accessdate=2007-04-19 |publisher=ChicagoBears.com]

Outside football, Urlacher is a die-hard fan, and was once invited to sing "" during the , as part of the organization's tradition. He also enjoys watching , and wrestled in a pay-per-view event. The Bears organization discovered this and forced him to stop. [cite web|url=http://www.jockbio.com/Bios/Urlacher/Urlacher_numbers.html|publisher=JockBio |title=Brian Urlacher Facts] He also enjoys ing in his spare time, and during an episode of "’s Home Turf," Urlacher revealed a room in his mansion containing a plethora of golf paraphernalia. When home, Urlacher revealed that he also enjoys watching the , , and ’s "Entourage". Urlacher enjoys listening to a wide variety of music, including , , rock, and . [cite web|url=http://seehowtheylive.com/bUrlacher.php|title=AT&T's Home Turf]