Originally based in Portsmouth, Ohio and called the Portsmouth Spartans, the team began play in 1929 as an independent professional team,[1] one of many such teams in the Ohio and Scioto River valleys. For the 1930 season, the Spartans formally joined the NFL as the other area independents folded because of the Great Depression. Despite success within the NFL, they could not survive in Portsmouth, then the NFL's smallest city. The team was purchased and moved to Detroit for the 1934 season.

The Lions have won four NFL Championships, the last in 1957, giving the club the second-longest NFL championship drought behind the Arizona Cardinals. The Lions are one of four current NFL teams that have yet to qualify for the Super Bowl. The 2008 team became the only team in NFL history to lose all 16 regular season games since the NFL went to a 16-game schedule in 1978. 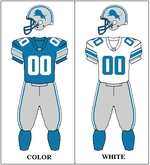 Aside from a brief change to maroon in 1948 instituted by then head coach Bo McMillin (influenced by his years as coach at Indiana), the Lions uniforms have basically remained the same since the team debuted in 1930. The design consists of silver helmets, silver pants, and either blue or white jerseys.

There have been minor changes to the uniform design throughout the years, such as changing the silver stripe patterns on the jersey sleeves, and changing the colors of the jersey numbers. White trim was added to the logo in 1970. In 1998, the team wore blue pants with their white jerseys along with grey socks but dropped that combination after the season. In 1999, the 'TV numbers' on the sleeves were moved to the shoulders.

The shade of blue used for Lions uniforms and logos is officially known as "Honolulu blue," which is supposedly inspired by the color of the waves off the coast of Hawaii. The shade was chosen by Cy Huston, the Lions first vice president and general manager, and of the choice, he said: "They had me looking at so many blues I am blue in the face," Huston said about the selection. "But anyway, it's the kind of blue, I am told, that will match with silver."

In 1994, every NFL team wore throwback jerseys, and the Lions' were similar to the jerseys used during their 1935 championship season. The helmets and pants were solid silver, the jerseys Honolulu blue with silver numbers and the jersey did not have 'TV numbers' on the sleeves. The team wore solid blue socks along with black shoes. The helmets also did not have a logo, as helmets were simple leather back then. The Lions also wore '50s-style jerseys during their traditional Thanksgiving Day games from 2001 to 2004 as the NFL encouraged teams to wear throwback jerseys on Thanksgiving Day.

In 2003, the team added black trim to their logo and the jerseys. The face masks on the helmet changed from blue to black with the introduction of the new color. Additionally, an alternate home field jersey which makes black the dominant color (in place of Honolulu Blue) was introduced in 2005.

For 2008, the team dropped the black alternate jerseys in favor of a throwback uniform to commemorate the franchise's 75th anniversary. The throwback uniform became the team's permanent alternate jersey in 2009, replacing the former black alternate.[2] The Lions officially unveiled new logo designs and uniforms on April 20, 2009. The Lion on the helmet now has a flowing mane and fangs, and the typeface of "Lions" is more modern.

The Lions have a special program called "Lions Legends" that honors noteworthy former players. The current list of legends includes not only the hall of famers listed above, but also the following players, who according to the Lions, "...Created special moments and added to the lore of football in the Motor City.":

The Lions' flagship radio stations are WXYT-FM, 97.1 FM, and WXYT-AM, 1270 AM. Dan Miller does play-by-play, Jim Brandstatter does color commentary, and Tony Ortiz provides sideline reports.[4] If a conflict with Detroit Tigers or Detroit Red Wings coverage arises, only WXYT-FM serves as the Lions' flagship. The Lions and WXYT AM/FM renewed their partnership for three more seasons on October 9, 2009.[5]

WXYZ-TV is the flagship station Lions preseason games.[6] The announcers are Matt Shepard with play-by-play, Rob Rubick with color commentary, and Tom Leyden with sideline reports.

Regular season games are broadcast regionally on Fox, except when the Lions play an AFC team in Detroit, in which case the game airs regionally on CBS. The Thanksgiving Classic game in Detroit is always televised nationally on either Fox or CBS, depending on who the visiting team is. The Detroit Lions are the only NFC team that hasn't yet played on NBC (the Houston Texans hold that distinction for the AFC) since they reacquired NFL rights in 2006.

For regular season games versus NFC opponents when Fox doesn't have a double header, WJBK produces a live postgame show.

The Lions' winless performance in 2008 and 2–14 season in 2009, coupled with the effects of the late-2000s recession in Michigan, led to several local broadcast blackouts, as local fans did not purchase enough tickets by the 72-hour blackout deadline. In 2008, five of the Lions' final six home games of the season did not sell out, with the Thanksgiving game being the exception. The first blackout in the seven-year history of Ford Field was on October 26, 2008, against the Washington Redskins. The previous 50 regular season home games had been sellouts. The second home game of the 2009 season in which the Lions broke the losing streak (also against the Washington Redskins) was blacked out locally, as well as the comeback victory over the Cleveland Browns. The Lions had only one blackout in 2010, the Washington Redskins game,[7] which the Lions won 37–25.

Games were also often blacked out at the Lions' previous home, the (perhaps over-sized) 80,000-seat Pontiac Silverdome, despite winning seasons and the success and popularity of star players such as Barry Sanders.