The United States Hockey League (USHL) is the top junior ice hockey league in the United States. The USHL has 16 member teams located in the Midwestern United States, consisting of players who are 20 years of age and younger. The USHL is strictly amateur, allowing former USHL players to compete in NCAA college hockey.

The Sioux Falls Stampede won the 2006–07 USHL championship in an expanded, 12-team playoff format. The league reverted to an 8-team divisional playoff format for the 2007–08 season.

The Indiana Ice won the 2008–09 Clark Cup championship, defeating the Fargo Force 3 games to 1 in the finals. The Ice defeated the Anderson Cup champion Green Bay Gamblers in the semi-finals.

The Green Bay Gamblers won the 2009–10 Clark Cup championship, defeating the Fargo Force 3 games to 2 in the finals. The Gamblers also won the Anderson Cup that season.

The Dubuque Fighting Saints took the 2010–2011 Clark Cup Championship in their inaugural season, defeating the defending champions Green Bay Gamblers 3 games to 1. The final game was played in front of a crowd of 3,480, the largest crowd ever to watch a hockey game in the city of Dubuque. The Cedar Rapids RoughRiders won the Anderson Cup that season before losing to Green Bay in the Clark Cup semifinals. 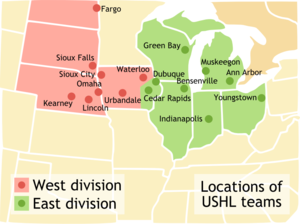 Precursors to this league were:

By the late 1970s, the USHL had fallen on hard times. In the summer of 1977, clubs from the recently folded Midwest Junior Hockey League contacted the USHL. A unique merger was formed, with the three junior teams (Bloomington Junior Stars, Austin Mavericks, St. Paul Vulcans) and three remaining pro teams (Sioux City Musketeers, Waterloo Black Hawks, Green Bay Bobcats) gathered under the USHL banner. League governors decided on a two-division format, with the junior-aged teams in the Midwest Division and the professionals in the U.S. Division. The teams played an interlocking schedule that was, predictably, dominated by the professionals. The USHL's split existence would last just two seasons. The minor-pro wing of the league folded following the 1978–79 season, providing junior hockey operators with the opportunity to redefine the circuit. The 1979–80 season was the league's first as an entirely junior arrangement.[5]

The league's last season as a senior hockey league was 1978–79. During this final season the league comprised seven teams in two conferences. The U.S. Conference (with the Green Bay Bobcats, the Sioux City Musketeers and the Waterloo Black Hawks); while the Midwest Conference (with the Anoka Nordiques, the Austin Mavericks, the Bloomington Junior Stars, and the St. Paul Vulcans. All seven teams were made up with players categorized as "Senior Amateur".[6][7][8][9][10][11][12] Following the 1978–79 season the senior league teams in the U.S. Conference folded and the USHL became an all-junior league the following season.[13]