The British Columbia Hockey League is a Junior "A" ice hockey league from British Columbia under Hockey Canada, a subsection of the Canadian Junior Hockey League. Founded in Vernon in 1961, the BCHL now includes 16 teams. These teams play in two conferences, known as the Coastal and the Interior. The winner of the BCHL playoffs (Fred Page Cup) continues on to play in the Doyle Cup in a best-of-7 series against the champion of the Alberta Junior Hockey League. The winner of the Doyle Cup will compete in the Junior "A" National Championship for the Royal Bank Cup. 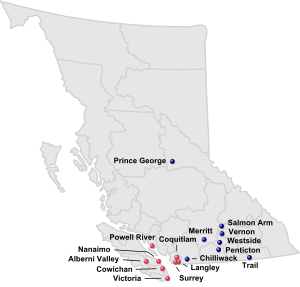 In 1961, the heads of four junior "B" hockey teams in the Okanagan region of British Columbia got together and formed the first ever Junior "A" league in British Columbia's history. The Okanagan-Mainline Junior "A" Hockey League, the precursor to the BCHL, was comprised originally of the Kamloops Jr. Rockets, the Kelowna Buckaroos, the Penticton Jr. Vees, and the Vernon Jr. Canadians.

In 1967, the league expanded out of the Okanagan region, bringing in the New Westminster Royals and the Victoria Cougars. With the expansion, the league decided that since it had stretched out of the Okanagan region, that it need a new name - The British Columbia Junior Hockey League. A year later, the Vancouver Centennials joined the league as well. In the 1970s, the Victoria Cougars jumped to the Western Hockey League and the New Westminster team was forced to fold due to the invasion of the Estevan Bruins into their arena. In 1972, the Bellingham Blazers and the Nanaimo Clippers expanded the league to 8 teams.

On a side note, in the early 1970s the Canadian Amateur Hockey Association separated the two tiers of Junior "A" hockey. The BCJHL, being a Tier II league, was disallowed from competing for the Memorial Cup. Therefore, the variety of Tier II Junior "A" leagues across Canada agreed to compete for a new trophy called the Centennial Cup. The '70s also saw the rise of a rival league for the BCJHL. The Pacific Coast Junior Hockey League, which briefly existed in the 1960s, was resurrected by Fred Page, the man that the Eastern Champion Junior "A" Fred Page Cup and the BCHL Championship trophy are named for. The Richmond Sockeyes were the PCJHL's most dominant team, which even defeated Nanaimo in the BC Championship, the Mowat Cup, to move on to what was the precursor to the Doyle Cup. In 1979, the PCJHL and the BCJHL merged. The 77-78 season proved to be a strange one. The BCJHL sent their regular season champion, the Merritt Centennials off to play in the interprovincial playdowns as league champions without playing a single playoff game. The BCJHL continued their league playoffs without them, crowning Nanaimo as the playoff champion after Penticton refused to finish the playoff finals due to a series of brawls in the third game of the series. Merritt played off against the Prince Albert Raiders of the Saskatchewan Junior Hockey League in the Abbott Cup (the Western Canada Championship) and lost in 5 games (best-of-7). The Raiders lost the Centennial Cup finals to the Guelph Platers of the Ontario Hockey Association.

In 1986, Penticton won the BCJHL's first ever National Championship defeating the Metro Valley Junior Hockey League's Cole Harbour Colts by a score of 7-4 to win the Centennial Cup. A year later, the BCJHL's Richmond Sockeyes won the league's second national title as well.

In 1990, the BCJHL was renamed to its current name, British Columbia Hockey League, and changed its logo twice, in 1990 and 2000, continues to expand with new teams and young players.

The most notable star to come from the BCHL is Olympian and National Hockey League hall of famer Brett Hull who played for Penticton. Hull holds the BCHL record for most goals in a season (105), which he set in 1983-84, a record that still stands today. Other NHLers who once played in the BCHL include Chuck Kobasew of the Colorado Avalanche who played for the since-renamed Penticton Panthers, Scott Gomez of the Montreal Canadiens, who played for South Surrey, and Carey Price of Montreal Canadiens who played for the Quesnel Millionaires. Willie Mitchell of the Los Angeles Kings is a native of British Columbia and played in the BCHL, as a member of the Kelowna Spartans, in 1994-95.

The Royal Bank Cup has been captured by a BCHL team six times since the trophy's founding: