The league currently consists of five divisions with a total of 28 teams. The teams span the United States from New York in the East to California in the West; from Alaska in the North to Texas in the South. The teams play a 58-game regular season, starting in mid-September and ending in early April. The winner of each division will join the host team of the Robertson Cup Championship Tournament, a six team round-robin event.

From its beginning in 1975, the NAHL was primarily a 6-12 team league based in the Midwest. All that changed in 2003 when the league and the defunct America West Hockey League merged to form a 19-team league, which has since grown to an all-time high of 28 for the 2011-12 season 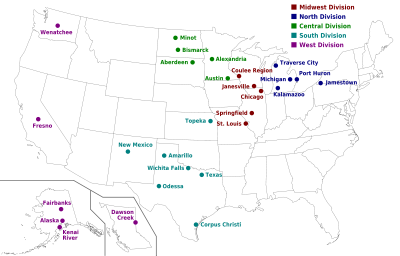 2008-2009 season: The Southern Minnesota Express moved to Detroit and changed their name to the Motor City Machine.[3] However, the Express' home city of Owatonna was granted another NAHL team for 2008-09, named the Owatonna Express.[4] The Express are joined by another new Minnesota NAHL franschise, the Albert Lea Thunder.[5] The Texas Tornado franchise will go dark for a year as they await renovations on their arena. Wenatchee, Washington has been awarded an expansion franchise for the 2008-09 season.[6] The Fargo-Moorhead Jets are approved for dormancy. .[7]

2009-2010 season: The Janesville Jets are awarded an expansion franchise.[8] The Mahoning Valley Phantoms leave the league for the USHL.[9] The USNTDP also leave the league.[10] The Texas Tornado return to the league after taking a year off while their home arena was undergoing renovations.[11] The Motor City franchise's new ownership changes the team's nickname from Machine to Metal Jackets.[12]