Odessa is a city in and the county seat of Ector County, Texas, United States. It is located primarily in Ector County, although a small portion of the city extends into Midland County. [3] Odessa's population was 99,940 at the 2010 census.[4] It is the principal city of the Odessa, Texas Metropolitan Statistical Area, which includes all of Ector County. The metropolitan area is also a component of the larger Midland–Odessa, Texas Combined Statistical Area, which had a population of 266,941 as of July 1, 2009. estimate.[5]

Odessa was founded in 1881 as a water stop and cattle shipping point on the Texas and Pacific Railway. The first post office opened in 1885. Odessa became the county seat of Ector county in 1891 when Ector county was first organized. It became an incorporated city in 1927, after oil was discovered in Ector county on the Connell Ranch southwest of Odessa.[6][7]

The Midland-Odessa Symphony & Chorale (MOSC) has performed in the Permian Basin for over 45 years, and is the region's largest orchestral organization, presenting both Pops and Masterworks concerts throughout the year. Composed of professional musicians from the area as well as Lubbock, San Angelo and other surrounding cities, the MOSC also is home to three resident chamber ensembles, the Lone Star Brass, Permian Basin String Quartet and West Texas Winds. These ensembles are made up of principal musicians in the orchestra, who come to the area from across the United States.

The Globe of the Great Southwest, located on the campus of Odessa College, the community college in Odessa, features an authentic replica of William Shakespeare's Globe Theatre. It hosts plays and other community groups throughout the year as well as an annual Shakespeare festival.

Built in 1951, the Ector Theater served as one Odessa's finest theaters until it closed. Today, the renovated 700-seat theater provides the community with classic movies, live theatrical productions and concerts.

The Permian Playhouse has provided music, dance, drama, suspense, tears and comedy for over 40 years.

Odessa is home to the West Texas Roughnecks, a team in the Indoor Football League. The Odessa Jackalopes are a junior A ice hockey team that play their home games at Ector County Coliseum. High school football is also popular. Ratliff Stadium which was featured in the movie Friday Night Lights is home to the Odessa Bronchos and the Permian Panthers. It is one of the largest high school stadiums in the state.[citation needed] 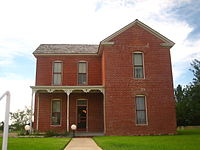 The White-Pool House, built in 1887, is the oldest structure still standing in Odessa. Open to visitors at 112 East Murphy Street near South Grant Avenue, the building is included among the National Register of Historic Places.

Odessa's Presidential Museum and Leadership Library, on the campus of the University of Texas of the Permian Basin, is the only facility of its kind in the United States—dedicated to the office of the Presidency, not any particular holder of the Oval Office. There are also displays about the Presidents of the Republic of Texas. The museum was pushed to fruition by the late State Representative George "Buddy" West of Odessa.

The White-Pool House east of downtown is the oldest surviving structure in Odessa. It was built in 1887 and opened as an historic house museum in 1984.

Texon Santa Fe Depot has recently been relocated to West Odessa and serves as a museum in honor of the old west and the railroads.

The Parker House Museum is Odessa's newest addition to the historical records of Odessa. In 1935, the Parker family moved into this modest house located on 1,290 acres (5.2 km2). It represents the lifestyle of a prominent ranching family, who served the communities of Andrews and Ector counties since 1907

Odessa Meteor Crater, an impact crater with 550 feet (170 m) in diameter, is located southwest of the city.

Odessa has a Stonehenge replica on the campus of the University of Texas of the Permian Basin. Completed in 2004, the replica is horizontally equal to the Stonehenge in England but only 70 percent of the vertical height of the original.

There were 53,216 households out of which 37.9% had children under the age of 18 living with them, 51.6% were married couples living together, 14.5% had a female householder with no husband present, and 29.6% were non-families. Of these 18% were alternative lifestyle households, including a small transgender community.[citation needed] Odessa had the highest per capita rate of non-traditional households in Texas for all municipalities with more than 50,000 residents.[citation needed] 25.7% of all households were made up of individuals and 9.6% had someone living alone who was 65 years of age or older. The average household size was 2.65 and the average family size was 3.21.

The structure of the management and coordination of city services is:[14]

The Ector County Career Center is an alternative to the two high schools in the city and is affiliated with ECISD. It pulls an equal number of students from the two high school campuses and does so through an application basis for those interested in attending. Students attending The Career Center are classified as students at either Odessa High or Permian High and graduate with them.

Richard Milburn Academy, a private high school, was founded in 2003 and is free to the public although not affiliated with ECISD.

The University of Texas of the Permian Basin, the Texas Tech University Health Sciences Center, and Odessa College are all located in Odessa.

The University of Texas of the Permian Basin began in 1973. UTPB was an upper level and graduate university until the Texas Legislature passed a bill in spring 1991 to allow the university to accept freshmen and sophomores. The Institute provides seminars, training and research on public leadership all over Texas, and offers a Bachelor of Arts degree in Leadership Studies. The Institute is also well regarded for its Shepperd Distinguished Lecture Series, which has brought a variety of internationally-recognized individuals, such as Mikhail Gorbachev, Robert McNamara, Ralph Nader, William F. Buckley, Jr., and most recently Malcolm Gladwell to discuss salient political and social topics. As of 2006, the university was holding discussions with the Nuclear Regulatory Commission about construction of a new High-Temperature Teaching and Test Reactor which, if successful, would finish licensing and construction around 2012. It would also be the first university based research reactor to be built in the US in roughly a decade and be one of the few HTGR type reactors in the world. In January 2006, UTPB's School of Business was awarded accreditation by the Association to Advance Collegiate Schools of Business International (AACSB). AACSB is generally regarded as the premier accreditation agency for the world's business schools. According to the University, only 30 percent of business schools in the United States, and 15 percent of world business schools, have received AACSB accreditation.

Odessa College is a public two-year college based in Odessa, Texas, USA serving the people of Ector County and the Permian Basin. It opened in 1952 and currently enrolls about 5,000 annually in its university-parallel and occupational/technical courses, and 11,000 students annually in its Basic Education, Continuing Education, and Community Recreation courses.

According to the City's 2010 Comprehensive Annual Financial Report,[13] the top employers in the city are:

Though the economy is primarily driven by the area's oil industry, new economic steps are currently being taken to ensure the city's existence after oil is no longer abundant in the area. Odessa is also a stop on—and a supporter of—the La Entrada al Pacifico trade corridor. In 2003 Family Dollar Corporation opened its 8th distribution center in Odessa's new industrial business park. Telvista, an inbound customer service call center, opened its doors in 2004 in its own new building in the industrial park. Coca Cola built a new distribution center in Odessa in early 2007. Growth in construction of new retail in the city's Northeast side has increased in recent years, with 3 new shopping centers currently planned and 1 in the construction phase. Many hotels have also been planned with some in the completion phase. In November 2007, the city approved a contract with a company that develops armaments for U.S. Army helicopters to begin operations in Odessa.

Odessa has also taken steps to diversify the energy it provides. A new wind farm has been constructed in Northern Ector County.[19] A new clean coal plant has also been announced for a site previously entered in the Futuregen bidding. The new plant will be run by Summit Power and will be located near Penwell.[20] This new plant could lead to the creation of 8,000 jobs to the area.[21] There are also plans for a nuclear power plant to be run in conjunction with the nuclear engineering department at UTPB, called HT3R, or the "High-Temperature Teaching and Test Reactor". This reactor is planned to be near Andrews. There have also been recent visits from prospective developers of a solar collector in the area.[22]

The Ector County Coliseum is host to the Permian Basin International Oil Show on every even numbered year.

The jack rabbit has become the symbol of Odessa. Beginning in 1932, Odessa held a rodeo for roping rabbits. In one competition, cowgirl Grace Hendricks roped a rabbit from horseback in five seconds and beat her male competitors. The unusual rodeo ended in 1977 because of objections from the Humane Society.[23] Many businesses and residences about Odessa display models of rabbits.

Midland International Airport is served by:

A reality series on the TV Guide Channel followed the reporters of the local CBS affiliate, KOSA-TV. The show was titled Making News: Texas Style.[26]

A portion of the Tommy Lee Jones film The Three Burials of Melquiades Estrada was filmed in Odessa.[27]

The truTV reality show Black Gold is based on three oil wells outside of Odessa, as well as some locations in Odessa, such as the local Hooters restaurant.[28]

Odessa is mentioned in James A. Michener's Texas as a city where “[y]ou are more likely to be murdered ... than in any other city in the nation”.

Odessa is used as the hometown setting for Claire Bennett and her family in Season 1 of the NBC show Heroes.

In the 1999 Elmore Leonard novel Be Cool, singer Linda Moon is in a band called Odessa. This band is based on The Stone Coyotes who even wrote a song Odessa, specifically for the book[29].