|imagesize =
image_caption = district of downtown Goliad, Texas; the Von Dohlen Building is named for a former member of the , . 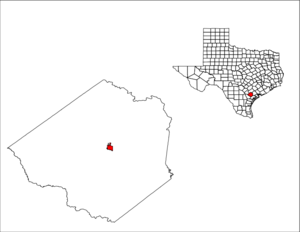 Goliad is a city in Goliad County, , . It it had a population of 1,975 at the 2000 . It is the of Goliad County.GR|6 It is part of the Metropolitan Statistical Area. The , best known for the River Walk in San Antonio, passes through Goliad en route to the . Goliad is located on , named also for the late .

In 1747, the Spanish government sent to inspect the northern frontier of its North American colonies, including . In his final report, Escandónt recommended that be moved from its Guadalupe River location to the banks of the San Antonio River, so that it would be more capable of assisting settlements along the .

With the conclusion of the in 1763, France ceded Louisiana, and French claims to Texas, to Spain. [Weber (1992), p. 198.] With France no longer a threat to Spain's North American interests, the Spanish monarchy commissioned the Marquis de Rubi to inspect all of the presidios on the northern frontier of New Spain and make recommendations for the future.

The area was again the target of invaders in 1821. After the United States and Spain signed the , giving all rights to Texas to Spain, many Americans were angry. On , the 52 members of the captured La Bahia. Four days later, Colonel Ignacio Pérez arrived with troops from Bexar; Long surrendered.

In 1829, the name of the village of La Bahía was changed to Goliad, an of "Hidalgo" (omitting the silent initial "H"), in honor of the patriot priest , the father of 's independencia.

On , , in the early days of the , a group of s attacked the presidio in the . After a thirty-minute skirmish, the Mexican garrison surrendered, leaving the Texians in control of the fort. The first declaration of independence of the was signed here on , . Texians held the area until March 1836, when the Texian garrison under was defeated at the nearby . The Texian survivors were imprisoned at the presidio until , , , when they were executed in the .

Goliad was the birthplace of the famous Mexican General , commander against the in the battle of on , .

On , , a devastating tornado struck Goliad, killing 114 persons. It is tied for the deadliest tornado in Texas history and the 10th deadliest in the United States.

There were 749 households out of which 33.9% had children under the age of 18 living with them, 51.7% were married couples living together, 12.8% had a female householder with no husband present, and 30.8% were non-families. 28.7% of all households were made up of individuals and 15.8% had someone living alone who was 65 years of age or older. The average household size was 2.49 and the average family size was 3.04.

* - a weekend racing festival held twice a year (March and October) at the Goliad Airport near Berclair, Texas.