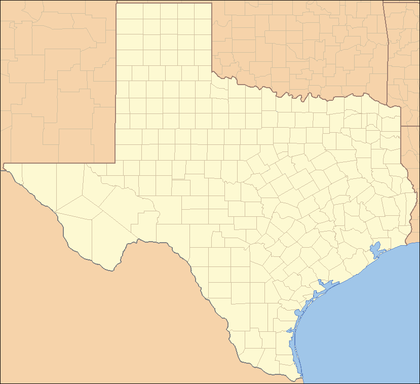 The state of Texas is divided into 254 counties, more than any other U.S. state.[1] Texas was originally divided into municipalities, a unit of local government under Spanish and Mexican rule. When the Republic of Texas gained its independence in 1836, there were 23 municipalities, which became the original Texas counties. Many of these would later be divided into new counties. The last county to be initially created was Kenedy County in 1921, but Loving County is the newest county; it was first created in 1893, abolished in 1897, then re-created in 1931.[2][3][4]

Each county is run by a commissioners court consisting of four elected commissioners (one from each of four precincts drawn based on population) and a county judge elected from all the voters of the county. In smaller counties, the county judge actually does perform judicial duties, but in larger counties the judge's role is limited to serving on the commissioners court. Certain officials, such as the sheriff and tax collector, are elected separately by the voters, but the commissioners' court determines their office budgets, and sets overall county policy. All county elections are partisan.[5]

While the counties have eminent domain power and control all unincorporated land within their boundaries, they have neither home rule authority nor zoning power. The county is responsible for providing essential services (except for fire and ambulance, which are often done by volunteer fire departments).

Unlike other states, Texas does not allow for consolidated city-county governments. Cities and counties (as well as other political entities) are permitted to enter "interlocal agreements" to share services (as an example, a city and a school district may enter into agreements with the county whereby the county bills for and collects property taxes for the city and school district; thus, only one tax bill is sent instead of three).[6] School districts are independent of county and city government (with the exception of the Stafford Municipal School District, which is city controlled).

J.R. Gonzales of the Houston Chronicle stated that in county seats in many small towns in Texas, the county courthouses have very prominent roles in the town's government and society. Gonzales said "For anyone who has ever driven through a small Texas county seat, it’s easy to see how important the county courthouse is to the community. Ideas and concepts like politics, government, commerce and law all take root around that building." Gonzales said that in large urbanized areas like Harris County, "especially today, that notion tends to get lost when living in such a large area."[8]