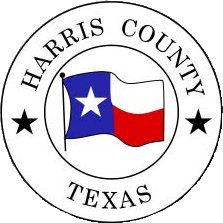 Harris County is named for John Richardson Harris, an early settler of the area.

The county was founded on December 22, 1836 as Harrisburg County and Harrisburgh County. The name was changed to Harris County in December 1839.

Harris County operates its own system, the .

In addition, Houston has the , a city-controlled public library system.

The cities of , Bellaire, Deer Park, and Pasadena have their own city-controlled libraries.

Harris County also has a constable for each of its eight precincts and hundreds of deputies assigned to each. They mainly serve in a patrol function, established to maintain peace in the county as well as providing security to county buildings such as court houses and district attorney's offices.

The head of a Texas County, as set up in the , is the , who sits as the chair of the county's . As of 2007, this position in Harris County is held by Judge . The county is split into 4 geographical divisions called s. Each precinct elects a to sit as a representative of their precinct on the commissioners court and also for the oversight of county functions in their area.

Other elected positions in Harris County include a , a , a , a District Clerk, a , 8 s, a Tax Assessor-Collector, a County Treasurer, and every in the county except s, who are appointed by the officials of their respective cities.

Within Harris County, hospital services for the indigent and needy are provided by the , a separate governmental entity. Harris County Hospital District operates three hospitals: LBJ General Hospital, Quentin Mease Community Hospital, and , as well as many clinics.

Additionally, numerous private and public hospitals operate in Harris County, including institutions in and throughout the county.

Many areas in Harris County are served by (METRO), a public transportation agency headquartered in .

The , a parole confinement facility for males operated by , is in Downtown Houston, west of . [" [http://www.tdcj.state.tx.us/stat/unitdirectory/xm.htm SOUTH TEXAS (XM)] ." "". Accessed , .]