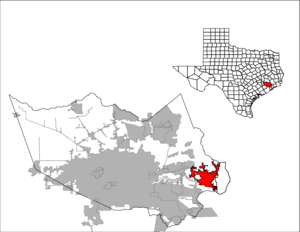 Baytown is a in Chambers and Harris Counties in the Gulf Coast region of the of . Located within the Houston–Sugar Land–Baytown metropolitan area, it lies along both State Highway 146 and Interstate 10. As of the 2000 , Baytown had a total population of 66,430 (though the census estimate placed the city's population at 68,371) and it is the fourth-largest city within the metropolitan area.

The area of Baytown began to be settled as early as 1822. One of its earliest residents was Nathaniel Lynch, who set up a crossing at the junction of the and . The ferry service that he started is still in operation today, now known as the . Other early residents of Baytown include William Scott, one of 's Old Three Hundred, and Ashbel Smith, who owned a in the area.

The city now known as Baytown was originally three separate towns. The first of these was Goose Creek, named for the bayou of the same name where Canadian Geese wintered and whose name is still reflected in the area's Goose Creek CISD, whose establishment dates back to before 1850. This was followed by the rival communities of Pelly in the late 1910s, and East Baytown in the early 1920s. The "East" in East Baytown was later dropped because it was west of Goose Creek.

Serious talk of merging the three cities began shortly after , but the community of Baytown was opposed to this idea. However, in 1947, the three cities finally agreed to . The citizens settled on the name Baytown for the new combined city. Baytown as it is known today was officially founded , .

In 1916, the Humble Oil & Refining Company, founded by one-time Texas governor and his associates, built the first offshore drilling operation in and the second in the . The company later built the , which would become one of the largest Exxon Refineries in the world. Since then, many other refineries have been built in the area. is still one of the major employers in the city and now runs over ten plants in the area.

Another major industry in Baytown began in 1970 when opened the Texas Works near the city. The 48 seamless pipe used in the was produced at the facility's pipe mill. The plant was officially closed in July 1986 (never reopening after a nationwide strike against the company), due to a poor economic climate and the decline of American in the 1980s.

In 1988, opened. It is a major complex featuring (NHRA) races and a robust weekly drag racing program. The venue accommodates 40,000 fans and is one of the most respected racing facilities in the state. In 2000 the venue added a state-of-the art High-Banked dirt oval race track that hosts races each year from March through October.

Baytown is bordered by water on three sides. Along the south and west is Galveston Bay. On the east is Cedar Bayou. The city of roughly bordered along the north by Interstate 10. Portions of the city to the east of Cedar Bayou reside in .

There were 23,483 households out of which 39.2% had children under the age of 18 living with them, 52.9% were married couples living together, 14.2% had a female householder with no husband present, and 27.5% were non-families. 23.0% of all households were made up of individuals and 8.0% had someone living alone who was 65 years of age or older. The average household size was 2.80 and the average family size was 3.32.

Because of Baytown's industry, it serves as a central city for several communities in the Eastern region of Greater Houston including the eastern portion of Harris County, western Chambers County, and south-western Liberty County. Also, the city is a primary city of the Houston&ndash;Sugar Land&ndash;Baytown metropolitan area.

is a regional shopping mall that opened in 1982 and is one of the largest shopping malls in the region. However, economic changes in the area have left the mall largely vacant. The city is also home to major retail establishments such as , Target, , , , and .

"The Baytown Sun" serves as the region's newspaper.

The is a in Baytown run entirely by volunteers. The theater has been in operation for 45 years (as of 2007) and is one of the longest continuously running community theaters in the state of Texas. The theater typically produces six shows each year from September to August, with each show giving seven performances.

In July 2007 a woman driving a passed out at the wheel and drove into the side of the Baytown Little Theater and came to rest in the middle of the arena theatre stage. The organization is currently working at finding and securing a new space.

Baytown is served by the . Based in Baytown, the district has 14 elementary schools (grades K-5), 5 junior highs (grades 6-8), 2 high schools (grades 9-12), a career center, and two alternative centers for education. The district serves all of Baytown, Highlands, outlying areas of East Harris County, and a small portion of western Chambers County. The two local high schools, Robert E. Lee (opened in 1928) and Ross S. Sterling (opened in 1966) have long had a friendly rivalry between them.

Following several years of research and debate, voters passed a $120 million bond referendum in 2005 to improve present facilities and replace several existing schools and build new ones. Included in this package is a third high school, a new elementary school, and plans for a sixteenthth elementary to be drawn. One junior high school and one elementary school are due to be replaced. Lee High School will be reformatted to a smaller campus and the auxiliary campus will be converted to its original purpose as an alternative educational center. Additionally, the district will add new classrooms and improve its football stadium.

is the home for varsity football and soccer for GCCISD as well as for the annual . The stadium seats approximately 16,000 fans, making it one of the largest high school sports venues in the nation. It is currently undergoing a renovation of its press box and has newly installed turf and scoreboard.

Goose Creek Memorial, the third High School, will be completed in the fall with the first class for the 2008-2009 school year.

The City of Baytown operates the Sterling Municipal Library [http://www.baytownlibrary.org/] . In addition Baytown residents are served by the system.

center) connects to I-10 via highway 146, with the connecting southwest to La Porte.]

Baytown is served by METRO express route 236 during the rush hours, sending commuters to [http://ridemetro.org/pdf/routes/eastcorridor.pdf] .

Baytown is linked to Interstate 10 ("see map") by State Highway 146 (Lanier Freeway), Business 146 (the former Loop 201) and Spur 330 (Decker Drive). It is also linked by the , which crosses into the city from nearby La Porte; the bridge was built in 1995, replacing the Baytown Tunnel, to allow a deeper ship channel.

Fire, rescue, and hazardous materials response is provided by the .

Emergency Medical Services are provided by Baytown EMS, a division of the Baytown Health Department.

Baytown Branch is located in Baytown.